Lee: Another month and another monster sized outlay of cash. DH has a ton of great books and tpb’s this month so close your eyes if you’re poor.
Thomm: Help, I’m blind! 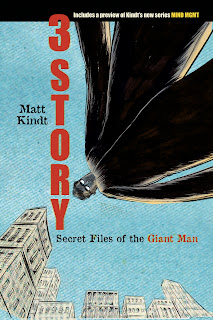 3 STORY: SECRET FILES OF THE GIANT MAN
Matt Kindt (W/A/Cover)
FC, 32 pages, $3.50, One-shot
The most acclaimed graphic novel of 2009 returns! Some episodes from the life of Craig Pressgang were too sensitive even for the pages of 3 Story: The Secret History of the Giant Man, but now the full truth of his years as a spy can be told! Lending new meaning to the phrase “hiding in plain sight,” Craig’s missions to Paris, Cairo, and the Philippines make Secret Files an essential companion to the 3 Story graphic novel, as well as a perfect standalone introduction to Matt Kindt’s touching history of the Giant Man. Collects all three Giant Man stories from MySpace Dark Horse Presents.
• Visionary artist Matt Kindt returns to his most beloved creation!
• Includes a preview of Kindt’s new series, Mind MGMT!
• 3 Story is in production as a major film!
Lee: Kindt is just a fantastic creator that continues to impress year after year. I loved the first 3 Story book (see here) and will eagerly get this.
Thomm: I appear to have missed this one entirely. It looks interesting. And considering Lee’s lead-in, $3.50 may be as affordable as I’m going to get out of this post.

Even better, less affordable books below the break… 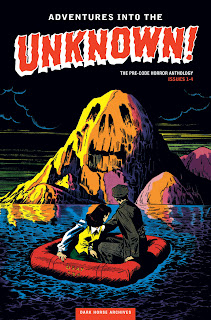 ADVENTURES INTO THE UNKNOWN! ARCHIVES VOLUME 1 HC
Edvard Moritz (W/A), King Ward (W/A), Mac Elkan (W), Fred Guardineer (A), Al Feldstein (A), Leonard Starr (A), Al Ulmer (A), and Paul Reinman (A)
FC, 216 pages, $49.99, 6 5/8” x 10 3/16”
The first ongoing horror comics anthology, Adventures into the Unknown! is finally collected into a series of deluxe hardcovers! The pre-Code delights found in this debut volume include inventive, exciting tales like “The Living Ghost,” “Kill, Puppets, Kill,” “The Affair of Room 1313,” and the ongoing “True Ghosts of History” feature—and contributions from Golden Age greats Fred Guardineer, Al Feldstein, Leonard Starr, Edvard Moritz, and others! Adventures into the Unknown! Archives Volume 1 reprints the first four issues of the popular, long-running horror anthology, which ran from 1948 to 1967.
Lee: This is the first in a long line of expensive books this month. I am huge fan of pre-code horror and this is right up my alley. But, this presents a very interesting dilemma. I can get these books for free from WOWIO here.  Granted it’s digital only but I can read the same material and spend nothing. Another problem is that most of the art is by Edvard Moritz. He a good artist but not a great artist. Starr and Feldstein are the main attractions but their total output in less than ¼ of the book. I really want this but it’s tough to justify that price.
Thomm: “Kill, Puppets, Kill” 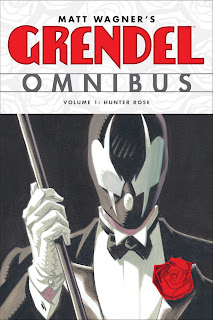 GRENDEL OMNIBUS VOLUME 1: HUNTER ROSE TP
Matt Wagner (W/A), Tim Sale (A), David Mack (A), Duncan Fegredo (A), Mike Allred (A), Guy Davis (A), Teddy Kristiansen (A), Ashley Wood (A), Mike Huddleston (A), and Dean Motter (A)
b&w&r, 600 pages, $24.99, 6˝ x 9˝
Matt Wagner’s masterpiece celebrates its thirtieth anniversary with the first-ever comprehensive collection of the complete Grendel saga! The first of four volumes presenting the entire series and following the chronology of the stories, this edition introduces millionaire Hunter Rose and his alter ego, the criminal mastermind Grendel!
Volume 1 reprints Grendel: Devil by the Deed; the short story collections Grendel: Black, White, & Red and Grendel: Red, White, & Black, featuring a host of legendary guest artists; and the epic Grendel: Behold the Devil.
• The complete series, collected for the first time!
Lee: This is a collection of post prime Grendel. Devil by the Deed was a backup story in the first Mage series, and the BWRed’s collections were from ’98 and ’02 respectively. That doesn’t mean the material isn’t good, quite the opposite, it’s very, very good. But it isn’t the material I want. Why hasn’t the first issues been collected? What are we starting here?
Thomm: It is a strange place to start. Something billed as the first of four volumes collecting the entire series I would expect would start at the beginning, but Dark Horse is going with presenting the stories that, while produced later, come before the stories that were actually the first ones published. I’m guessing these stories aren’t necessary to read the series starting at its initial publication point, unless Grendel was printed the way Fox showed Firefly, all out of order to suit executives. 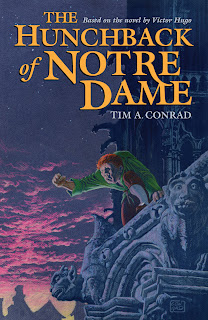 THE HUNCHBACK OF NOTRE DAME HCTim Conrad (W/A)
FC, 48 pages, $12.99, 7” x 10”
Tim Conrad adapts Victor Hugo’s classic romance about a beautiful gypsy girl, Esmeralda, who is framed for murder by the infatuated Archdeacon of Notre Dame. Only Quasimodo, the hideously deformed bell-ringer of the cathedral, can save her.
Religious extremism, class distinction, fate, destiny, and sexual dynamics are played out in a rousing yarn of intrigue within the walls of the Parisian cathedral of Notre Dame.
• Tim Conrad’s first comic book work in over twenty years!
Lee: I love Tim Conrad and for that reason alone I may get this book. Even though he has a limited comic book catalog, Tim is one of the greatest Conan/Sword Sorcery artists ever. It’s incredible to look at. It should work perfectly for the Hunchback.
Thomm: With that pedigree, his art seems perfectly suited for this story. 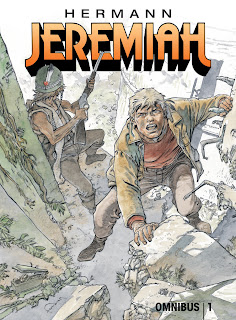 JEREMIAH OMNIBUS VOLUME 1 HC
Hermann (W/A)
FC, 152 pages, $24.99, 8.375" x 10.875"
One of Europe’s most revered comics classics comes to America! At the end of the twentieth century, the United States is overcome by race hatred, and the ensuing civil war leaves only a few million survivors and a shattered society. Forced by circumstances into a series of violent moral compromises, innocent Jeremiah and his cynical friend Kurdy attempt to find their place in the postapocalyptic world without descending into savagery. Collecting the first three volumes of the acclaimed series, the Jeremiah Omnibus is one of the darkest, most dangerous sci-fi stories in comics!
• The inspiration for the Showtime series developed by J. Michael Straczynski!
• Direct Market exclusive. Only 500 copies offered in the United States.
Thomm: I love how often postapocalyptic predictions in works of fiction are off the mark. Scout was like that, too. But, like Scout, Jeremiah is a really good book. I have a few re-print issues from more than 20 years ago and have hung onto them all these years, though they have no monetary value. I’m sure I’d enjoy a larger collection like this.
Lee: I knew you were a huge fan of this! I’ve heard so much about it, and it’s been reprinted in various forms for so long that I can’t miss this. I am excited to finally see what all the hub-bub is about. 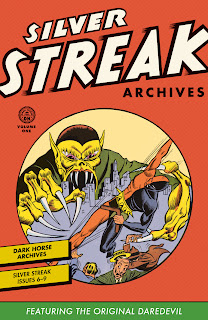 SILVER STREAK ARCHIVES FEATURING THE ORIGINAL DAREDEVIL VOLUME 1 HC
Jack Cole (W), Jack Binder (W/A), Bob Wood (W/A), Dick Briefer (W), Ralph Johns (W/A), Kane Miller (W), Jack Cole (A), and Fred Guardineer (A)
FC, 280 pages, $59.99, 6 5/8” x 10 3/16”
Debuting in 1940 in Silver Streak Comics #6, the original Daredevil was a mute superhero who used boomerangs and his athletic abilities to wipe out American mobsters and international criminals. Capturing readers’ imaginations as he fought his nemesis, the evil Claw, the original Daredevil was a popular recurring character and eventual headliner in his own comic book series. In this volume, the first four expensive and hard-to-find Silver Streak Comics are finally collected in a deluxe hardcover volume! In addition to reprinting the original Daredevil’s debut episodes and early work by Jack Cole (Plastic Man), this essential volume of comic book treasures will present every story, gag strip, and text piece from the original anthologies!
Lee: Ugh, I am going to get this but I have no clue about the quality. It’s ’40’s superheroes so it’s going to be clunky at best. Then again, Jack Cole (the reason I am getting this) wrote Plastic Man which is still great today. The kids and I both read the entire Plastic Man series last year. It’s a big expense but if you can swing it, then it’s worth it.
Thomm: Dick Briefer? I can’t speak to the quality of this work at all, but I can speak to the need for a name change.
Lee:  Don't be making fun of DB!  He was one of the greats of the Golden Age.  I have a stack of his stuff in my collection and it's all great.


Lee: Lots of expensive stuff that is going to test my will power. Jack Cole is calling me though so I might have to cut elsewhere to afford it.
Thomm: Grendel and the Hunchback are the most interesting to me. Can I borrow your Plastic Man, though? My dad was a big fan and I’d like to see why.
Posted by Lee at Tuesday, January 31, 2012