So, what did I read this week? Well, I managed to slog through a bunch of junk and one amazingly, spectacular book. I even managed to browse a bunch of books which did nothing but annoy me. 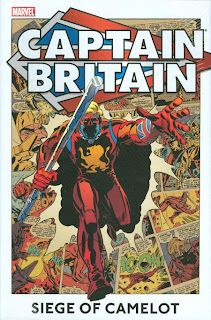 What was so bad that it annoyed me?  Marvel reprints is what!  I recently picked up Captain Britain Vols 1 and 2.  They are great (relatively speaking) Marvel Bronze age stories with some pretty decent art.  Actually, truth is that I have a couple of the original issues and I want to see how the story ends.  The only problem is the reproduction is absolutely terrible.  The art is muddy and about as poorly reproduced as I have seen in a long time.  Boy loves it but he's never seen the original material.  It's too bad because this shoulda-woulda-coulda been so much better.  The same thing is true of Marvel's Asgardian Wars collection.  There is no reason the art should be crappy in that book.   One page is a perfect reproduction then the next page is missing have the black lines.  Sure, all the color is there but where did all the lines go?  I understand, and even expect it to a certain extent, given the age of the Captain Britain stories but X-men reprints from the 80's?  There's no excuse for that.

So what did I read this week that was good? I managed High Moon, Criminal Macabre Omnibus Vol 2, and Unwritten Vol 1. You can see what I loved and didn’t below the break. 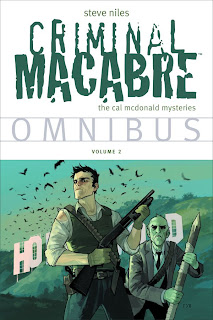 Cal McDonald, a private detective who specializes in the supernatural, is the 'hero' of the Criminal Macabre series.  Accompanied by his faithful sidekick, who just happens to be a dead person, he gets into all sorts of trouble.  It doesn't help that on his good days he gets the crap beaten out of himself by the police, and on bad days he gets beaten up by cops and vampires.  Needless to say he's not a happy camper so he takes it out on every werewolf, vampire, and zombie that crosses his path!

This is an interesting collection.  It certainly isn't bad, but I'm not sure it was good either.  It falls into that terrible grey area of... fine.  The art is very, very good.  Hotz is a modern master of horror comics and he does his typical great job.  Stakal's style is as different as different can be but works well for the material.  Jones's art was disappointing because I know he can do better.  Overall, from an art perspective it's a very pretty book.

The problem is Cal McDonald.  Niles has taken the down on his luck noir detective trope and amped it up by 100%.  Normally this is fine, but 300 pages of your 'hero' getting his ass kicked gets old.  It's hard to root for a guy whose 'mask' consists of band-aids all over his face.  Not to mention that he really has no redeeming qualities aside from his ability to swear like a drunken sailor.  Other than that, the action comes fast and furious and the monsters are always interesting which makes up for the protagonists obnoxious streak.

I guess I would liken this to a poor man's John Constantine.  If you like horror and detectives you will enjoy it.  If you're looking for cutting edge, look elsewhere. 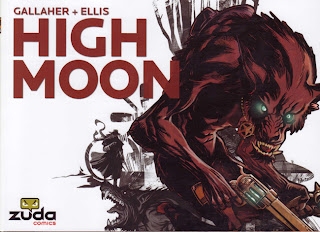 If you've ever wondered what would the wild west look like if it were populated by werewolves and vampires then this is the book for you.  You can read the first issue for free here.   Just scroll down to find it.

Zuda was DC's attempt at creating web comics from 2007-10 in which readers could vote for their favorite comic which would then be printed in actual comic book form.  This collects the first winner of the competition.  It even won a Harvey Award for best online work in 2009.

High Moon, like Criminal Macabre is beautiful to look at.  Steve Ellis has been around for awhile and knows how to tell a visual story.  Ellis is a fantastic character designer and his monsters are just awesome to look at.  His colors are great too and work really well.  If it were just about the art the book would be awesome.

But, the story in this case is just ok.  Gallaher is new to comics and it shows.  It isn't that he over writes so much as he doesn't adequately connect the dots.  This was especially true in the first story.  As Gallaher attempts to build tension he forgets to make the lead interesting.  Or to explain why certain actions are occurring.  Normally this wouldn't matter if it weren't for the fact that one of the leads dies at the end of the first arc.  It gets better as the the book progresses but the rough start made it hard for me to get back into it.

It's a fun read as long as you don't mind logic gaps and the art really saves it. 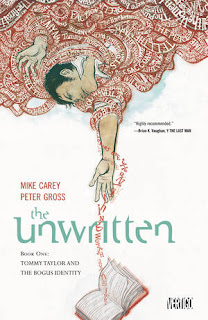 A condensed verion of the hype from Amazon:
Tom Taylor is the son of Wilson Taylor and the unwilling namesake of the protagonist in his dad's wildly popular 13-book fantasy series.  His father created the Tommy Taylor fantasy series, boy-wizard novels with popularity on par with Harry Potter.  The Tommy Taylor cottage industry of movies, video games, and geek-ridden conventions is given an extra dash of drama by Wilson's having mysteriously disappeared years before, leaving a cynical Tom (who inherited none of his millions) to eke out a grubby living at paid appearances. The book picks up speed fast when Tom realizes some elements of Wilson's stories might not be made up.


I probably don't need to say anything about this because it is so good but let me lend my voice to the chorus.  It's just great.

Unlike the other books this week which were all about the art, this is all about the story.  Carey scripts a taut tale unlike anything I have read in a long time.  It is pure Vertigo!  Basically, it's what if Harry Potter stepped out of the book and into the real world?  Throw in lots of references to classic literature and you have winner.  It's not often that I am at a loss for words but this book does it too me.  Carey  creates intriguing characters, action packed sequences, and AND at the same time tickling my geeky-nerdy funny bone by teaching me all sorts of stuff about the geography of classic literature.  As soon as I read that Room 101 from Orwell's 1984 was a real place.. I was sold!

Gross's art is, as always, very good.  His art has never been splashy or over the top.  It's just... good.  Except for a couple of places where he distorts anatomy to make all the characters fit into a panel it's great.

If by any chance you aren't reading this then you need to jump in because this is great.