Selling Off The Collection

So my recent move to Florida has caused me to seriously re-evaluate what the heck I’m doing with all the hard covers and trades that I had accumulated. When you have to actually move the stuff and in my case unpacking all of it you get a startling revelation, I have way too much sh*t. I easily have over 1,000 hard covers and trades. Even if I live to 100 I would never have the chance to read all of it. 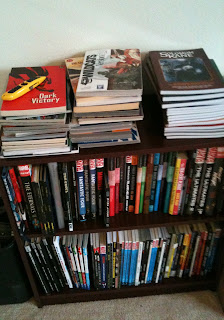 Of course a lot of the material I have read before when I was growing up or during the last few years I would think, great series I will get the collected version and re-read it. Ha, it almost never happens. Between getting involved in a book club, my real job and all the new stuff I get I hardly ever sit down and read any of the stuff I get and I want to read it all.
So I have started selling a bunch of it and have over 100 auctions going on at Ebay (see seller id jlm1955707). I expect some to not sell, in fact I expect a fair amount not to sell, which means I will probably give away some of it or relist stuff for a second round (I have found that often stuff sells the second time, just a matter of finding a buyer who is looking).  Picture to the left what I have to list and sell on Ebay. Pictured to the right what I have on EBay, there is a second stack behind the first. 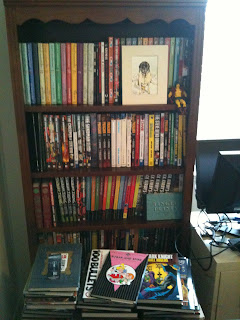 What has been interesting to me is that in evaluating what I own and what I want to keep there is a fair amount of stuff I’m can let go of. Now the first round has cut out some stuff, but round two is where I have to start evaluating what I actually own. One example is pre-code horror stuff. I ended up with a ton of it with EC Archives, Marvel’s Atlas Era material and other books from other publishers. I like that material, but I do not need 25 to 30 books of it, so it is a matter of evaluating the entire amount of what I have an winnowing it down from 30 to say 20 books. Some of the Marvel Masterworks went into the Bronze Age and that material is actually pretty weak, so some of that can go also. Pictured to the left one of four bookcases that are still stuffed to overload. 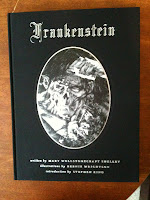 I hope after round 2 I will be down to what I would consider reasonable, but I have to realize that even though I got rid of my floppies years ago and send out my new stuff, I need to have a very narrow focus in what I want in the future. For me it will be high end hard covers (see photo to the right) and original art work and even there I will have to temper it or there will be another sale down the road.
Posted by Jim at Friday, February 10, 2012