Indies Previews For April Part 1 of 3

Lee: Another month and and huge list. I really need to filter some more. Then again no I don’t because it’s all really good. Except for the couple of books that were so bad I had to pick those too.
Thomm: I vote for more of the really bad ones. Those are fun in their own special way. But maybe Gwen should have a say, seeing as this is her regular gig. 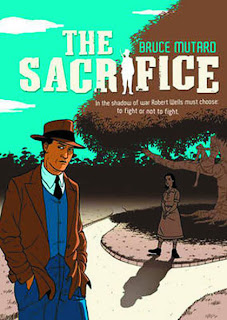 Allen & Unwin
Robert Wells Trilogy Vol. 01: Sacrifice GN by (w/a/c) Bruce Mutard
Set in Melbourne in the shadow of World War II, this graphic novel, the first in the Robert Wells trilogy, deals with war, ideals, family, and love. As the world spins out of control into World War II, Robert and his family wrestle with the challenges it presents. Robert offers his apartment to German-Jewish refugees, Artie intends to join up as soon as the fighting breaks out, and Robert's communist sweetheart Elsa answers the call of capitalism. When Robert befriends Mata, he embarks on a soul-searching journey with an uncertain ending. $24.95 See a preview here.
Lee: In a sign of restraint, I only picked this book from Mutard but you really should follow the link and look at both books that are offered. As for the books, Mutard seems to have a solid handle on people and interpersonal relationships so the books look to be very interesting. The art seems good enough so this is worth checking out.
Thomm: This has a lot of the things I like in a good story, including a historical setting and well- rounded characters. Highly appealing.

It's a HUGE month starting with 7 more books below the break. 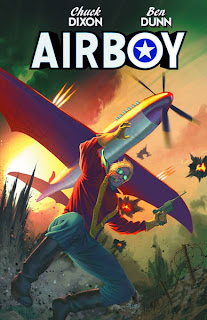 Antarctic Press
Airboy: Deadeye #1 of 5 by (w) Chuck Dixon (a/c) Ben Dunn
World War Two is over, but Airboy's work isn't done! Davy Nelson, the teenaged fighting ace known to the world as Airboy retrurns to the skies in this brand new limited series! Using his miraculous plane, Birdy, Davy finds and defeats a Japanese air ace holding out on a remote island. When he visits the man in postwar Tokyo, Airboy uncovers a conspiracy that could plunge Japan into the maelstrom of war once again! $3.99
Lee: This should be titled Airboy, the character that would not die! Granted Dixon worked on the Airboy series back in the 80’s but I am wondering if anyone still cares. It’s got a good creative team so it should be good so it just depends if I have any money left over at the end of the month.
Thomm: I liked the book in the ‘80s. I don’t know if it can still carry on. I wonder how miraculous Birdy is in the jet era, too. She could be taken out real fast. 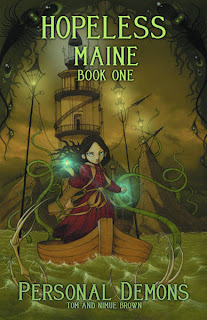 Archaia Entertainment LLC
Hopeless Maine Vol. 01 HC by (w/a/c) Tom Brown
Trapped on an island off the coast of Maine, the people of Hopeless find life a little darker and more dangerous with every day that passes. The number of orphans rises continually, but who can say what happens to their parents? Plenty of the bodies are never found. This is not the stuff of happy, careless childhoods, it is instead fertile ground for personal demons. In Hopeless, the demons are not always abstract concepts. Some of them have very real teeth, and very real horns. $19.95 You can read the webcomic here.
Lee: A couple of years ago I was skeptical about the webcomic format but these days I am sold. I think this is the first of 3 or 4 wc collections that I liked this month. The story seems really good from a brief read and the art is just fabulous. My only complaint is the lettering looks pasted on and not actually part of the art.
Thomm: Why does Nimue Brown get credit on the cover of the book but not in the solicit? Why would anyone live on an island called Hopeless? In Maine, no less. It could be good but is it aping Locke & Key? 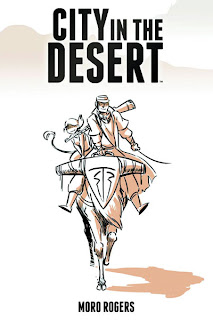 City in the Desert Vol. 01 HC by (w/a/c) Moro Rogers
Monster hunter Irro is perhaps the only person in Kevala making a good living. The city pays him and his tailed assistant, Hari, a bounty for each monster carcass they bring in. But one day a religious sect called The Way of Sacred Peace comes to Kevala to solve the monster problem by capping the city's Spirit Fountain. Out of a job with all the monsters gone, Irro and Hari are determined to prove there is a more sinister plot behind Sacred Peace's plan. $24.95 Visit Moro’s sketch blog here.
Lee: Even though the cover is sparse, I like the art. It’s has a nice fluid style that appeals to me. The story sounds good too, and I like Archaia, so I’ll probably take a chance on this.
Thomm: Now this I like the looks of. As Lee said, the art is spare, but that’s no detriment. I like the premise more because of the questioning of what seems like a good idea with an apparently good outcome. Fun conspiracy stuff. 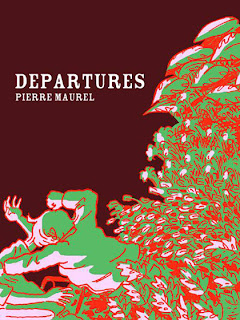 Blank Slate
Departures GN by (w/a/c) Pierre Maurel
In his English-language debut, Pierre Maurel explores the effects of the global recession through three tales of twenty and thirty-somethings struggling at the bottom of the social ladder. An unemployed man suspects he is going insane as his everyday life is invaded by visions of sprawling vegetation, a bookseller debates joining a union the media describes as local terrorists, and a couple prepares to begin a new life on the road together. All faced with the opportunity to make a difference in their lives, will they accept their situation or attempt find a new way of living? 72 pgs, $14.99  The artists blog here and yes it’s all in French but it’s still really cool and worth the visit.
Lee: I’m not sure I am sold on the concept although the “english language debut” makes me think it will be good. Actually, if a British publisher is willing to publish a French book then it must be good. Other than that, the garish colors on the cover really appeal to me. Maybe because it makes my eyes burn when I look at it for too long.
Thomm: Took me a moment to realize the cover’s not some sort of sci-fi monster. Interesting use of color for shading. Somehow I feel like it’s a solicit for 100 Bullets without the violence. 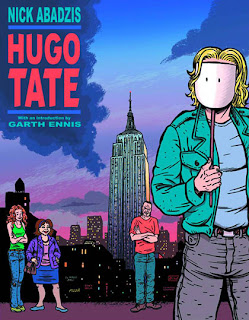 Hugo Tate GN by (w/a/c) Nick Abadzis
Originally serialised within the pages of influential comics and music magazine Deadline between 1988 and 1994, Hugo Tate appeared alongside titles such as Tank Girl, irrevocably changing British comics in the process. Beginning his life in print as a stick-man in a figuratively drawn world, readers witnessed the eponymous Hugo visually develop alongside the comic itself. Now, after 15 years of clamouring from fans, the complete six-year run is finally collected in a single volume, including extra features. Introduction by Garth Ennis. 192 pgs, $19.99 Visit the artists site here. http://www.nickabadzis.com/
and a podcast with the artist from TCJ here.
Lee: If it was published beside Tank Girl then it must’ve been good. Then again, Tank Girl is an acquired taste so maybe… Anyway. I love the concept of a stick man gaining shape and form over the years.
Thomm: Very interesting concept. I’ll try to overlook the recommend from Ennis. 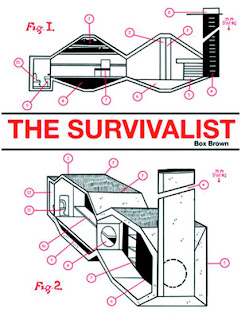 Survivalist by (w/a/c) Box Brown
Conspiracy theorist Noah is the lone survivor of the cosmic catastrophe after taking shelter in his underground bunker. Slowly growing sick of the monotony of being the supposed last man alive, Noah sees his days of wine and irradiated roses grind to a halt when a mysterious female, Fatima, arrives on the scene. Though at first Noah suspects her to be a terrorist, a significant relationship blooms amongst the wreckage, forcing Noah, at long last, to genuinely connect with someone. 42 pgs, b/w, $7.99 2 preview pages can be seen here.
Lee: Few publishes get the trifecta from me because there is usually so much other good stuff but holy poopy pants is Blank Slate on fire this month. The previews remind me of Chris Ware or even Seth in terms of page structure and line style. It’s a little pricey but it’s got potential to be really good.
Thomm: Definitely pricey but a well-founded premise and real potential in the story. I wonder why Noah would think a terrorist would be coming round to his door. If they’re the last two people, what’s the point in being a terrorist? Downgrade to bully. That ought to do. 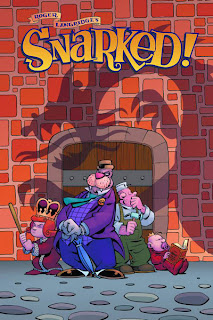 Boom! Studios
Roger Langridge's Snarked Vol. 01 by (w/a/c) Roger Langridge
Journey with Roger Langridge, the Harvey Award winner behind The Muppet Show and Thor: The Mighty Avenger, as he pulls the carpet out from under such Lewis Carroll classics as The Walrus and The Carpenter, Through the Looking Glass, and The Hunting of the Snark, creating an all-new world of humorous grandeur! Join Princess Scarlett as she and her baby brother Rusty outwit the villainous royal advisors and team up with the infamous Walrus and Carpenter to set sail in search of their father, the Red King, who has been lost at sea for six months. It's a rip-roaring action-adventure comedy you won't want to miss, featuring exclusive behind-the-scenes content and commentary from Roger Langridge! $14.99
Lee: It’s Roger Langridge. It’s Snarked! It’s finally collected so I am going to buy it and love it and read it and hug it and read it again. And if it’s not to profane give it to my kids so they can love it and read it and hug it and read it again.
Thomm: I read the Free Comic Book Day sample. It was a lot of fun. Might not be for the kids, depending on your barriers around childhood.

More books tomorrow but not as many good ones.  How's that for a teaser?
Posted by Lee at Wednesday, February 22, 2012