Afterthoughts of Last Week and Why Dark Horse Screwed Me


Well I have finally made the move to Florida and this is the first Monday column that I’m typing from Seminole, Florida. My wife is happy to be less than 4 miles from the beach and I will be doing my real job from home, so have to say I will love my commute. My new digs are nice and must be one of the five homes in Florida with stairs which I like since it reminds me more of where I lived. I always have thought stairs in your home were a good thing.
As you can see I changed the title and since it will take a few weeks to get back into a normal swing I have decided to just call this column a goofier name for now. Also I will do more than discuss comics at times since when I started this blog lo those many years ago the idea of Comics And, besides a homage to my store from the nineties, was to allow for more than comics to be commented on. 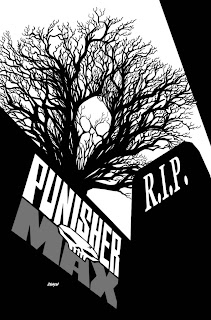 Still the book of the week for me is Punishermax #22 by Jason Aaron and Steve Dillon. Those of you who have read my meanderings from time to time know that I have always advocated the growth and aging of characters as that leads to better stories. There is no reason why Bruce Wayne needs to be Batman forever. Scott Snyder proved that with his Detective run entitled Black Mirror. That was the best Batman run done in comics in close to 40 years. I think you have to go back to Denny O’Neil and Neal Adams work on Batman to find a comparable story line that was as good. Back then the Ras As Ghul story was not strung together as tightly but it is still a story that has stood the test of time. Punishermax has now shown what could have been a great story within the regular Marvel Universe. The epilogue of Frank’s death in last issue is first and foremost a powerful story. The scene where Nick Fury is drinking with Frank in a casket was just a great scene. To me the crux of the entire series showed that the better and more powerful story is watching how a character goes through life and death. How we face death is as important as how we live our lives. Frank’s death defines him and puts a cap of his career. There is no reason why a younger man could not lose everything and decide to become the next Punisher, but one who is current and up to date on all the new technology. It would make for a better story.  This was a great run and will be one of those series that I will buy a hard cover collection of it they did it right. 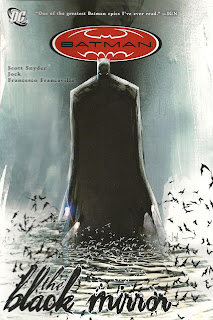 Something I read one time that we love something more because it is impermanent. If something will be the same forever it loses its value. That is what has happened to all of the Marvel and DC characters. No matter how neat the new take on Daredevil is or how good a story the current take on Wonder Woman is, it is still just the same thing over and over. The writers try their best to break out of the box, but we are still left with the same thing. The Ultimate Universe is an attempt to change things, but it is limited in scope, the new DCU instead of growth hit the reset button that changed what they wanted it to change. I have no affinity for these characters anymore and could easily stop reading all of it. In fact I have been reducing and reducing my list quite a bit. Instead of building on what was established DC tries to do a reset as does Marvel. Even when they introduce younger characters it is always half hearted because you know they will never actually replace any older heroes. Think about the stories of Green Arrow, Ollie was better dead as Connor was a cooler version of Green Arrow. Since Kevin Smith wanted to write about Ollie they did some bullsh*t comic thing to bring him back. Now the new DCU has tried to make him into the Smallville version. None of it works because it is no longer an organic continuation of a story; it is editorial mandates trying to market a character instead of letting creators have fun and then seeing if they can market that idea. Harry Potter and other cultural phenomenon are seldom created by a marketing gimmick (also see Star Wars).
In the long run I believe it would create a broader and more long lasting readership if we allow things to have beginnings, middles and ends. Punishermax showed us how powerful and great a story about endings can be and the industry needs to follow suit. Heck even though I’m not a Bendis fan I’m watching from afar with great interest about the new Spider-Man. I personally think $4 an issue of such a slow moving story is not worth my money and I think the new Spider-Man is too young, but if I wanted to read any Spider-Man book (which I don’t) it would be Ultimate Spider-Man. Kirkman has shown the way with Walking Dead and Invincible, what happens in their stories matter to the character for all time. 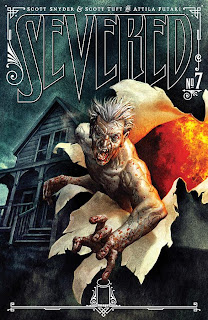 Next up is Severed #7 (of 7). Scott Snyder, Scott tuft and Attila Futaki told a great story. Even better instead of this being a one and done we find out the Salesman is not just a horrible cannibal that he is something more and maybe an immortal creature. This made me both like it more and also less. On one hand I would have been happy with this being a one and done type of story. I’m curious to know if this was the plan from the beginning or is the popularity of the series made them decide to change the story to give them an outlet to tell more stories of the Salesman. Of course now that we know he is a cannibal and most of his secrets the next story will have to try a different tack. I will say this much, if I read or hear from Scott Snyder that this was the idea from the beginning I will believe him as I think Scott Snyder is a straight shooter about stuff and does not lie like the marketing type hacks that DC and Marvel often put front and center. I want to get the hard cover on this book, but I have to put it on the back burner until I sell off a lot more of what I already own. 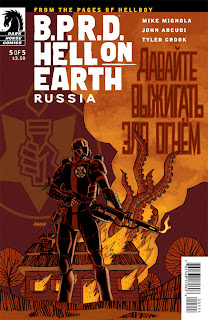 Now onto my bitter disappoint of the week, BPRD Hell on Earth Russia #5 (of 5). I have no clue what week this came out and once again it was another great story in the Mignolaverse. I buy almost every damn book that Dark Horse and Mike puts out. The disappointment comes from the big FU I got reading they have shoved an epilogue into Dark Horse Presents. An eight dollar (I think) comic I no longer get as more than half of the anthology was not to my taste. I have always considered Dark Horse and IDW better companies then to f&*^ their fans over with this type of crap move. I buy the Hellboy Library Editions, the BPRD hard cover collections and get all the floppies as they come out. I’m a fan of the Mignolaverse, to *%#^ me over like this is a classless move. I won’t buy Dark Horse Presents and have to now reconsider if I will continue with BPRD if the story I want to follow is going to be shoehorned here and there trying to cross market something else. I paid my entry fee and feel that Dark Horse is screwing me by putting a small but, according to them, crucial part of the story somewhere else.
Well I had an idea to talk about how I have already started to fake being a red wine snob and was going to offer tips, but that can wait for another time. My new arrangement is working out great as my store Cosmic Comics is shipping my books to me. I have been a customer and friends with the owner for years. These guys treat everyone as good as they treat me and it is great service. I had some trepidation about going mail order and it was shipped and done to perfection. Thanks guys. Next week’s list is BPRD (%$&* them), Warlord of Mars (one of the series), Avengers, Daredevil, New Avengers, Thunderbolts, Uncanny X-Men, Winter Soldier, Batman, Birds of Prey, Catwoman, DCU Presents, Fables, Fables HC Vol 4, GL Corps, Hellblazer, Nightwing, Supergirl and Wonder Woman.
Come on back next Monday, where we do this again.
Posted by Jim at Monday, February 13, 2012