Justice League #5: Something to Replace "Nuke the Fridge" and "Jump the Shark" 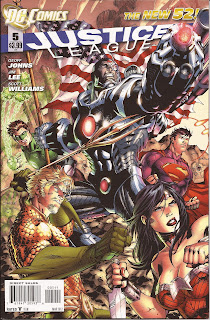 I doubt I'm the only person out there that looks at what happened in Justice League #5 this way, but I've purposely not searched the internet to check. Maybe it was the stressful work week and the dying of my old computer that contributed to my reaction? Nope. That’s too easy of a pass for the creators involved. I’ll use Batman’s own words to damn his actions: “It’s insane.”

For the most part I’ve enjoyed the new Justice League series. It’s like a popcorn movie with
big over-the-top action. However, after a great opening sequence with the Flash and Superman, the issue really fell apart. First there was Hal Jordan’s inane dialogue and then there was the moment. Yes, the moment that will live in infamy right along the ranks of Fonzie
water skiing over a shark in Happy Days and Indiana Jones surviving a ride inside a refrigerator in the middle of a nuclear explosion. Batman removes his cowl and reveals his identity
to Green Lantern. 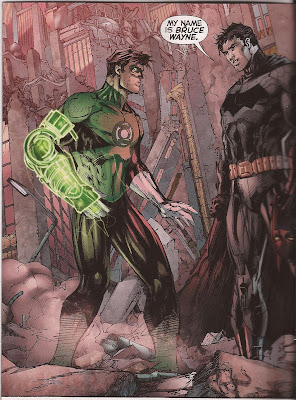 I understand his sentiment that the battle with Darkseid was a much bigger deal than just nabbing criminals in Gotham City. And I realize that the whole move (or I should say removal) was symbolic. However, it was totally out of character for Batman (just watch the JLU cartoon
series). It was also unnecessary. He’d been barking orders to GL for the whole arc, so why the need for the heart to heart now? It also had little effect on the situation, since Hal didn’t even know who Bruce Wayne was.

Then there was the added ridiculous symbolism of removing the Bat-emblem! The inker couldn’t even resist the urge to darken it back in during Bruce’s flight with the parademons. 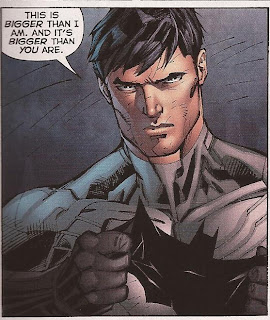 It was BAD and totally derailed the story. TV had “Jump the Shark”, the movies had “Nuke the Fridge”, and now comics have “Remove the Cowl”.

I wonder what today’s “Mr. Batman”, Scott Synder would have
to say about this?
I have no idea if this formatting is even going to work -- still getting used to Windows 7...
Posted by Matthew at Saturday, February 04, 2012