I've dreaded this one for a while now. If Aaron and Ahmed had some New Age elements to it, this is ought but that. Worse yet, while I couldn't find fault with the art in Aaron and Ahmed, the art in The Alchemist has its own significant failings that detract from the book.

The Alchemist was originally a novel written by Paulo Coelho. This review is

of the graphic novel adaptation. Derek Ruiz wrote the adaptation and Daniel Sampere did the art. On the face of things, I wouldn't blame Ruiz for what we have here but reading his introduction, he's bought hook, line and sinker into the theme of Personal Legend.

Personal Legend is Coelho's philosophy that everyone and everything has something it wants to accomplish in life. This is your Personal Legend. The young know it but tend to forget it as they get older, unless they've actually pursued their Personal Legend. You and I may call this following your dreams, some of which are more possible than others. I can have a Personal Legend that I'll be President of the US, but if I wasn't born in the US, that's going to be a problem. Hell, if I'm black and I was born in the US, it's still a problem for a lot of fantacists. On the other hand, wanting to work in comic books since you were eight, like Ruiz, isn't so unrealistic. 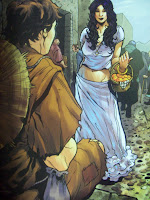 In furtherance of this philosophy, we have the story of Santiago, a Spaniard from Andalusia. He's somewhat indeterminate in age. Everyone refers to him as a boy, but he looks more like a young man. He's a shepherd but is well educated. He dreams of seeing the world, which is why he's a shepherd instead of a student. He meets a merchant's daughter and spends hours talking to her, neglecting to get her name. Nonetheless, he's in love but won't see her again for a year as he shepherds his sheep until it's time to shear them again.

As the year's nearing its end, he has a fantasy of slaughtering all his sheep. 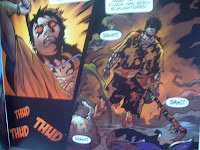 I have no idea why this isn't his Personal Legend. It's never brought up again as the story continues. For all I know, the whole rest of the book Santiago is pursuing the wrong Personal Legend. He really should have killed all his sheep in a melange of blood and wool.

But that's not what happens. He goes to a gypsy to interpret a dream he's had where he's tending the sheep when a young girl comes and plays with the sheep. When he goes to talk to her, she touches him and they are transported to the Great Pyramids. The child looks at him and says "If you come here, you will find a hidden treasure."

Then, he meets an old man who tells him fate is a lie. 'Course, the old man also tells him he's a king named Melchizedek who was born in Salem. This king knows a lot of Santiago's personal information and convinces him to follow the dream to Egypt. During the course of this convincing, there's a lot of exposition about Personal Legend. The king also says he can take different forms. He's starting to remind me of a benevolent Zeus.

Despite the king telling him fate is a lie, after Santiago has decided to pursue his Personal Legend, and dropping the hot merchant's daughter he was so in love with as easy as pie, the king says "There is a force that wants you to realize your personal legend; it whets your appetite with a taste of success." This is an explanation of beginner's luck (which doesn't actually exist, either, but that's my two cents, not Coelho). Um, if there's a force that wants you to realize your personal legend, how's that different from fate or destiny? It seems like merely a matter of degree, as the Personal Legend force doesn't have the power or will to force you to achieve your Personal Legend, while Fate is writ in stone. Personal Legend is a lot like Free Will, another forced attempt to explain human freedom in the face of an omipotent and omnicient deity.

Before sending Santiago off to Egypt, the king gives him a black stone and a white stone, called Urim and Thummim. If Santiago can't make a decision, he can use the stones, which represent yes and no, to make it for him. That's a hell of a way to make a decision. To further delay things, because we're taking a long time to get this mission under way, the king provides a parable, of which he is fond of doing, I suppose so we don't forget his parallels with Jesus. The point of this particular parable is that you can't focus on your goal and enjoy the beauty of your surroundings at the same time. That's a really crappy parable.

Two weeks later he's in Tangier, where he's promptly ripped off of all his money by a grifter. He knows no Arabic, knows nothing of Islam, and has no assets. He ends up working for a crystal merchant, helping the man expand his business. We get some of the tenets of Islam thrown in for good measure, such as the duty of a good Muslim to feed the needy. 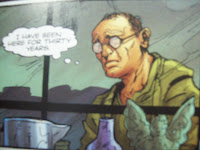 Nine months later he's worked enough to save and gather what he needs to continue the trip to Egypt. He's learned some Arabic, from what I can glean. He pays his way onto a caravan that's crossing the desert to Egypt. One of the other travelers is an Englishman who's in search of an alchemist. The Englishman is a into apocrypha and the whole secret language bit. He'd like to read Promethea, I bet. 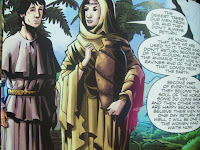 The caravan reaches an oasis just in time to be stuck there due to a war between desert tribes. The Englishman searches for the alchemist there, and Santiago falls in love at the first sight of an Arab woman who lives at the oasis. Fatima sits and talks with Santiago everyday when she goes to get water. He tells her of the soul of the world, which is more of this Personal Legend business. She decides he's her Personal Legend (which, if you think about it, is better known as dependence).

The oasis bit drags on for a while, then Santiago's looking at hawks flying and has a vision of an army attacking the oasis. He tells the leaders at the oasis. When the army attacks, the defenders are ready, which they otherwise wouldn't have been because tradition forbade attacking an 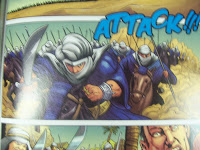 oasis, a neutral site. The defenders kill all but one of the attackers. When asked why they broke tradition, the lone survivor says it's because they were thirsty. Really? The point of the tradition was that everyone could use the oasis without fear of attack, so there wasn't any need to attack. Doesn't make the least sense to me. 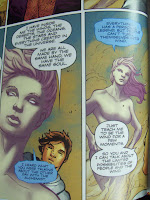 But back to our tale. We get an odd bit where Santiago and the alchemist ride into a military camp where they'll be killed if Santiago can't turn himself into the wind in three days. Now, the military leader didn't come up with this demand. The alchemist offered it up. Of course, Santiago, on the third day, and after much consternation and hemming and hawing, talks to a female embodiment of the wind, who directs him to talk to the heavens, who direct him to the hand that created all. The hand turns him into wind. Ta-dah!

Santiago and the alchemist arrive at an outpost of some sort of monks or something. It's not clear. The alchemist turns some lead into gold and gives some to the monks and Santiag 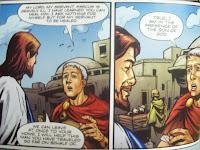 o. Before they go their separate ways, as they're now only 3 hours from Santiago's goal of the Pyramids, the alchemist tells him a story of a Roman who dies saving a child. An angel comes for him and he asks to be shown that his son's words live on. But it's not the son who was a poet. His poems are forgotten in the future. It's the son who was a centurion. He converts to Christianity and famously meets Jesus. The lesson of this story is that "No matter what he does, every person on Earth plays a central role in the history of the world." So, now we're into chaos theory.

Santiago reaches the Pyramids and starts digging when he sees a scarab beetle. He just finds a few rocks when a band of refugee toughs comes upon him. They slap him around a bit, thinking he's buried gold there. He tells them about his search for treasure based on his twice seen dream. The leader of the toughs mocks him and tells Santiago that he had the same dream twice at that very spot. In that dream there was treasure buried at the roots of a sycamore that had grown in the sacristy of an abandoned church in Spain. The toughs then leave Santiago, who now realizes the treasure he was promised is back in Spain where he started. And now we've reached the Wizard of Oz. 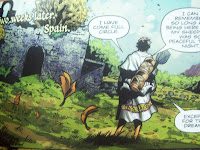 He goes back to Spain, digs up his treasure, and heads back to the oasis to Fatima. Somehow the journey back to Spain only took 2 weeks. Considering it took him 2 weeks to reach Tangier on the outbound trip, it seems that bit of gold the alchemist gave him wasn't taken by the toughs and bought him much faster passage from Egypt to Spain.

This is one muddled philosophy. We have Greek mythology, Islam, Christianity, Judaism, Apochrypha, Gnositicsim, chaos theory, and the Wizard of Oz all jumbled together to reach the idea that people should follow their dreams. A bit of 42nd Street, that. Actually, I'd have enjoyed a comic book version of 42nd Street more. But I think it's fairly obvious the failings of the writing, so I'm not going to belabor it.

The art, on the whole, is good enough. Sampere has good proportion, angles, shading, and so on. The major failing of the work is an utter unfamiliarity with gun technology. It's never said what time period we're in for this story, but from what I can tell it's some time af 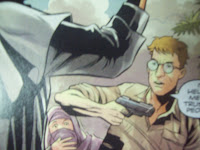 ter 1492 but prior to the Renaissance. The Moors are no longer ruling Spain, so it has to be after 1492, but as near as I can tell there's no sign of the Reformation at this time. Travel times and technologies shown also indicate we're probably sometime in the 1500s. 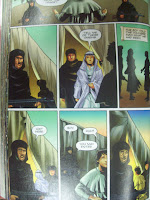 y out of place with the 1500s are both the pistol that the Englishman brandishes and the defenders of the oasis utilize. It's no wonder they wiped out the attackers at the oasis. The attackers appear to have only swords and spears, which would be fine against guns of that era, but these guys have repeating rifles, a technology that wouldn't be seen for about 300 years. The pistol is even more advanced, looking like something from about 400 years in the future. Sampere may as well have given Santiago a digital watch while he was at it. As it is he gave the Englishman a shirt from Banana Republic.

If you're into New Age or just don't mind skipping over a lot of soft headed exposition that goes on for pages at a time, particularly a lot of stilted exposition that would be better seen as a thought balloon than a word balloon (as there are occasional thought balloons), then have at it. If you want a well crafted story, then try something else. Somehting like Echo, perhaps. On the plus side, reading this as a graphic novel has to be better than reading the original novel.
Posted by Thomm at Sunday, February 26, 2012