Indies Previews For April Part 3 of 3 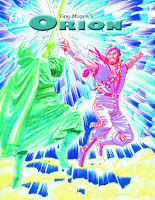 Hermes Press
Gray Morrow's Orion SC by (w/a/c) Gray Morrow
Hermes Press is reprinting the entirety of legendary artist Gray Morrow's Orion from the pages of Heavy Metal magazine. Orion is Morrow's sword and sorcery masterpiece about an Errol Flynn-like swashbuckling hero who battles evil on a strange and mystical world. Most of Orion will be shot directly from Morrow's original hand-colored artwork, and reproduced in full-color along with Morrow's Edge of Chaos series, originally published by Pacific Comics. Proceeds from Orion are going to Morrow's wife Pocho Morrow. Accompanying Orion will be a biographical essay by Irving as well as more samples of Morrow's inimitable artwork and storytelling. 144 pgs, $39.99 Read about Morrow here. 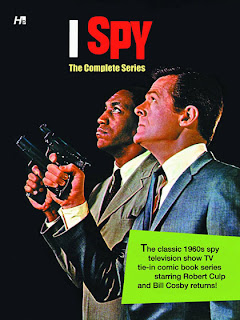 I Spy: Complete Series Vol. 01 HC by (w) Paul S. Newman (a) Alden McWilliams
One of the greatest spy shows from the 1960s, I Spy, returns with Hermes Press' new deluxe reprint of all six Gold Key comics' issues of the feature. Included in this complete reprint are informative essays about the creative team behind the comic book and loads of never-before seen publicity photographs featuring stars Robert Culp and Bill Cosby. Artwork by Al McWilliams (issues #1-5) and Mike Roy (issue #6); scripts by Western Publishing mainstay Paul S. Newman. 256 pgs, $49.99 Read about McWilliams here.
Lee: Sigh, if only I was rich. Morrow is one of the realistic greats of old. He worked on daily strips such as 'Secret Agent X-9', Rip Kirby and Tarzan. As such he wasn’t well suited for superheroes which is why many aren’t familiar with him. But his art is eye popping amazing. The same is true of McWilliams. He worked on Star Trek comics and many others and is just amazing. Sadly, he too is unknown to most fans. I have no clue if the I Spy stories will be any good (I doubt it) but the art will be great. Now only if I were rich.
Thomm: I think Morrow’s the better bet, based on the history of comic adaptations of movies and TV. I’ve seen some Morrow stuff, too. Even if the story is weak, the art is great.
Lee: A late find, a complete I Spy story can be read here. It was better than I thought.
Thomm: It’s not bad, but I don’t get the personalities of Cosby and Culp coming through the way the show did. Just looking at the pictures from the show that are with the sample I got more of the personality the two actors brought to the characters.

Eight more books below the break, it's a huge month I tell ya! 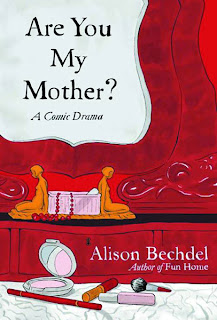 Houghton Mifflin Harcourt
Are You My Mother? A Comic Drama HC by (w/a/c) Alison Bechdel
Alison Bechdel's Fun Home was a pop culture and literary phenomenon. Now, a second thrilling tale of filial sleuthery, this time about her mother: voracious reader, music lover, passionate amateur actor. Also a woman, unhappily married to a closeted gay man, whose artistic aspirations simmered under the surface of Bechdel's childhood - and who stopped touching or kissing her daughter goodnight, forever, when she was seven. Poignantly, hilariously, Bechdel embarks on a quest for answers concerning the mother-daughter gulf. $22.00 Visit the author here.
Lee: Yep, this outta be a laugh a minute. Eeewwwwww. But once you get past the obvious angst and depression factor I bet this is really, really good. Bechdel is a very accomplished creator so you know you’re in good hands.
Thomm: Sorry, I’m still chuckling at the web site name. Is it a warning of danger or beacon for talent? Anyway, it’s not going to be a happy little endeavor, obviously, but a well told sad tale can be very funny, too. Check out Angela’s Ashes, for instance.

Humanoids Inc
Koma GN by (w) Pierre Wazem, (a/c) Frederik Peeters
Addidas is a bright and quirky young girl who spends most of her time helping her widowed father in his job as a chimney sweep in the industrial metropolis they live in. When she ventures too far into a chimney, she encounters a bizarre new friend. Their meeting will topple the mysterious forces at work! $29.95
Lee: Koma was published as 6 individual volumes in France. I am hoping that this collects the entire series! Peeters art is typical French style with loose line and form a greater structure. Humanoids hasn’t let me down yet so this is another easy buy for me.
Thomm: Sounds like a fun read. Does she have a relative named Puuma or Niike? 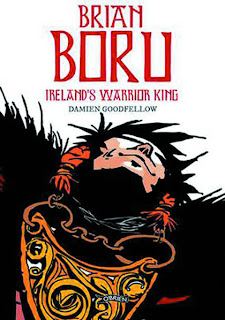 O'Brien Press Ltd.
Brian Boru: Ireland's Warrior King GN by (w/a/c) Damien Goodfellow
The rise of a local chieftan to become High King of Ireland, fighting native and Danish invader alike in a whirlwind of constant conflict. The peace of the ancient forests and glens of Erin is shattered while the ghosts of the mythical Fianna look sadly on. Men's lives are controlled by the seasons and powerful warlords. Brutal tribal warfare ensures glory and riches for some, slavery and destruction for others. From the dark misty shores west of the Shannon, Brian, son of Cinneide, battle his way to the pinnacle of Irish power in this stirring graphic novel that tells the life of Ireland's most famous chieftan. $24.50  Preview pages can be seen here.
Lee: IDW is printing stories about Russian history which is plenty violent so I couldn’t pass up a chance to mention this book. The Irish give the Russians a run for their money in wars of pointless violence and bloodshed. This is the real life Conan if you like that kind of stuff. Goodfellow appears to be influenced by Mike McMahon of 2000ad fame. It has thick blacks and fairly angular lines. I love it but it’s not for everyone.
Thomm: I love this kind of stuff. Historical works are, when done right, great. If you like Northlanders, you’ll probably like this. 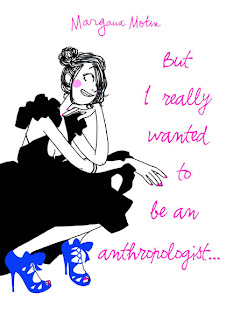 Selfmadehero
But I Really Wanted to be an Anthropologist GN by (w/a/c) Margaux Motin
But I Really Wanted to Be an Anthropologist... is an introduction to the world of Margaux, a charming 30-something living in Paris, navigating the world as an illustrator. This diary documents her day-to-day existence with her boyfriend and young daughter, drinking and smoking, and the difficulties of a persistent and precocious child. Anyone who's ever worn inappropriate shoes to the supermarket or danced around the house in their underwear will be charmed by Motin's irreverent humor. $24.95 Read her blog (in French) here … or just go look at the pretty pictures. You can see something here.
Lee: AAUUGGGHHHH FIRETRUCK. I skipped this in my pull list for my store and now I have to go back and add it in. Motin’s art is just fantastic and reminds me of Jules Feiffer (see here) with a line that is to die for. Add that to slice of life French style and this is not to be missed.
Thomm: Uh-oh. Lee’s on a trip down memory lane in France. My first thought is George Costanza, who really wanted to be an architect, but then I watch too much TV. Unlike the fictional George, this appears autobiographical. Not that one’s better than the other. Just a better chance of it being from the heart with Motin. 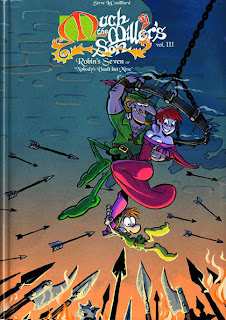 Steve Lecouilliard
Much the Millers' Son Vol. 03 HC by (w/a/c) Steve Le Couilliard
Much the Miller's Son is Robin Hood's least Merry Man in this Xeric Award-winning graphic novel. Short, shy, anxious, and in debt to criminal mastermind Will Scarlett, Much had better overcome his fears and keep a clear head as he gets roped into Robin Hood's daring plan to rob the castle vault right under the nose of the Sheriff of Nottingham! 64 pgs, $20.00  Read the webcomic here.
Lee: Ok, when the quote on the back is: Fart jokes archery and tits. Really great witty comics. --Brandon Graham (King City, Multiple Warheads) … yep I am sold. I glanced at the strip and before I knew it I had spent 20 minutes reading it. It’s a risqué version of Robin Hood. Very good stuff.
Thomm: Lesser, borderline heroes are always a good source of amusement, especially in juxtaposition with the upright heroes, or the upright heroes taken to an extreme. Add some T&A, and you’re good to go. 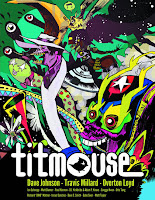 Titmouse Inc
Titmouse Vol. 02 HC
Titmouse is filled with a new batch of art, comics, and interviews from the art, comic, and interview world's most interesting group of talented artists, comic-book artists, and interview-people. Limited to a print run of only 1,000 copies! $24.99 Visit the site here.
Lee: $25 is a little pricey but Dave Johnson’s story alone is worth it. This is your typical collection with some really good stuff and some ok stuff and lots and lots of pretty pictures in between. Recommended if you have some extra this month but not necessary.
Thomm: This one’s not calling my attention much. Ok, the name is a good choice for getting attention but doesn’t tell me anything about the content. 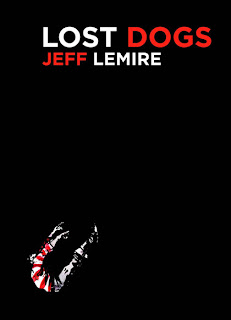 Top Shelf Productions
Lost Dogs GN by (w/a/c) Jeff Lemire
Long out of print, Jeff Lemire's Xeric Award-winning Lost Dogs now returns in a completely remastered edition, soaked with blood and ink. This 104-page mythic yarn follows a family man who's larger than life - but even he may not be powerful enough to prevent the loss of everything he's ever known. Bold, brutal, and emotionally raw, Lost Dogs represents an acclaimed storyteller's first professional work - an early exhibition of the gifts that have made his Essex County and Sweet Tooth so phenomenally popular. $9.95 See a preview here.
Lee: If you like Lemire and want to see how he got where he is, start with his Essax County work. If you love Lemire and want to read everything he’s every done, then buy this. It seems a little crude, as it should be since it’s his first work, but you can see the hints of greatness to come.
Thomm: I’m late on the Lemire bandwagon, but Essex County is great and the trades I’ve read of Sweet Tooth have been engaging. I’m liking his Animal Man, too. For $10 I can swing this early work, too. 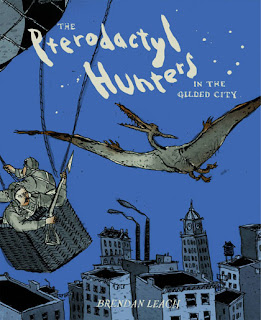 Pterodactyl: Hunters in the Gilded City (One Shot) by (w/a/c) Brendan Leach
Winner of the Xeric Award in 2010 and included in Houghton Mifflin's Best American Comics of 2011, The Pterodactyl Hunters (in the Gilded City) tells the story of Eamon and Declan Sullivan, young members of New York City's Pterodactyl Patrol, a municipal organization protecting the city from the menacing pterodactyls that plague its evening hours. As the New York City of 1904 moves into the modern era, only a few vicious pterosaurs remain. While Eamon makes headlines eradicating the final beasts, young Declan faces a future without the pterodactyl infestation, and without his anticipated role in a new generation of Pterodactyl Hunters. 44 pg, 11 3/4" wide x 14 3/8” high , $9.95. See a preview here.
Lee: Top Shelf is another publisher that always seems to find good stuff. This looks to be another feather in their cap. A strong premise, art which has that indie scratchy feel, and over sized, what’s not to love?
Thomm: I like the idea of some introspection into what it means to be so good at your chosen field that you driver yourself out of business. Kind of like the buffalo hunters of old. Making it sci-fi leaves any moralizing as theoretical, rather than wrapped up in the politics of real such things, like rhinos in Africa and Asia.

Lee: What a crazy month.  There were lots of good stuff out there.  Some really expensive stuff but most of it was affordable.  I'm thinking the big winners of the month were the web comics in book form.  They are starting to appear in this list more and more.
Thomm:  As a publisher it only makes sense to grab something that already has a web appeal.  Whether that means those books are any good is another question.
Posted by Lee at Friday, February 24, 2012