Aaron and Ahmed: A Love Story

Oy. Well, I promised I'd get to these last couple of library books, so here I am. Not only was this

not a good book, it's a rare miss for Vertigo, so far as what I've read over the years.

Aaron and Ahmed was written by Jay Cantor, drawn by James Romberger, colored by Jose Villarrubia, and lettered by Jared K Fletcher. There's nothing wrong with the art, coloring or lettering. They're not outstanding, but they do the job they're supposed to do in relaying the story. 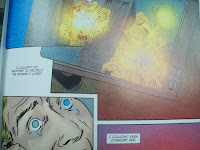 The problem is what Jay Cantor has written. The basic plot is that Aaron is a psychologist in the Army on 9/11/01 when his wife is killed on one of the planes that flew into the Twin Towers. This tragic experience causes Aaron to volunteer to be an interrogator at Guantanomo Bay, Cuba. Cantor shows the water boarding and other methods used to glean information from detainees, as well as the possible psychological harm to the interrogators.

I suppose that's what the story is all about. What harm are we doing ourselves i 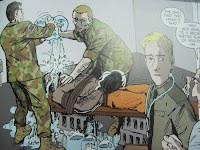 n treating these prisoners in this way? That would be an interesting story, but the way Cantor goes about it is just strange. An evidently fictitious interrogation method involves chanting (or at least some sort of mystical use of words) as a means to brainwash. This is believed to be something the Taliban and Al-Qaeda are doing to create suicide bombers, so the Army supposes it could be used to turn prisoners into agents or to turn off potential suicide bombers who have been programmed. 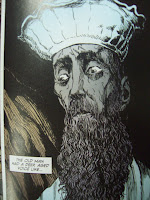 It's kind of New Age theory. Well, it seems like that to me because it doesn't seem to have any sound basis in science. To me, it derails what could be a good story. Cantor goes further off the rails by having Aaron somehow manage to get himself and Ahmed, a prisoner who had been a driver for bin Laden (a touch of reality because the actual driver for bin Laden was a named plaintiff in a Supreme Court decision giving the prisoners some rights), released to go to Pakistan for further study and infiltration. It all gets very trippy with whether Ahmed has been turned, Aaron has been turned, or the two of them are engaged in a love affair. Hell, it could be all three, near as I could tell. 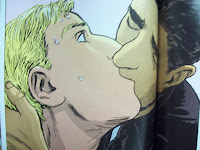 both acting to infiltrate this mystical Muslim operation while at the same time recognizing that he's been programmed to perform some sort of operation for them. He says to himself at one point that he wants to get back to Gitmo to be deprogrammed. It's like a Manchurian Candidat 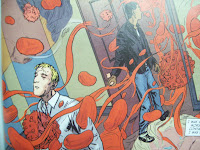 e who knows he's a Manchurian Candidate but doesn't want to be. It's a fundamental mispresentation of how the brain works. A person aware of so-called programming would easily not act on that programming. It's not like the brain is a computer that can be programmed. At best, programming a person is a suggestive thing which may not be acted out.

As to be expected, there's no happy ending. This is moralizing, not happy time. There's the hint 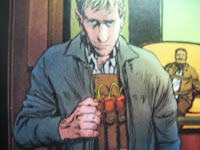 of a good story in here, but it's so far buried in a bunch of psuedo-psychological babble, all mixed up with drug therapies, street drugs, and homoeroticism, that any possible good story is lost. A couple of blurbs on the back of the book claim its a mash up of Balzac, Delillo, and Alan Moore or a read that requires intellect and compassion. I don't know about the Balzac and Delillo references, being none too familiar with either, but even Promethea was a more comprehensible read than this. Aaron and Ahmed gets lost in its pretensions where Promethea added layer and depth to a coherent story. As far as intellect and compassion, my intellect brought me to a screaming halt when the story didn't comport with what I know about the subject matter, and the compassion never arose because I never liked a single character in the book.
I can't recommend this book, even as a free read.
Posted by Thomm at Thursday, February 16, 2012