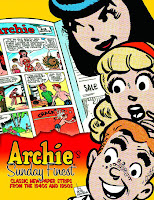 Archie: Sunday's Finest HC by (w/a) Bob Montana
Continuing the Eisner Award-winning series of the rare Archie newspaper strips by Bob Montana, we turn our attention to his remarkable full-color Sunday pages. Archie's Sunday Best is the first-ever collection of the late 1940s and early 1950s color Sunday strips. Montana is approaching the peak of his creative of his juices in these pages, which feature classic Archie themes and characters. $49.99
Lee: These books are soooo good. The material is very funny. The art is stellar. AND the best part is I can read it with my girls because they love it. Viva Archie!
Thomm: I’ve read Archie since I was a kid but I was never that into it. Of course, it was the ‘70s by the time I was reading and the quality probably wasn’t as good. 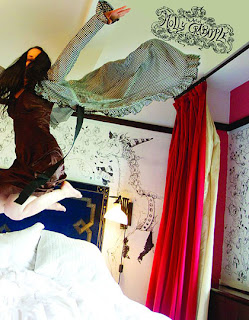 Art of Molly Crabapple Vol. 01: Week in Hell SC
In September 2011, artist and firebrand, Molly Crabapple, locked herself in a hotel room, covered the walls in paper and filled 270 square feet of wall with art. The project, called Molly Crabapple's Week in Hell, is a wild ride through the imagination of an artist stretching herself to the limits of her endurance. Gorgeous photographs by Steve Prue show Ms. Crabapple's sheer talent, audacity, and ambition at work. From the first stroke of pen upon paper to the glorious 360 view of a room full of art, this book chronicles the trials and joys of the Week in Hell, including visits from some of New York City's artistic luminaries, absinthe parties, live models, and musical accompaniment. $9.99. Visit the artist here.
Lee: This is going to get me in trouble but this strikes me as a gimmick. Nothing against her or her art, because I think it’s very good, but the ‘locking yourself in a room’ seems… I don’t know… like a stunt to attract attention. I guess you do what you have to do to sell your art.
Thomm: A stunt? You think? What about this is Hell? A week in a hotel with parties, guests and musical accompaniment is a week of debauch, not Hell. Of course, for me it’s missing that important story element, too. 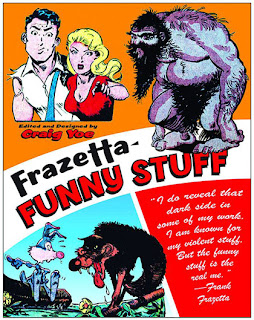 Frazetta's Funny Stuff HC
Frank Frazetta! He's been rightfully called The Grand Master of Fantasy Art! But, it's little known that Frazetta also conquered other worlds in the Golden Age of Comics, as shown in his Donald Duck-ish funny animal and hilarious hillbilly comic book stories. Even those aware of this wonderful Frazetta art don't know the extent--this book is a whopping 256 page, large-format pages! Did we mention ferocious, terrifying wolves and swampland creatures in the plethora of animal stories illustrations as only Frazetta could draw them? There's also lions and tigers and bears--oh my!--before Frazetta's famous paintings captured the same subjects. But wait, there's more! (As they say.) You'll see the roots of the Frazetta Girl in the sexy Kathy teenage girl adventures. And there's the hot Daisy Mae-look-alike, Clarabelle, in the hillbilly hi-jinks stories of her beau, Looey Lazybones (Holy Li'l Abner!). The introduction is by the famed cartoon director Ralph Bakshi who well knew Frazetta and closely worked with him when they co-produced the animated feature film, Fire and Ice. Bakshi shares rare insights, anecdotes, photos and Frazetta drawings. And Bakshi has created a special painting of Frazetta and himself as funny animals for this beautiful hardcover full-color coffee table book! Frank Frazetta's Funny Stuff is edited and designed by Eisner award-winner Craig Yoe. $49.99 You can see Frazetta funny animal scans here and here.
Lee: I am really curious about this but I can’t tell how many actual stories are in the book. Frazetta’s art is always wonderful but funny animal stories aren’t for everyone. I like them but it’s an acquired taste.
Thomm: Frazetta is the one artist associated with comics that I went out of my way to follow. Even made the trip to his studio and museum in East Stroudsburg, PA when I was in high school or college, can’t recall which. So, for me, this is a good bet, even as funny animal rather than fantasy. Still, I’d like to know how much is stories. 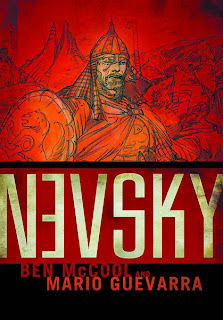 Nevsky: Hero of the People HC by (w) Ben McCool (a/c) Mario Guevara
Written by Ben McCool (Memoir, Pigs) with art by rising star Mario Guevara (Solomon Kane, Victorian Undead), this full-length graphic novel is a stunning re-imagination of Sergei Eisenstein's famed film, Alexander Nevsky (1938). Alexander Nevsky is a central figure in Russian history, having lived during one of Russia's darkest periods--the invasion of the Teutonic Knights. Alexander Nevsky helped establish the Russian nation by defeating the Teutonic Knights, invaders from the last vestiges of the Holy Roman Empire, with an army comprised of ordinary citizens who were poorly-equipped soldiers but fought for their freedom. This ragtag band, against overwhelming odds, defeated the invaders in an epic battle on the frozen lake Peipus--a spectacular achievement that is still celebrated in Russia to this day. In 1938 the great Russian filmmaker Sergei Eisenstein, much acclaimed for his masterful interpretation as seen in Battleship Potemkin (1925) and Ivan the Terrible (1944), brought the story of Alexander Nevsky to life on the silver screen in an innovative and brilliant way, by developing new film techniques that remain in use almost 100 years later by some of the greatest directors of our time. Now, following in the steps of Eisenstein, IDW is proud to present one of the most compelling historical graphic novels ever produced--one that is as relevant today as it was at any time in history! $24.99 You can see all of Guevara’s previews for Solomon Kane here.
Lee: I am always a sucker for historical graphic novels, especially ones with art as good as this. I am not sure why Russian history is the focus but it sounds too good to pass up.
Thomm: This is a great idea. I love historical stuff, too, and Russian history is full of great stories. Russian history is also highly depressing. Every time they fight for freedom they end up back with some dictator or other. Putin’s only the latest iteration. 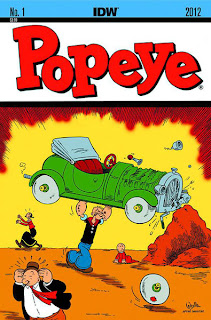 Popeye #1 of 4, (w) Roger Landridge (a) Bruce Ozella
Popeye the Sailor Man sails again! E.C Segar's classic creation is back, with his first original comic in over 30 years! Written by the Eisner Award-winning Roger Landridge (The Muppets), with pitch-perfect art from rising star Bruce Ozella, it's a new take on the classic character that's true to its roots! With a rare incentive cover from legendary Pulitzer Prize-winning cartoonist Jules Feiffer! $3.99
Lee: Even though people scoff, Popeye is a really fun character with a rich history. His early material is great, and even his stories from the 50’s/60’s are good. Landridge is one of the best so this is an easy winner.
Thomm: For some reason I always found the Popeye cartoons really irritating, even as a kid. Not that I didn’t watch them. Pre-cable days, you took your toons where you could find them.
Lee: Don't get influenced by the cartoons.  The original stories are very different.  The spinach thing, which is the irritating element, came later.  This is worth the effort if it uses Segar's stories as inspiration.

Richard Stark's Parker: The Score HC by (w/a/c) Darwyn Cooke
Fresh from his Eisner Award-winning efforts on The Hunter and The Outfit, Darwyn Cooke now sets his steely sights on The Score, the classic Richard Stark Parker novel from 1964. Parker becomes embroiled in a plot with a dozen partners in crime to pull off what might be the ultimate heist-robbing an entire town. Everything was going fine for a while, and then things got bad. Considered one of the best in the Parker series, The Score is the perfect vehicle for Darwyn Cooke to pull out all the stops and let loose with a book that has all the impact of a brutal kick to the solar plexus! $24.99
Lee: The first 2 Parker books were great so I expect more of the same from this.
Thomm: I’ve only read The Outfit, which was excellent. Anything Cooke’s working on has a great chance of being worthwhile. 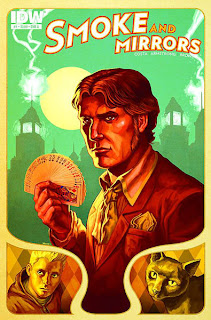 Smoke and Mirrors #1 of 5 by (w) Mike Costa (a/c) Ryan Browne
From the company that brought you Locke & Key and Memorial! Mike Costa (COBRA, Blackhawks) teams with sleight-of-hand artist Jon Armstrong (also a consulting Imagineer for Disney) and acclaimed artist Ryan Browne (God Hates Astronauts)! A stage magician is thrust into a world where magic-not technology-rules, and forced to use trickery and illusions to survive! $3.99 Browne’s bio here.

Lee: I really like the premise of this. A real magician in our world becomes a fake magician in a world of magic. Interesting. I really like Costa’s writing and wish he would get higher profile gigs but I’ll take what I can. This should be good.
Thomm: For some reason I think I read a book or short story that used this premise. It might have been by Alan Dean Foster. I read a lot of his stuff when I was younger. The talent involved here should execute the premise well.

Lee: A fun month overall and something for everyone. Even pauper’s like Thomm.
Thomm: Hey, good stuff and nary a licensed product. Well, republishing of some other’s stuff is close, but there’s no toy company tie-ins.
Posted by Lee at Wednesday, February 08, 2012