As promised or is that threaten, Part 2 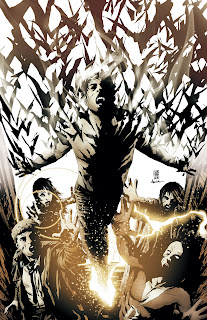 I, VAMPIRE #8
Written by JOSHUA HALE FIALKOV
Art and cover by ANDREA SORRENTINOOn sale APRIL 25 • 32 pg, FC, $2.99 US • RATED T+
As the Justice League Dark team faces the end of all magic – and perhaps life itself – only one man can challenge the dark force known as Cain: Andrew Bennett. He’s back from the dead, but whose side is he on? Regardless of the answer, nothing will be the same for either series when “Rise of the Vampires” is over!
Jim: Absolutely love this series. It has mood, it has a good story and it has some damn fine artwork. I got that this is Vertigo style books done in the DCU. What I find so appealing about this book is that we have different creators then we normally see in the DCU and we have a great story. At first shoehorning it into the DCU felt like a bad idea, but Fialkov has made it work.
Gwen: I would also expect this to be a Vertigo book but I guess as long as the creators make it work... I am a little burnt out on vampires at the moment though. 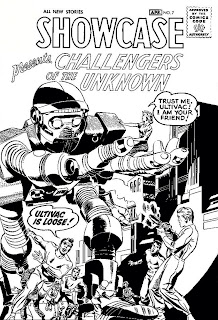 CHALLENGERS OF THE UNKNOWN OMNIBUS BY JACK KIRBY HC
Written by DAVE WOOD and JACK KIRBY • Art by JACK KIRBY, WALLACE WOOD, MARVIN STEIN and others • Cover by JACK KIRBYOn sale JUNE 20 • 320 pg, FC, $39.99 US
Now in one amazing volume collecting SHOWCASE 6, 7, 11 and 12 and CHALLENGERS OF THE UNKNOWN #1-8, these are the original 1950s tales of four death defying adventurers and their incredible exploits.
Jim: I have this in Archives, that I’m trying to sell, but I’m getting this in hopes that this is just Volume 1 in a series. I have no clue what continues to draw me to the Challengers but I have always enjoyed their stories. I especially loved when DC tried to make them into more of a super hero type group even though they are all human, it was pure sixties kitsch with some of the most insane super villains ever.
Gwen: So wait, you're getting something you already own and that you're trying to sell? Don't tell your wife =P 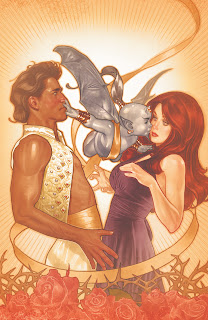 FAIREST #2
Written by BILL WILLINGHAM
Art and cover by PHIL JIMENEZ and ANDY LANNING
Cover by ADAM HUGHESOn sale APRIL 4 • 32 pg, FC, $2.99 US • MATURE READERS
Okay, so Sleeping Beauty has been awakened again by true love’s kiss. But hold on! The thief Ali Baba doesn’t seem a likely candidate for knowing true love from a day-old cruller. So how did this kiss work? We proudly present thrills and chills – and since the Snow Queen is involved, we do mean chills – along with mathematical proof of what does and does not constitute true love.
Jim: Who’s the fairest of them all is the burning question that will be answered by this book. Not really, but I just love Fables and the Cinderella stuff, so this type of spin off series is something I can’t wait to see.
Gwen: I always thought it was great how Bill Willingham made the Prince Charming from all the stories into one guy. This looks like a lot of fun :) 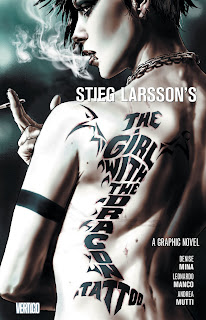 STIEG LARSSON’S THE GIRL WITH THE DRAGON TATTOO SPECIAL
Written by DENISE MINA
Art by LEONARDO MANCO and ANDREA MUTTI
Cover by LEE BERMEJOOn sale APRIL 18 • 32 pg • FC • FREE!
MATURE READERS
RETAILERS: Please see the Previews order form for pricing information.
Just in time for Free Comic Book Day, don’t miss this FREE advance look at the upcoming graphic novel adaptation of Stieg Larsson’s international best-selling thriller!
This opening chapter introduces the dark mystery of the Vanger family, as disgraced journalist Mikael Blomkvist is hired to uncover the truth behind a teenage girl’s disappearance over forty years ago. But before Blomkvist can take on the case, he’s going to be thoroughly investigated by hacker extraordinaire Lisbeth Salander...
Jim: I just read the entire trilogy and enjoyed it. I saw the US movie and thought it was well done, although the mention of what happened with Salander and her father in the movie took away a big reveal in the second book. I’m going to give the comic a try, but the book had too many B, C, D and even E story lines that just padded the heck out of the number of pages in the book. If the Salander story is done more concisely the comic can work out. If they are too faithful to the book the comic could be boring.
Gwen: I'm not a huge fan of comic adaptations of books/movies. Usually the comic tries to put in too much of the story from a novel and the movie to comic adaptations inspire un-inventive artwork because they try to hard to draw the actors. 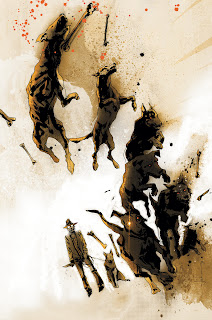 SCALPED #58
Written by JASON AARON • Art by R.M. GUERA • Cover by JOCKOn sale APRIL 25 • 32 pg, FC, $2.99 US • MATURE READERS
Only three more issues of SCALPED left! And no one is safe. Most especially Dash Bad Horse, as all of his sins finally CATCH up to him.
Jim: No reason to mention Scalped as it ends with issue #60 and if you have not been reading this before you will not read it now. BIG MISTAKE. One of the best comic series done and it will go down as Jason Aaron best work. I think he will never be as good as he was with this story. I hope I’m wrong, but something has to be your best and if Jason tops this I will be thrilled to death to buy that series.
Gwen: I've really enjoyed Scalped although I prefer it in its trade form as the story is very detailed and flows wonderfully collected. Everyone I've lent this to has loved it as well.
Jim: That wraps another month from DC. I love my main standards, but the line as a whole is just not making me excited.
Gwen: I am pretty tired of DC as a whole but I keep trucking on for the few gems.
Posted by Jim at Friday, February 17, 2012