From Shadow to Light – The Life and Art of Mort Meskin


So in order to be able to have a post that goes up Monday February 6 I have to work ahead because Friday February 3 I will be driving down to Florida for my move. The transition period has been long and laborious and I’m looking forward to getting back to my life with my wife. A little sad about moving, but everything has pluses and minuses. My preamble is to again reiterate why my Monday column is becoming a little random. 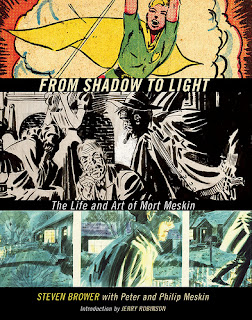 This week I want to discuss the book From Shadow to Light – The Life and Art of Mort Meskin (click on the link to see the Amazon page where you can check out some of the interiors of the book). Mort was a golden age comic artist and as with many from that time his name is not well known. Only the gentlemen who made the transition from golden to silver age have any true renown, many of them toiled in relative obscurity and many will be lost to the vestiges of time. Fortunately people like author Steven Brower and Fantagraphic books are giving us the opportunity to get to know who Mort Meskin was and his story is very interesting.
The book was both a success and also a failure for me. The success part is we did get the life story of Mort Meskin. Essentially Mort was a talented artist who suffered from a lot of insecurities, had some bouts with mental illness, fathered two sons with his first wife, found true love later with his second wife and ultimately moved from comic book work to commercial artwork.
The failure part of the book was twofold. First the book rambled in telling his story. It was not a straight timeline and jumped from giving us a narrative of his life to intermingling interviews and quotes from other people who knew him. This made it an uneven read at best. Secondly the book is called the Life and Art of Mort Meskin. While the book was liberally sprinkled with many examples of Mort’s art, the art was seldom even spoken about. I know we can’t go back in time, but I thought some commentary on the various pages by other artists would have illustrated why he was held in such high regard by so many of his peers and contemporaries.
Still the book did leave me with a sense of the man and his struggles. Also it was an interesting sense of what a different time was like in our society. Mort was institutionalized for what was called a nervous breakdown and his sons were put into foster homes. Mort never put together a successful normal family life from what was portrayed, but his sons, who are listed as co-authors, obviously loved him very much.
His artwork is excellent and due to the crude reproduction from the golden age some of the art is not 100% clear. Still his later ad work and just his pure art are fascinating to look at and see all the various styles he used. I get the feeling Mort was someone who was a true artist in his soul as it seems like he was constantly striving to find the best way to do something.
One of the most interesting things was from a short piece credited to what Steve Ditko said about Mort and that was his story telling ability. I looked at some of his sequential work and even with his innovative panel designs, you could tell what was going on without any words. His ability to tell a story was undeniable. The art itself was also very good. He had a flair for action, wonderful page layouts that were far more innovative then his peers and his work on Johnny Quick showed us Johnny’s movement by the multiple pictures of Johnny as he is running or fighting. A technique that Ditko himself used with Spider-Man to show off his acrobatic moves while swinging around town.
So it is all there and it is a worthwhile read, I just think it could have been a better read. Not worth the cover price of $40 but certainly worth it if you can find it for $30 or less. I’m glad I read the book and certainly feel like I now appreciate Mort Meskin and have a better understanding of what an innovative mind he was in the comic field. I also feel sad for him because I think modern medicine maybe would have helped him. Of course I’m always worried that we may one day cure all of all geniuses and the world will be a sadder and less glorious place.
Next week, maybe we talk about comic books I read.
Posted by Jim at Monday, February 06, 2012