Lee: This is a really odd month from Image. Not odd because of bad books but odd because everything is in the middle of story lines. It’s kinda crazy. On top of that, Image is getting it’s tpb machine rolling so there are lots of trades this month too. It’s starting to look like a Marvel/DC solicit without any characters that I know.
Thomm: Trades work for me. Well, in theory. We’ll see what we have. 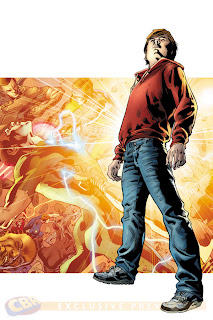 AMERICA'S GOT POWERS #1 (of 6)
story Jonathan Ross
art / cover Bryan Hitch
32 Pages / FC / $2.99
Welcome to AMERICA'S GOT POWERS! It's the biggest TV show on Earth, where the chance to win fame, fortune and get laid are dangled in front of a generation of super-powered teens. All they have to do is WIN. Who is the fastest, the strongest or the greatest? Who survives? Young Tommy Watt's dreams of being the greatest hero of them all might just be shattered when the greatest show on the planet begins to reveal it's dark heart.
Lee: What a great idea this is! It seems to be part American Idol and part Hunger Games/Battle Royale. Hitch’s art has been kinda muddy on his last couple of books so hopefully he’s invested in the book and not just in it for the paycheck. No matter what, it’s worth looking at.
Thomm: It’s The Running Man with super powers. Ok, Arnold’s always a super power freak in his movies. Bet this one doesn’t have a guy playing hockey while wearing a bunch of Christmas lights. 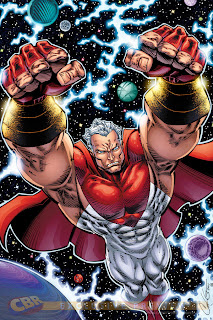 SUPREME #63
story Alan Moore
art Erik Larsen - Cory Hamscher
cover Erik Larsen
32 Pages / FC / $2.99
"REVELATIONS" The legendary Supreme returns! Alan Moore's final Supreme tale is the ultimate jumping on point for new readers! The triumphant return of Image Comics' most powerful hero! As Supreme romances Diana Dane he takes her on a tour of the Citadel Supreme and tells all of his innermost secrets just as Supreme's most hated nemesis, Darius Dax, makes a most unfortunate discovery: the key to defeat his abhorred adversary! It's most mind-blowing cliffhanger in the history of comics! Featuring a story by award winning author Alan Moore (Watchmen) and art by fan favorites Erik Larsen (Spider-Man, Savage Dragon) and Cory Hamscher (X-Men). You wish all comics were this good!
Lee: Ok, exactly what is this? Did Alan Moore just write this or was it sitting in a drawer and Larsen just decided to draw it? No matter what I am sold because Moore’s Supreme was some of the best Superman comics during it’s time. Actually, some of the best Superman stuff in a long, long time.
Thomm: I think I read maybe one issue of Supreme. For some reason it never appealed to me, even though I like Moore’s work. At this point, with so many other recent clones of Superman (The Mighty, Irredeemable, for instance), I don’t think I’m going to check this one out this late in the game. 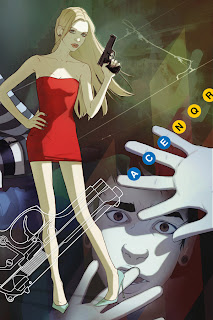 FORGETLESS: LIVE TO SEE LAST CALL TP
story Nick Spencer
art W. Scott Forbes, Jorge Coelho, Marley Zarcone
cover W. Scott Forbes
128 PAGES / FC / $14.99
The hit series from Morning Glories' Nick Spencer back in print — newly edited and with a striking new cover!  Forgetless is the biggest party in New York, but now it's ending. On the final guest list: Sara and Sonia, struggling models turned professional killers; Derrick, a failed T-shirt maker and hypnotist's assistant turned You-Tube porn impresario; and a sex-addicted koala (don't ask). Collects Forgetless #1-4
Lee: Spencer has made quite the name for himself since this was published. Do I think it will have rough edges? Yep. Do I think the art will be marginal? Yep. Am I still interested enough to get it? Yep. I always like seeing where writers started so I’ll probably check it out.
Thomm: Three different artists on a 4 issue series? That’s some turnover. It’s kinda weird to have a bit of reality in that description. Sure, there’s no such thing as models turned professional killers or sex-addicted koala, but there’s plenty of You Tube porn impresarios, or at least hopefuls. Very weird when porn’s the only real thing in a story. Almost makes the head hurt. The brain one. 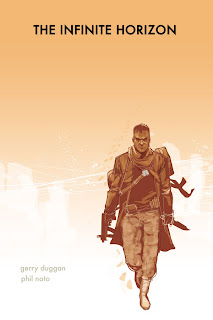 THE INFINITE HORIZON TP
by Gerry Duggan - Phil Noto
cover by Noto
184 Pages / FC / $17.99
The Eisner nominated series inspired by The Odyssey is finally completed and collected. The Soldier With No Name survived years of war only to be stranded halfway across the globe when the conflict ended. Getting home means going through the hell: Escaping shipwrecks, beating a vicious opponent wearing a cycloptic combat armor...and resisting the siren's call of a predatory society. Containing bonus material by artist Phil Noto.  Collects THE INFINITE HORIZON #1-6
Lee: Considering the first issue came out in 2007, I am pretty impressed this is finally done. They say it was Eisner nominated if you believe “them.” I wonder what this will sell like considering any momentum it might have had has most likely been killed by the 2+ yrs between issues thing. I like Noto’s work so I might check it out.
Thomm: The Odyssey’s a great story, of course. Better than the Iliad, in my opinion. But I have no way of knowing if this iteration is any good. Lee at least remembers in coming out in 2007. I don’t remember that much.
Lee:  Truth be told... I had to look it up.  I don't remember this series in the least.  That's not a good sign is it?

THE STRANGE TALENT OF LUTHER STRODE, VOL. 1 TP
story Justin Jordan
art / cover Tradd Moore
144 Pages / FC / $14.99
Luther Strode is just your average geek until he sends for an exercise course from the back of an old comic book. What he gets is the instruction manual from a murder cult as old as mankind that does everything that it promised and more.  Collects The Strange Talent Of Luther Strode # 1-6
Lee: My local store is buzzing about this so I am sold. Not that I trust my LCS all the time but this one interested me from the beginning so I have to check it out.
Thomm: Yeah, this is one to check out. I haven’t heard talk around the store but it’s looked intriguing and, hey, it made it far enough to get a trade. Not that that’s the most ringing endorsement.

BLUE ESTATE #11
story Viktor Kalvachev & Andrew Osborne
art Viktor Kalvachev, Toby Cypress & Nathan Fox
cover Viktor Kalvachev
32 Pages / FC / $2.99
"O.K. CORRAL" It's High Noon in the next to last episode of the season as Russian gangsters, Italian mobsters and not-so-innocent bystanders throw down for an all-out showdown at the blue estate. Bullets and termites fly when the critically acclaimed, 100% cool smash pulls out all the stops in the wildest blast of ultra-violence yet! (But wait! There's more…at www.BlueEstateComic.com!)
Lee: I was traveling on business this past month and stopped in a comic shop. The kid (yes kid) behind the counter and I started talking books and he actually recommended this. I love Cypress and Fox’s art, and I’m easy enough that I’ll take a recommendation from an unknown kid at the store. It’s time to get the last trade.
Thomm: Not exactly a jumping on point, here. I’ll let Lee take the dive and report back, if he survives. 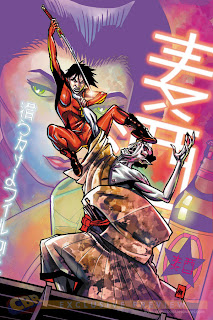 SHINKU #6
story Ron Marz
art / cover Lee Moder, Matthew Waite, Mike Atiyeh
32 Pages / FC / $2.99
"THE HIDDEN FORTRESS," Part One. Shinku's war against her vampire enemies continues! The second story arc begins with a rooftop battle between Shinku and an ancient vampire, a tale that flashes back to the feudal era of bloody, brutal samurai combat. Horror and martial-arts action meet head on!
Lee: This book symbolizes all that is good and bad about Image. Unlike most Image covers, this isn’t a t-n-a special. It’s got solid composition and bright colors that will make it stand out on the stands. I know who Marz and Moder are so the story/art should be good… but it’s 6 issues in! I want to take a chance but I am fairly certain my LCS will order *1* copy and the chances of me seeing it are close to nil. Then again, with all the Marvel books basically at $4, this one being a $1 cheaper is more than enough enticement to try it.
Thomm: Ooooh. More vampires. As good as I, Vampire is at DC and American Vampire at Vertigo, I’m about at my max for vampire stories. And I’ve managed to avoid Twilight for the most part. Saturation has been reached. Now, if you’re not done with vampires, the this might be the thing for you.
Lee:  This actually reminded me of the first Grendel arc more than anything else.  Definitely a Christine Spar feel to it.

Lee:  Yep, it's a strange month for Image.  All the regular series are in the middle of something.  I'll let you know about Blue Estate sometime in the future.
Thomm: Lee’s right. There’s a lot of stuff to join in the middle but not much starting. Trades seem like a good bet.
Posted by Lee at Friday, February 03, 2012