Indies Previews For April Part 2 of 3 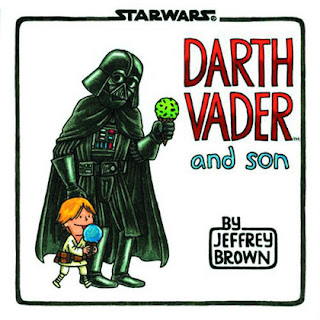 Chronicle Books
Darth Vader and Son HC by (w/a/c) Jeffrey Brown
What if Darth Vader took an active role in raising his son? What if Luke, I am your father was just a stern admonishment from an annoyed dad? In this hilarious and sweet comic reimagining, Darth Vader is a dad like any other - except with all the baggage of being the Dark Lord of the Sith. Celebrated artist Jeffrey Brown's delightful illustrations give classic Star Wars moments a fresh twist, presenting the trials and joys of parenting through the lens of a galaxy far, far away. 64 pgs, $14.95 Visit Brown here.
Lee: Jeffrey Brown is an excellent slice of life cartoonist. His autobiographical material has been outstanding. Now he is taking on some very silly stuff… and I am interested. I am up for a good roasting of Star Wars.
Thomm: Probably funny, but not exactly new ground in roasting Star Wars. Is his sister going to be in the book, too? Will it explain the sticky buns hair style? Now that’s stuff I want to know. 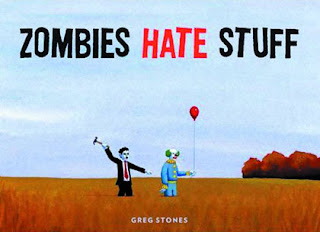 Zombies: Hate Stuff HC by (w/a/c) Greg Stones
Zombies hate clowns. They also hate hippies, not to mention zip lines, penguins, moon penguins, nudists, weddings, sharing, and kittens. They really hate unicorns, strangely don't mind Canadians, and love you. Each of Greg Stones's ghoulishly colorful paintings reveal funny and unexpected scenes of zombie disgruntlement, cataloging the stuff that really riles up the walking dead (astronauts, rain, bagpipes, re-gifting, and more) with wit, humor, and, of course, brains! 64 pgs, $9.95
Visit the artist here see preview pages here.
Lee: This really is just an art book so I doubt I will get it, but the hype is just hilarious. The cover is great too. 64 pgs of zombies juxtaposed against all things warm and fuzzy might get tedious but it’ll be fun until that point.
Thomm: I like that the zombie is using a hammer. What’s the matter with the traditional biting? 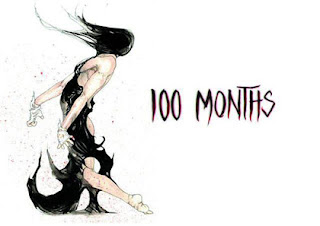 Cutting Edge Press
100 Months GN by (w/a/c) John Hicklenton
The final work of a comics visionary, this intense, hallucinatory story with artwork of breathtaking intensity is a true graphic novel, engaging ultimate themes of life, death, and salvation. The late John Hicklenton was one of Britain's leading comic book artists, famous for the brutal, visceral draughtsmanship he brought to 2000AD. His final graphic novel is a parable of environmental devastation, depicting the quest of Mara, Warrior and Earth Goddess, as she seeks revenge against the Longpig: a Satanic personification of capitalism, red in tooth and claw, whose followers, a legion of the damned, look quite a lot like us. This book was drawn and written in foreknowledge of his imminent death, and its insight into universal themes of life, death, salvation, and damnation seems to come from a place between worlds. 170 pgs $29.95 Read about Hickleton here. http://lambiek.net/artists/h/hickleton_john.htm
Lee: Have you noticed I always seem to start with the same thing? It’s always blah blah blah great art. Why stop now? THIS IS AWESOME! Hicklenton art is just amazing. And given the fact that he knew he was dying, he finished the book the day before he died, makes it all the more visceral.
Thomm: Visceral, yes. Insightful? Maybe. Imminent death doesn’t give someone any great insights on something like environmentalism or capitalism. Desperation to get your point out, sure. Much as I appreciate the effort to beat the finality of death, it’s more likely a harbinger of rushed work than bellwether of quality. 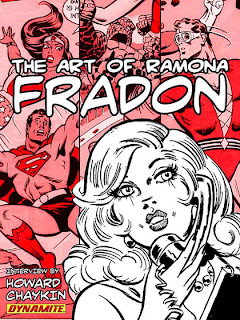 D. E./Dynamite Entertainment
Art of Ramona Fradon HC
For the first time ever! The DEFINITIVE retrospective of Ramona Fradon's career will be presented in The Art of Ramona Fradon. The Art of Ramona Fradon will be a hardcover book that highlights the magnificent career of the artistic legend, plus never-before-seen sketches. Interviewed by legendary creator Howard Chaykin, Fradon talks about her artistic career, accomplishments and creations from her the early days at DC in the 1950's to her later work on Marvel's The Cat and Fantastic Four and DC's Plastic Man, Freedom Fighters, Super Friends and more! Featuring a forward by Walt Simonson! $29.99
Lee: Fradon is one of the original greats who doesn’t get her due. A talented artist and one of the notable females to break into mainstream work. This is highly recommended for those who like the history… herstory?... of comics.
Thomm: Oh, nice uber-PC there. I’d like to read about the woman, as I like to read about a lot of the early creators, but then I’m a history buff, so kinda goes without saying. Though I said it.

Shadow #1 by (w) Garth Ennis (a) Aaron Campbell (c) Alex Ross
1938: The Shadow returns in a tale of blazing action and deadly intrigue, as a night of carnage on the New York waterfront plunges the mysterious vigilante into a conspiracy involving the fate of the world itself. As storm clouds gather across the globe, American Military Intelligence meets with a certain Lamont Cranston, determined to beat a host of spies and assassins to the greatest prize of all... but what that might be, only the Shadow knows. $3.99
Shadow: Blood & Judgment SC by (w/a/c) Howard Chaykin
Written and illustrated by legendary and award-winning comic book creator Howard Chaykin, The Shadow: Blood & Judgment is collected for the first time since 1991!!! Chaykin's dynamic, visceral style added a new dimension to The Shadow of the 1980s! The laugh had vanishedthe mocking, sinister laugh that signaled doom for the petty souls whose wrongdoing stained the world. It was gone, lost in the night that echoed it. Now, one by one, his friends and operatives are being ruthlessly murdered. Someone is trying to draw him out. Thirty-five years later, it is time for him to return. The laugh is here again. The Shadow is back. God help the guilty. $19.99

Lee: DE has certainly carved out a niche with common space properties like Zorro and the like so I guess it was only a matter of time before the Shadow showed up. I am very curious about Ennis’s version because I don’t know which Ennis I will get. The crude, over the top violence one or the good story but only a little crude one. I’m hoping for the good story one. As for the Chaykin reprint, well, it was great and cutting edge 25 yrs ago. Unfortunately it hasn’t aged well. That has to do with the fact that all the fancy, ground breaking stuff he did then is now common place.
Thomm: I wasn’t overjoyed with the Chaykin version when I read it the first time. Really, The Shadow has never caught on with me for reason’s I can’t quite discern. Combining that with my feelings about Slaughterhouse Ennis and I’ll be skipping this. 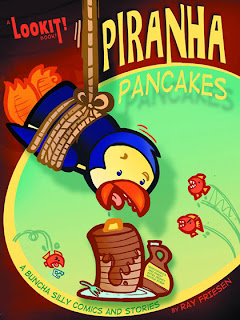 Don't Eat Any Bugs Productions
Piranha Pancakes GN by (w/a/c) Ray Friesen
Chomp! There's nothing worse than sitting down to a big pile of sugary deliciousness, and having it take a bite out of you! Or is there? This comic collection is chock-full of penguins, dinosaurs, cowboys, superheroes, and even some owls trying to take over the world (as owls so often do)! Don't worry though, their evil piranha are broken. They're really just goldfish with plastic vampire fangs. Or are they? From the creator of the smash Top Shelf hit, Pirate Penguin vs Ninja Chicken, this book is filled with Comedy and Mayhem, Adventure and Maple Syrup. Yum! $9.95
Lee: Ray is one AWESOME creator. The kids and I have read just about everything he has published and we’ll be reading this too. Full of puns and word play this is flat out fun for kids of all ages.
Thomm: This immediately reminded me of the recent spate of Cinnamon Toast Crunch commercials where they behave cannibalisticly. Every time I see those commercials it creeps me out. This is probably a lot better than that. 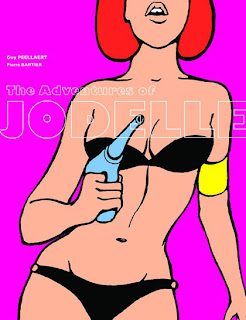 Fantagraphics Books
Adventures of Jodelle HC by (w) Pierre Bartier (a/c) Guy Peellaert
Fantagraphics proudly presents Guy Peellaert's long out of print 1960's Pop-Art masterpiece The Adventures of Jodelle in a lush, oversized hardcover edition. A satirical spy adventure set in an eye-popping psychedelic ancient Rome of horsedrawn Cadillacs, billboards and vampires, Jodelle has been re-translated and re-colored and features a huge annotated bonus selection of never-before seen archival art and photographs 80 pgs. $45.00 You can read Fantagraphics write up on the piece, with a couple of art samples, here and visit his site here.
Lee: A pop art masterpiece! If you liked Little Annie Fanny then you will like this. I think this is going to be great. And, for reference, Peellaert did the cover to Bowie’s Diamond Dogs so he knows what he’s doing.
Thomm: Little Annie Fanny! I haven’t read that in forever. Now I’m thinking this might be a good thing to get.

Fantasy Flight Publishing Inc
Rockband Manager Card Game
Bring together an epic band and rock to the top in Rockband Manager! In this card game for three to six players, take the role of band manager, assemble a group, and guide them to stardom. Use your talented stars to record killer albums, book sweet gigs, perform sold-out shows, and gain decibels to win the game. Bid for new gear and opportunities to improve your group's sound. Throw a cheap shot at your rivals by engaging in some hijinks. There are multiple roads to glory in this game, so you must develop a plan to rise above the competition. Are you ready to rock? $19.95
Lee: I don’t even know what to make of this. First there was Rock Band in which you got to play plastic instruments, now there is a card game where you get to pretend to work. Wow… I’m really at a loss on this one.
Thomm: I’ve never been a role playing fan. I played video games to a limited extent as a kid. This melding of those worlds is exceptionally weird because it’s a regressive melding into the old school paper product. Weird. 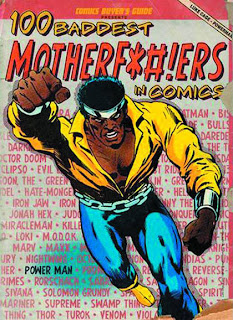 FW Media
100 Baddest Mother Fers in Comics SC
Meet the bad asses, the tough guys, the guys you don’t want to make mad. These are the guys you’d want to have backing you up in a fight. And these are the guys who make bad so much fun. From hard-bitten heroes to vile villains - including Wolverine, Batman, Luke Cage, Galactus, and more - 100 Baddest Motherf#!ers gives you the lowdown on the down low in a full-color, fully illustrated, butt-kicking format. $8.99
Lee: And we needed this book why? It’s like a bad blog post. And to clarify how bad a blog post… even we haven’t fallen so low as to have this fanboy discsussion. Maybe in private email but we would never post it on the blog.
Thomm: Didn’t you vote for Venom?
Lee: AND for the record, the whole conversation is moot because heroes are only as tough as the writer wants them to be. Spiderman defeated the entire X-men team, including Wolverine in one page once. *1* PAGE. Check out Secret Wars issue 3 if you don’t believe me.
Thomm: There’s not a chance in hell you’ll get me to open a single page of Secret Wars, even if you promise love and money (not in that order).

I hate ending on a sour note but there will be better books tomorrow.
Posted by Lee at Thursday, February 23, 2012