Jim: So once more into the breach. These used to be fun but right now absent my interest in Batman and a few other books, DC no longer owns my heart. This latest reboot changed something, a switch was thrown and we will see if it is an irreversible change or not.
Gwen: I have to agree with Jim, I have a feeling I'm not going to be as into DC cape stuff for the foreseeable future. 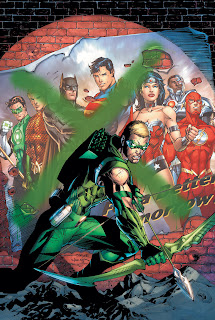 JUSTICE LEAGUE #8
Written by GEOFF JOHNS
Art by CARLOS D’ANDA
Backup story art by GARY FRANK
Cover by JIM LEE and SCOTT WILLIAMS
1:25 Variant cover by MIKE CHOI
1:200 B&W Variant cover by JIM LEE
On sale APRIL 18 • 40 pg, FC, $3.99 US • RATED T
Combo pack edition: $4.99 US
Retailers: This issue will ship with three covers. Please see the order form for more information.
In the five years that the Justice League has been a team, Green Arrow has never once been a member. And he intends to rectify that right here, right now! One member against his candidacy: Aquaman!
Plus, in "The Curse of Shazam" part 2, Billy arrives in his new foster home just as an ancient evil is uncovered halfway across the world.
This issue is also offered as a special combo pack edition, polybagged with a redemption code for a digital download of this issue.
Jim: So issue #5 of this book turned me off it pretty bad. I was getting two copies of this book and sending one to Gwen and one to Jamie, after issue six I’m only getting one copy and that is only to give the book one last shot. I agree with Matthew that the jump the shark moment was when Batman revealed his identity to Green Lantern for absolutely no reason. Add to that it was 20 pages of story and art for $4, they are doing three covers and doing the stupid digital combo packs, this book is not for the real fan, it is a marketing tool only. Finally the art is now by Carlos D’Anda, Jim Lee could not even make it for a year.
Gwen: I could care less about Green Arrow. So any JLA story about GA holds little interest for me. 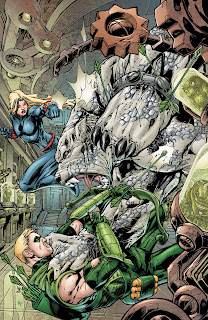 GREEN ARROW #8
Written by ANN NOCENTI
Art by HARVEY TOLIBAO
Cover by HOWARD PORTER
On sale APRIL 4 • 32 pg, FC, $2.99 US • RATED T
Part two of a three-part story introducing new creative team of Ann Nocenti and Harvey Tolibao!
Green Arrow faces off against the enraged father of three beautiful sisters, which might not seem so unusual for Ollie until you add in the part about being trapped in a frozen tundra with a horde of bloodthirsty, mutating animals. Things aren’t what they seem as Green Arrow must race to uncover the truth about this “family” before he becomes a monster snack – or a frozen corpse!
Jim: So I dropped this book a few issues back, but I picked it to make a point that DC rushed into this whole thing way too fast. We are on our third creative team already. How could you not have had a game plan mapping out the first 12 issues with plans for years 2 and 3 also being laid out? A good proposal is one that needs to be given more than a few issues to get its feet on the ground. Also if the sales sucked that much, yank the book and start another character.
Gwen: See above comment from JLA. 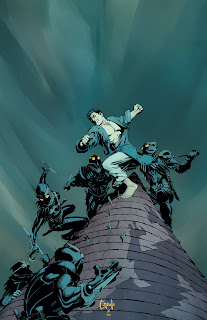 BATMAN #8
Written by SCOTT SNYDER
Backup story written by SCOTT SNYDER and JAMES TYNION IV
Art by GREG CAPULLO and JONATHAN GLAPION
Backup story art by RAFAEL ALBUQUERQUE
Cover by GREG CAPULLO
Variant cover by IAN CHURCHILL
1:200 B&W Variant cover by GREG CAPULLO
On sale APRIL 18 • 40 pg, FC, $3.99 US • RATED T
Combo pack edition: $4.99 US
Retailers: This issue will ship with three covers. Please see the order form for more information.
Broken and beaten, Bruce Wayne has retreated from Gotham City – the city of Owls – to Wayne Manor. But no place is safe, because the Court is about to strike at the heart of city, and nothing will ever be the same. Be there for the start of the battle for Gotham City’s soul…and the prelude to “The Night of the Owls.”
And in the first chapter of a new backup story, learn the secret history of The Court of Owls – as well as the secrets of Gotham City and the Wayne family!
This issue is also offered as a special combo pack edition, polybagged with a redemption code for a digital download of this issue.
Jim: Listen I love Scott Snyder’s Batman and I’m even okay with the cross over aspect of the upcoming story since I understand you don’t have to get the crossovers to get the whole story. What I’m irritated about is the hike to $4. At least we are getting more than 20 pages of story and art. By the way, DC has jumped big time into multiple covers this month. This is way too many gimmicks, especially with a book that needs none. Having said all of that this is hands down DC’s best book.
Gwen: Batman has always been one of my favorite characters and it's always great to have a writer who "gets" the character. 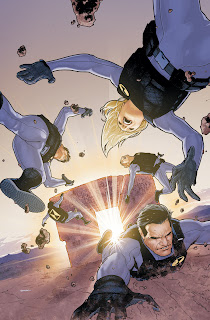 DC UNIVERSE PRESENTS #8
Written by DAN DIDIO and JERRY ORDWAY
Art by JERRY ORDWAY
Cover by RYAN SOOK
On sale APRIL 18 • 32 pg, FC, $2.99 US • RATED T
As more and more of the Challengers of the Unknown are killed in action, the remaining few must press ahead on their quest! They have to uncover the secret behind the talismans they’ve been collecting before Ace and the spirits from the Well of Souls can finish the job that started with the plane crash!
Jim: I hope this book generates some buzz. I love the Challengers, Sea Devils, Rip Hunter and the Time Masters and all those other great concepts from the sixties and before. Also with these type of concepts they actually try to update them for today and are not looked into everything being what it used to be.
Gwen: I've never cared for these characters much before but I'm always willing to give new material a shot. 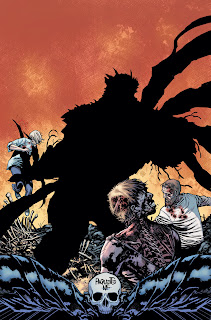 SWAMP THING #8
Written by SCOTT SNYDER
Art and cover by YANICK PAQUETTE
1:25 B&W Variant cover by YANICK PAQUETTE
On sale APRIL 4 • 32 pg, FC, $2.99 US • RATED T+
Retailers: This issue will ship with two covers. The variant cover will feature the standard edition cover in a wraparound format.
Behold the terrifying true potential of the Swamp Thing – a form so fearsome we couldn’t put it on the cover! The Green sought a warrior king, and now they have one…but will they regret unleashing a being this powerful? And can all that strength save Abigail Arcane from her destiny in the Rot’s clutches?
Jim: I’m enjoying Snyder in Swamp Thing and Lemire in Animal Man with the Green and the Red fighting against the Rot. It is like a great two great stories that are being drawn inexorably together. This is also a great example of respecting what came before and making it you own.
Gwen: I have always enjoyed Animal Man, especially when I was a kid, but I never got into Swamp Thing. Maybe now that I teach Earth Science I should pay more attention to him.
Part 2 later this week.
Posted by Jim at Wednesday, February 15, 2012