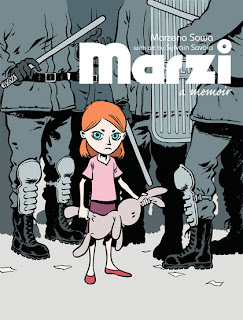 This week was I was thinking about luck.  Alot of people say they are lucky and just as many say that they aren't.  But what really defines luck?  As it happens I think I have an excellent example of luck.

I've been traveling alot for work lately so I haven't been getting as much fiber as I normally do.  Hence things are a little stickier than I would like.  I was finishing up in the reading room at the office when something lucky happened.  You see, I made a downward swiping motion when FLING - PLOP and it landed on the toilet seat.

As I looked at the plop on the seat my first thought was "Wow that was really lucky!"  You see that stuff was sticky.  If it had landed in my whitey's then they would have been stained forever.  Skid marks are one thing but big circles?  How do you explain that to the significant other?  That would have been bad.  If it landed on my pants I would never have been able to get it out and I would be washing my pants in the sink at the office.  That's really hard to explain so that would have been bad too.  But by landing on the seat it saved me from being embarrassed.  Now that is lucky.

After getting lucky, I managed to read some comics. Specifically, Marzi, Wolverine: Best there is Vol 1, and Xombi. You can see what I liked and didn't about them below the break.

If you like my Daily Life posts then you will love Marzi! This is memoir of Marzena Sowa as she grew up in Poland during the rise of Solidarity and the fall of Communism. Less about the politics and more about the reality of living a life behind the iron curtain this is just a fantastic, heart warming read. You can read my long review here. 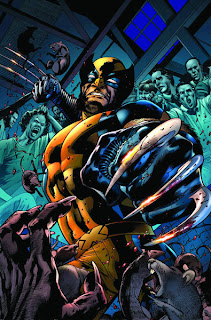 Wolverine: The Best There is- Contagion written by Charlie Huston, art by Juan Jose Ryp, published by Marvel, 144 pgs, $20

This collects the Wolverine: The Best There Is #1-6 which I believe was universally reviled. So why did I get it? Well, I loved Huston’s writing on Moon Knight and I love Ryp’s art so I took a chance. And, for the most part I liked it because it isn’t your typical Wolverine story. Which I imagine is why everyone else hated it.

The basic premise is simple, Wolverine’s enemy blackmails(?)-convinces(?) Wolverine to let him “experiment” on Wolverine’s healing factor in order to save his terminally ill son. The book then proceeds to torture Wolverine in ever more creative ways for 3.5 books, until finally Wolverine takes revenge in issue 6.

The flaws:
A minor problem is the fact that the book doesn't know what it wants to be.  It's not a max book so the violence isn't over the top.  But it is more violent, and shows more blood, than 95% of the regular books.  Also, because it's not max there aren't any curse words.  But Huston uses a ton of them which get replaced by #'s which is just ####ing stupid.  Either clean it up or go all out max but this middle of the road stuff is annoying.

The other problem is the fact that the first issue and a half really are bad. They aren’t unreadable but they are so very close. Wolverine is out of character, the plot is going no where, and a bunch of other stuff goes wrong too. Although the Wolverine as Edward ScissorHands is hilarious, those 2 pages aren't enough to save the other 30 you have to slog through.  BUT, after that point, it gets really good.

The Good:  Once the bad guy starts experimenting on Wolverine it's just excellent.  Yes, it's a little wordy but Huston puts Wolverine through some truly insane paces.  They start by shooting an explosive bullet into his eye so it gets in his skull and scrambles his brain.  Then to make sure it's really scrambled they dig the pieces out with a fork.  Yep, a fork.  Then after he heals, the record the results.  They do even more inventive stuff as the issues go along.

Huston plays upon the fact that Wolverine's healing ability has gotten out of control and is just silly now and it's a wonderful read.  Of note are the villains who also possess some degree of healing ability.  They proceed to chop each other to bits throughout the issues, heal, and do it all over again.

It's a fun read but I wouldn't pay cover price for the collection. 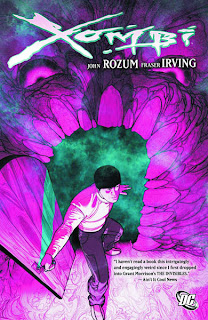 WOW OH WOW was this good. If you ever missed Grant Morrison’s Doom Patrol then this is the book for you. This is seriously whacked sh*t that is just page after page and book after book of ever increasing insanity.

Basically, David Kim is a scientist who body has been saturated with nanomachines.  Since he's now immortal and indestructible he helps people who have out of the ordinary problems.  So when the Church needs some help he accompanies Nun the Less (who can shrink), None of the Above (who is super smart and is the keeper of the holy bullets, and the other one whose name is none of our business.

Seriously, it's that insane.

Irving's art is gorgeous as always but Rozum's script is even better.  I can't recommend this enough.