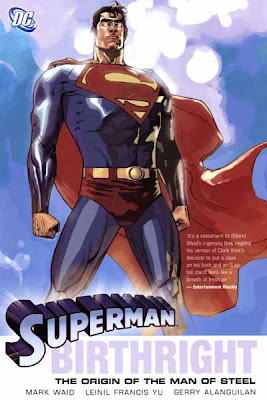 I was unpacking some boxes last weekend and in the process I dug out a copy of Superman: Birthright, Mark Waid and Leinel Yu’s origin of Superman. While it can’t be denied that the book is part of Dan Didio’s endless attempts to both retell and tweak DC’s history, it is still a very, very good comic book. In fact, comparing it stuff like Geoff Johns’ Secret Origin and Earth One only demonstrates both how good this book is and what a great handle Mark Waid has on the character of Superman.

The book’s greatest strength is that it doesn’t really spend all that much time on Superman’s actually origin. Even people who don’t read comics can recite the origin by heart and Grant Morrison showed that it can be done in four panels. So wisely, after spending a few pages with Superman’s parents saving him from Krypton’s fate, we immediately move forward to Superman as a young adult, right before he becomes a superhero.

Instead of going through the mechanics of ticking every box on the Superman history checklist (How did his parents find him? The Legion! How does he find out about Krypton?) the book is more focused on how Clark Kent’s search for identity and became recognized as the world’s premier superhero. With 12 issues to work with, Waid has quite of a bit of room to cover some ground, and does a good job in figuring out what makes Superman tick, but he wisely doesn’t do too much here. We don’t check all the boxes of Superman’s life here. The first few issues are about Superman deciding to become a superhero. The rest revolves around how he became such a trusted and beloved figure in Metropolis and around the world.

Waid’s handling of the character is exceptional. He captures what makes the character so special (as Morrison once put it “someone who will never let us down”) while making him extremely relatable, something that even writers as good as Alan Moore and Grant Morrison aren’t always capable of doing. Like so many other Superman stories, the ghost of Krypton hangs over this story, but unlike those stories, Waid wisely puts the Luthor/Superman conflict at the center of the story. Waid also realizes that Krypton’s story ended when the planet exploded. So the story becomes about how its legacy is going to live on and who is going to shape it. Which is far more interesting and has far more resonance than yet another “Oh look there is another survivor from Krypton for Superman to fight” story.

Another factor in this story’s favor is Leinil Yu. He’s become one of the premier artists in the industry now, so its easy to forget that this was his coming out party. When this book came out, I was blown away by his work. It had all the dynamism and interesting design work that he was known for, but his story telling jumped lightyears ahead of where it was with this book. Every page is bursting with energy and it feels fast and exciting, something that Superman stories don’t always have. Years later, his work on this book is still a revelation. Marvel needs to get Yu and Waid back together on a book as soon as possible.

DC’s spent the past 15 years monkeying with their history and they’ve never done as good a job with it as they did with Superman: Birthright. While this book treads on some familiar ground, it doesn’t really focus on its continuity tweaks, it focuses on a main story that we really hadn’t seen before. So it feels fresh in a way so many other Superman origin stories don’t. Sick of Superman origins stories or not, this is one of the best Superman stories you can read.
Posted by Greg at Tuesday, February 28, 2012