Imaginary Tales, right? Doesn't get much more imaginary than Bowl Subdivision football, where a "National Champion" is crowned each year without any semblance of a playoff system. 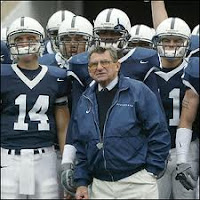 But let's talk real world. Joe Pa died on Sunday. While sad, it's made sadder for how things ended for Joe Pa at Penn State. After all, Joe Pa lived a long life and dying is going to reach all of us sooner or later. At the end of a long, happy life is about as much as we can hope. Joe Pa almost reached that, but for the last 3 months.


I hope, but don't expect, that the hoardes who called for his head, and the spineless board at Penn State, take some time to reflect on the reality of how Joe Pa was treated in the last 3 months.

Let's start up front by saying that the alleged victims of Jerry Sandusky, if they were actually victims, suffered far more than Joe Pa. But at this point, we have alleged victims. Over 7 billion humans weren't present when whatever happened between Sandusky and the alleged victims happened. Whether it was the innocent hijinx that Sandusky claims or the brutal sodomization that Commonwealth prosecutors allege is unknown to me and everyone else who wasn't there, and apparently to at least one person who was there, McQueary.

Let's also make clear that what Joe Pa was told by McQueary isn't what was told to the investigative authorities at Penn State or police authorities when they eventually were involved years later. Everyone agrees that McQueary gave Joe Pa a sanitized version of whatever it was he saw or heard that didn't go beyond saying there was something off about what he saw. Based on that minimal information, Joe Pa had McQueary talk to the proper investigative authorities at Penn State.

The legions who say that Joe Pa should have done more are a mystery to me. What should he have done? Go to the police? With what? He didn't see anything. He had second hand knowledge only. Follow up with the administration authorities? Sandusky was banned from campus. How is it Joe Pa's responsibility to find out from the administration if anything more was being done? For all he knew the administration had informed the police and no further action was going to be taken. Remember, Sandusky had been accused of inappropriate behavior once before in the '90s, which was investigated by the police with no action taken. Since when is Joe Pa supposed to have become a police authority unto himself?

Which is what kills me about all these 20/20 hindsight prognosticators. They would have looked into it more/gone to the police. I could just see and hear them now, though if Joe Pa had. "Joe Pa thinks he's so important that he's conducting his own police investigations. What kind of cult of personality is he running at Penn State?" Damned for not doing. Damned if he had.

And yet Bill Plaschke of the LA Times and a plethora of other bloviators have claimed that Joe Pa covered up what Sandusky was doing. They blather on and on that Joe Pa knew Sandusky was raping young boys and, by not arresting Sandusky himself (it would seem), was not only tacitly approving Sandusky's behavior but acting in furtherance of it. Plaschke in particular claims that Penn State had (has) a cult of personality around Joe Pa and that Joe Pa was allowing Sandusky to continue unimpeded in order to protect his legacy at Penn State.

Except, of course, for the fact that there never was a cult of personality around Joe Pa. That's not to say that people didn't admire Joe Pa. People did. People still do. It's also not to say that Joe Pa's words didn't carry authority and influence at Penn State and the wider world. But Joe Pa earned that. He didn't create a PR machine to promote himself. He didn't surround himself with sycophants. He didn't rule the decisions of Penn State's administration. He ran a football program that, for more than 40 years, churned out degree holding young men and adhered to the arcane and obfuscatory NCAA rules, no small feat in itself. If a player couldn't adhere to the rules of NCAA football, he couldn't play for Joe Pa.

So, if Joe Pa was willing to throw aside highly skilled players who would have helped his team win more games, why wouldn't Joe Pa be willing to turn over a former coach to the police, if he had first hand knowledge of criminal activity of any sort, let alone something so heinous as what's alleged against Sandusky? The idea that Joe Pa and his cult of personality prevented Penn State from "doing the right thing," which everyone seems to know quite well in hindsight, is not born out at all by the facts of both what Joe Pa knew and what Joe Pa had done throughout his career.

It's easy to get on the ex post facto bandwagon and say that Sandusky was raping boys on Penn State's campus, that Joe Pa knew about it, and that Joe Pa covered it up. It's a lot harder to prove that was the case. But that didn't stop the witch hunt for Joe Pa's job. And in the end the board of trustees at Penn State, in probably the most cowardly firing in the history of sports, fired Joe Pa.

Did Joe Pa whine about that? No. In fact, Joe Pa said that he wished there was more that he could have done. As always, Joe Pa was a man of honor and class. In a storm of CYA, he let the media and the board hang him out to dry. He took the blame for others' failings.

And now he's gone. Rest in peace, Joe Pa. You didn't deserve the flaying you received in the last three months, but you accepted it with courage and dignity. You never put yourself ahead of the alleged victims. You deserved a better last three months, but you showed the world how to weather false accusations and weak leadership, all while suffering from the disease that took your life. Courage under fire.
Posted by Thomm at Wednesday, January 25, 2012