Best of the Year 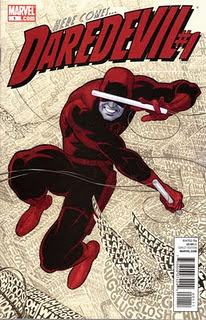 The best book of 2011 has to be Mark Waid, Paolo Rivera, and Marcos Martin's Daredevil.

While 2011 gave us a lot of great comics, I feel that this one wins out because it succeeds on so many levels.

With this new Daredevil run, Mark Waid has crafted an enormously fun superhero adventure book that seamlessly combines ongoing character development and story lines with entertaining stand alone stories. In the 7 issues so far, we have seen Daredevil fight Klaw, a thug in a luchadore mask trying to market himself to Marvel's secret criminal cabals, and cold weather. Not only is all this varied, but it is an enormous relief from the noir/crime genre that has defined this title for decades.

The past couple runs, while largely excellent, have seemed to be a competition between creative teams about who could make Matt Murdock's life the most miserable. That seemed to have run out of gas with the Shadowland crossover. Waid's more upbeat Daredevil is a welcome break from that, but even better, it uses the events of the past couple years as a foundation to build upon. Matt is trying to be more positive and carefree, because if he doesn't, he'll probably go kill himself.

This is not only a much needed change of pace, but a textbook case of how to use continuity. Waid uses what came before him to create a brilliant new status quo, but he doesn't dwell on it or revel in it. Everything in this run feels so fresh and new for a Daredevil book and it is a joy to read, but it is all made even better for a longtime Daredevil like myself by the sense that it is a logical step out of what came before. Simultaneously, it is 100% accessible to a new reader. I've said it before, but this is a perfect example of what a superhero book in the 21st century should be like.

However, this would not be the book of the year without a mention of the art. The book's two rotating pencilers, Rivera and Martin, have very distinct styles, but they are united by their incredible ability as not just tell stories, but to do innovative things with panel design. Their art doesn't just look incredible, it plays with panel structure in fascinating ways and does so in a way that emphasizes the protagonists' enhanced senses. Sound effects in particular benefit from this approach as they are used to incredible effect to enhance the story.

This is a book that is one of the best written and best looking books on the market, it has revitalized one of Marvel's most creatively storied titles, and every month does things that I've never seen before on a comic book page. No wonder Matt Murdock is smiling again.
Posted by Greg at Thursday, January 05, 2012

Email ThisBlogThis!Share to TwitterShare to FacebookShare to Pinterest
Labels: 2011 The Year in Review, Marvel