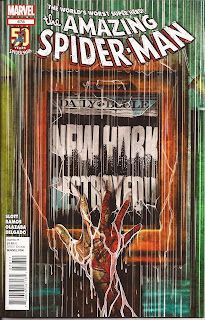 Being the second issue in the fiftieth year of the chronicles of Peter Parker, the Amazing Spider-Man.

I know. That was a weird introductory sentence, even for me. But you know what? This was a GREAT issue. And it felt momentous too, but not because it was the beginning of the next big story arc – it’s only a two-part story. Rather it was exceptional simply because it was so baggage free and accessible.

Last week I lavished some love on this title for the excellent two-part crossover: “Devil and the Details”. But let’s be honest, that worked because it was just an extension of Daredevil’s regular magnificent series. This issue on the other hand is PURE Spidey and highlights all the promising concepts of BIG TIME (Finally).

The story: Peter wakes up early (a rare thing) and walks to work (an even rarer thing) to check out the latest invention of his Horizon Lab co-worker, Grady Scraps. Grady has invented a doorway to tomorrow. To illustrate, he steps inside and comes out with the Daily Bugle for the next day. However, as soon as Peter steps through, he’s confronted with a destroyed New York City. He didn’t just visit the future, he skipped a whole day and a day without Peter Parker is a day without Spider-Man – hence the end of the Big Apple. Finding a broken watch, which indicates the time of the cataclysm, Peter asks Grady to help Spidey complete everything he was supposed to do (as written in the Bugle) to prevent the catastrophe. After getting a cryptic warning from Julia Carpenter (the new Madame Web), Peter can’t enlist the aid of any of fellow super-heroes (and teammates). By the end of the issue, he has one minute left and according to the view though the doorway, he missed completing THE task that prevents the impending disaster.

See. The story is just interesting all by itself. It’s not some rehash of an old tired storyline of another fight with an arch villain. It’s a brand new story (reminds me of the great tales John Byrne was churning out during his FF run). You could walk off the street, read this issue, never knowing anything about Spider-Man and get everything you need to know to enjoy it. In this event-exhausting era of comics, I loved this return to the old-style monthlies I grew up on.

The characters: The Horizon Lab supporting cast was introduced early on during BIG TIME, but this was the first time that I actually felt they were really supporting the story. I know that’s a bit of an overstatement, but I think this was the most face time Grady ever had. We also learn that Peter’s boss, Mr. Modell, shares similar preferences to Josiah Power. It’s hard for me to articulate this well – they were just there before, standing around as puppets to the plot. Now, they’re finally real characters with lives of their own. Peter himself was awesome. He was likable, smart (but not arrogant), heroic, funny, and free of any relationship entanglements (meaning no Carlie, MJ or Black Cat). We even got a nice cameo of his old apartment neighbor, Bambi. Madame Web was more down-to-earth too, caring for her sick daughter. Other than a brief appearance of Silver Sable and Flag Smasher, no other costumed characters even appeared in the issue.

And those are just the main players. There are numerous little character moments throughout the story, illuminated through Ramos’ brilliant style. We have Peter’s doorman, all the people on the NYC streets, etc. From body language to clothing, it was a regular “cult of personality”!

Which leads me to the other, often overlooked, essential element in Spider-Man’s world, the setting – The City of New York itself (Manhattan borough). There was Rockefeller Center, Riverside Park, and numerous other locales. Even if unnamed, they all felt very realistic. I felt like I was there (like I hope to be again in April).

The flow and pacing were great too. I relished the whole reading experience. It may not be the best comic you’ve ever read, but it’s a comic you SHOULD read and one that you are CERTAIN to enjoy. I hope this is a sign that Spider-Man’s 50th year will truly be Amazing, Spectacular, and Sensational!
GRADE A+: Possibly the BEST single issue of Amazing Spider-Man in YEARS. It’s a perfect point to jump on or just stop by for an issue or two.

Thus completes my second year of posting for Comics And... Happy Anniversary to me and a big THANK YOU to Jim and Lee for allowing me to participate in this fun endeavor!