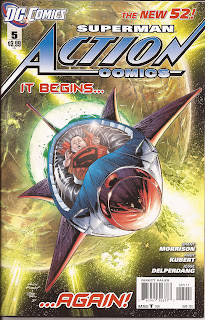 Since The New 52, Action Comics has been telling the backstory of Superman when he first started operating in Metropolis. It’s supposed to take place approximately five years ago, but that doesn’t really make since, because Justice League is also set “five years ago” and Superman has two different costumes and confidence levels. Obviously, Action precedes Justice League, but by how much who really knows (I don’t think DC has even figured it out yet). Is it six months, a year? Well, it doesn’t really matter for this issue, because now we interrupt the current arc for the backstory’s backstory – two tales of Superman’s parents (both sets). We’ve seen this played out numerous times before (even the cover loudly proclaims “AGAIN”). But, y’know what? It’s still a fascinating tale and we get some interesting new and expanded elements this time around.

Some people have complained that this book (although enjoyable) has been too normal up to now, lacking that distinct Grant Morrison feel. Well, that all ended with the first part of this issue, which caused me to work extra hard at appreciating the story. For one thing there were less words than normal, so I initially thought I could sneak in a quick read at the end of a long day. Unfortunately, words like “Mothermatician”, “Superliminal Thrust”, “Superspace” and “Un-Time”, etc. just made me give up and go to bed. So, I tried again and this time I read it aloud (softly, so the family wouldn’t think I was nuts) and it helped…A LOT! It turns out that you have to approach this more like a silent story and really focus on what’s going on in each panel (something I don’t always take time to do or in many cases don’t need to).

Krypton’s about to explode and Jor-EL and Lara try to escape into the Phantom Zone with baby Kal-EL (wrapped in his grandfather’s red cloak) and a fierce looking Krypto. At the portal with the projector set for four, Zod begins taunting Jor-EL, promising to break his wife’s mind and corrupt his son. Then impossibly Zod extends his hand outside the Zone, asking Jor-EL to take it. Well, even though Jor-EL doesn’t bite at the offer, Krypto certainly does! When Zod pulls back, Krypto hangs on, entering the portal before the surface shatters into thousands of glass shards. Jor-EL is paralyzed with indecision, but Lara reminds him of the rocket prototype and they race off toward it. And unbeknownst to them, in a little red and white blur, something escapes into the projector (four people perhaps? Krypto, Zod and his two associates?).

The two loving parents (not the cold Bryne Kryptonians) place Kal-EL into the rocket, which was originally designed for an animal test flight. On board the ship is equipped with Brainiac A.I. and Jor-EL instructs the ship to find a world with a low gravity that circles a young (yellow) sun. The ship takes off, rising above the catastrophe before rocketing out of orbit as the planet erupts in glowing green fury. Brainiac/The Rocket takes over the narration at this point and being a superior intellect starts using those Morrison words that my “Level 3” mind can barely comprehend. I think Un-Time means that Kal-EL doesn’t age on the journey like he did in Superman: The Movie.

When the ship approaches Earth’s atmosphere it constructs a protective crystalline shell of Kryptonian Sunstone before it ignites like a flaming meteor over the cold Kansas sky. Jonathan and Martha see it land while Jon is changing a flat tire. As they drive away with the baby, government helicopters can be seen hovering over the crash site. After assessing the technological level of the world (“Apes with Atom Bombs” and non-aware machines), the ship goes silent as the investigators approach. The Kents meanwhile are stopped by an army roadblock and told to detour from a “chemical spill”. But Jonathan freely admits that they saw some sort of spaceship crash and asks them to investigate his homemade “spaceman” – a deformed calf in a silver suit – in the back of his pickup. A ruse to have the government think he’s some kind of opportunistic crackpot.

Flash-forward to a previous issue, when Superman finds the rocket, which speaks to him. He tells it to protect itself and we then get some hints of the conclusion of the first arc and the dawn of the age of superhumans. Next some weird stuff happens that I’m not even going to try to explain, other than bad guys steal the Kryptonite engine of the rocket before Superman (in his Greg-loving Jim Lee costume) and the three original Legion of Super-Heroes (Saturn Girl, Cosmic Boy, and Lightning Lad) can stop them. That’s not good, because now the Earth is doomed!

It’s a familiar story with lots of new twists, which is why I went into as much detail as I did in the synopsis. And now that I’ve analyzed it several times, I can honestly say I love it! Andy Kubert’s art is beautiful and moody in this story and reading the book out loud helped me get the pacing right to be impressed by some of the epic images. I really liked the full-page splash of the rocket rising above the chaos. It was also cool how Morrison brought the story into both the current arc (Collector of Worlds) and provided a prelude to the next (likely) one as well. DC may not have their timelines all straightened out yet, but Morrison sure knows what he’s doing on this title.

So far so good, right? Well, the second story I loved even MORE!!!

While I wasn’t wowed by Sholly Fisch’s Steel story from last issue, despite the fact that I really enjoy his All-New Batman Brave and the Bold series (BEST All-Ages book of 2011), this 8-page story was EXCELLENT!!! It shows Jonathan and Martha at their wedding, optimistic about having a houseful of children. Two years later, we see them struggling with infertility. Seeking medical advice, they find out that both of them have conditions that make conception unlikely. When a year of hormone therapy doesn’t work, they talk to their pastor, who gives them some wise Biblical council, which renews their hope. The couple saves a bundle for in-vitro fertilization, but the pregnancy tragically ends in a miscarriage. Finally, they end up at an adoption agency, but it will take years to save up for the costs. Jonathan suggests they mortgage the farm to get the money, which could put his family homestead at risk. Martha is very appreciative of her husband’s willingness to sacrifice his livelihood for her while she simultaneously admonishes him to watch out for that rough spot in the road – the one that will give them a flat tire, just in time to see Kal-El fall to earth.

From someone who has a houseful of six children, it may come as a surprise that I can somewhat relate to this story, but we’ve had miscarriages too (including a blighted ovum). And while we’re content with all the children we’ve been blessed with, we’ve been leaving things open to the Lord for two years now about more and the answer has been “No”. Not a bad thing (we want God’s will), but it is mystifying from a biological standpoint, since my wife and I are only in our early 40’s. This story hits all the right emotional notes of an issue people deal with everyday. It’s quite beautiful and poignant and really shines a light on the Kent’s loving relationship (really makes me sad that they’re already dead in the current DCnU continuity).

However, I was overjoyed with the way Sholly portrayed the visit to their church. For one, it was a Baptist church – while it may not be Southern Baptist, which I attend, it could be American Baptist that my family in Kansas goes to. Not only that, but the preacher uses some great Scripture passages to help them (I Samuel 1:8 and Genesis 21) when they ask why is God punishing them (it also was cool that it didn’t appear to be that Martha was the only churchgoer). Here’s what he tells them:

“I don’t know why the two of you have had these troubles, but I do know that everything is part of God’s plan. And with two people as fine as you, I can’t imagine it’s a punishment. I’m sure it’s because, when the time is right, He has something wonderful in store for you.”

I don’t know what Sholly’s faith background is (he recently penned a great Hanukah story in Brave and the Bold), but he portrayed a Bible believing church (not just limited to Baptists) perfectly. I doubt that has EVER been done before in a comic.

ChrisCross’ art was great too and perfectly suited for this heartfelt tale.

The only blemish was a slight continuity glitch with “Rocket Song”. This story takes place right before the flat tire scene and ends on a hopeful note, but in the Morrison tale, Martha seems hopeless about their baby prospects while Jonathan’s out changing the tire. I think it was important to mention their loss to set the context of them finding Kal-EL, but it was a bit out of sync.

GRADE A+: Best issue of the series so far! An outstanding depiction of two sets of loving parents in the familiar (but never tiring) story of Superman’s rocket journey.