Covers are, and always will be, the main selling point of a comic.  If the cover stinks then there is very little chance you will buy the book.  But, covers have changed over time.  For example, in the 70's Marvel cluttered their covers up with word balloons.  These days, not so much.  But I've always kinda liked words on covers.  Sometimes those words make you really want to see what's on the inside.

Let's just say romance covers were always the best!  And here's why... 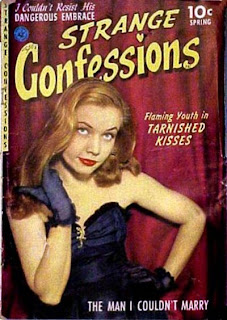 Strange Confessions #1, January-March 1952
on the cover...
"I Couldn't Resist His Dangerous Embrace"
"Flaming Youth in Tarnished Kisses"
"The Man I Couldn't Marry"

You can't deny you are intrigued by a story called "Flaming Youth in Tarnished Kisses"!

But, Strange Confessions was only getting started!  See more below. 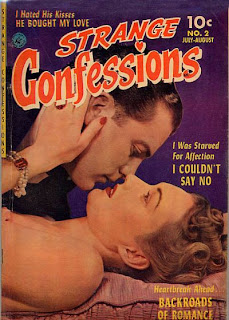 Strange Confessions #2
"I Hated His Kisses, He Bought My Love"
"I Was Starved for Affection, I Couldn't Say No"
"Heartbreak Ahead, Backroads of Romance" 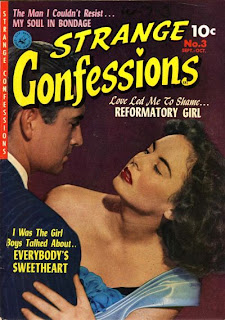 Strange Confessions #3
"The Man I Couldn't Resist... My Soul In Bondage"
"Love Led Me to Shame... Reformatory Girl"
"I Was The Girl Boys Talked About... Everybody's Sweetheart"

Ummm... "My Soul In Bondage"???  Really?  Whoever was writing this was obviously having fun. 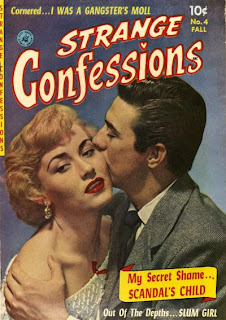 If I could find these cheap I would so get this. 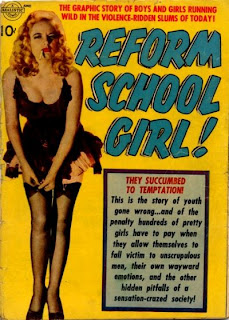 But the best cover ever is still...


Reform School Girl, 1951
"This is the story of youth gone wrong... and of the penalty hundreds of pretty girls have to when they allow themselves to fall victim to unscrupulous men, their own wayward emotions, and the other hidden pitfalls of a sensation-crazed society"

If the writers thought it was a sensation crazed society in 1951, I wonder what they would say about today?

And, for those wondering, I've actually read this... and yes it is as unintentionally funny as it appears to be.