Indies Previews for December Part 3 of 3 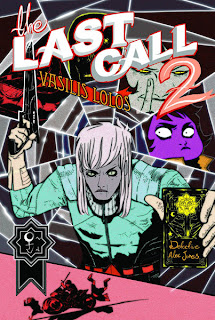 Oni Press Inc.
Last Call Vol. 02 GN by (w/a/c) Vasilis Lolos
The Ghost Train is the unearthly engine that travels between dimensions and through the void of space and time. When two normal teenagers, Alec and Sam, mysteriously end up on the train, they're thrown into a world unlike any they've ever seen and in the middle of a killing spree more chilling than anything they could have imagined! After being separated in Volume 1, the pair finally find one another, but it's not the reunion either one expects. Alec has aged ten years while Sam has only been on his own for ten hours! There's no time for the two to catch up though! There's still the issue of who is murdering the passengers and how it's connected to the boy's appearance on the train! 160 pgs, 5x7, B-W, $12.99
Lee: Well, let's see, Vol 1 was published in 2007 so it’s ok if you don’t remember the story. But, since by accident I found my copy the other day I can tell you that this was very, very good. It had both excellent story and art. It's well worth reading and I am ordering this... I just hope it's less than 5 yrs before the next book.  Or I hope there's a conclusion.
Thomm: A good premise and a good looking book. Of course, I’ll have to track down the first volume if I’m going to get this one. 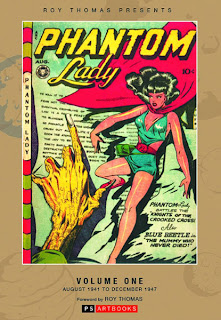 PS Artbooks
Phantom Lady Collected Works Vol. 01 HC by (a) Matt Baker
Phantom Lady, one of the legendary characters of Quality Comics, returns in this collected edition, limited to just 1700 copies worldwide! Reprinting Phantom Lady stories from Police Comic #1-23 and Phantom Lady #13-15, this full-color hardcover is limited to just 1,700 copies worldwide. 288 pgs, FC, $47.99
Lee: The man who set the standard for good girl art finally gets his due. The reviews are mixed on the quality of the reproduction but this is still worth the money.
Thomm: I think it’s limited to just 1700 copies. Not sure, though, because they only mentioned it twice. Considering this is a purchase for the art, I’d want the quality of the reproduction to be top notch before sinking $50 into it. 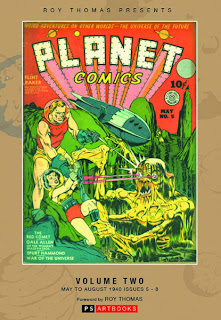 Fiction House Collected Works Planet Comics Vol. 02 HC
The second volume of the groundbreaking awe-filled Planet Comics that appeared from Fiction House over a thirteen-year period ending in 1953. They're all here - Flint Baker, Reef Ryan, The Space Rangers, Gale Allen, Star Pirate, Mysta of the Moon, Norge Benson, plus many more and a bevy of the most scantily-clad females you're likely to see outside of Silvio Dante's Bada Bing strip joint in The Sopranos. Collects issues #5-8, May 1940 to August 1940. 288 pgs, $47.99
Lee: This is for the hard core comic fan. It's one of the great comics of the Golden Age but it's GA material. The art will be both good and bad… and the stories. Well they’re GA stories.  It's fun if you have extra money.  Lots of it.
Thomm: That blurb’s really reaching, bringing in a mention of the Sopranos. Somehow I don’t think that alone’s going to bring in the contemporary comics reader. Love the cover, though. 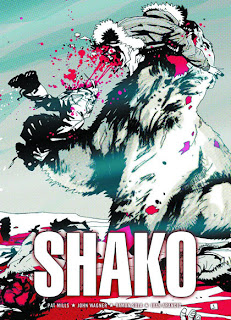 Rebellion / 2000AD
Shako GN by (w) John Wagner (a/c) Ramon Sola
Shako: the Eskimo word for polar bear. When a US Air Force plane crashes within the Arctic Circle, Shako, the terror of the frozen wastes, is the first on the scene, getting his first taste of human flesh. Unfortunately for the CIA, the great white beast has also swallowed a top-secret capsule which was being transported aboard the plane - and now the CIA must track him down to retrieve it! But this won't be an easy task, for what Shako hates Shako destroys! 96 pgs, B-W, $17.99
Lee: This is a collection of some very early 2000AD material. It’s dated as the good guys fight a polar bear and Russians but it still holds up pretty well. Interesting if you like older British comics but not necessary.
Thomm: I know I’ve mentioned it before somewhere, but bears don’t have thumbs, so the cover is impossible. Just sayin’. Beyond that I don’t find the premise all that thrilling. Tracking a polar bear’s not that hard, especially when he has your high tech maguffin in him. 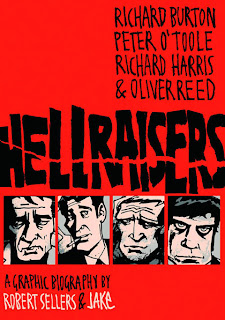 Selfmadehero
Hellraiser's Graphic Biographies GN by (w) Robert Sellars (a/c) "Jake,"
Raise a glass to the story of four of the greatest actors-and boozers-of all time: Richard Burton, Richard Harris, Peter O'Toole, and Oliver Reed. This inventive graphic work seamlessly weaves their four biographies into one fast-paced adventure of drunken binges, orgies, parties, and fun. The story begins at a London pub one sorry Christmas and is told through the eyes of Martin, a wannabe hellraiser sitting at the end of the bar alone, drinking himself into oblivion. He's joined in turn by Burton, Harris, Reed, and O'Toole, who take Martin on tours of their tumultuous childhoods, rises to stardom, and chaotic personal lives. 160 pgs, 7x10, B-W, $22.95
Thomm: They’re not kidding. T hose four were notorious. I don’t think 160 pages could capture even a fraction of their escapades, but I’ll venture it’s highly entertaining and utterly without redeeming value. The art looks very good, too.
Lee:  I know nothing about these guys but I knew Thomm would.  It's hard to be the story of real life party animals. 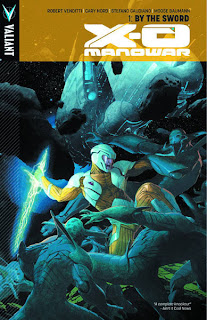 Valiant Entertainment LLC
X-O Manowar Vol. 01: By the Sword SC by (w) Robert Venditti (a) Cary Nord (C) Esad Ribic
The beginning of the all-new Valiant Universe starts here! Aric of Dacia is a brash warrior and heir to the throne of the Visigoth people. He has lived his life under the heel of the Roman Empire, but now a far more terrible enemy has come to subjugate him. Taken from his home and family, Aric is enslaved aboard a starship belonging to a brutal race of alien colonizers known as The Vine. If he is to have any hope of escaping and returning to Earth, he will have to steal the Vine's most powerful weapon – a sentient suit of indestructible armor - and become X-O Manowar! This volume collects the first four issues of the acclaimed, breakout series by New York Times-best-selling author Robert Venditti (The Surrogates, The Homeland Directive) and Eisner Award-winning artist Cary Nord (Conan)! 112 pgs, FC, 7x10, $9.99
Lee: Of all the new valiant titles I would say this is the weakest.Still worth getting but kinda slow. It’s still good but Harbinger is better. And Bloodshot is growing into a solid title too.
Thomm: Coincidentally, I was just watching a show about the Romans’ conflict with the Dacians earlier this week. I haven’t read any of the Valiant books but this one has an intriguing premise. For $10 I’d take a look at it.