The Underwater Welder by Jeff Lemire – A Review 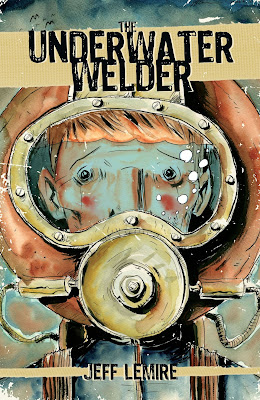 This book was an absolutely fantastic read and a great story.

Jeff Lemire is a master story teller. From Essex County, to Sweet Tooth, with stops at Animal Man and Justice League Dark Jeff has become one of DC’s biggest stars. He has earned it as he knows how to write. In the midst of Sweet Tooth and the DCU new 52 he also managed to complete The Underwater Welder and it is published via Top Shelf Productions.

The Underwater Welder is both drawn and written by Jeff and in 200 plus pages Jeff tells a story that is a character study of Jack, who is (surprise) an underwater welder. The story has unbelievable emotional depth (pun intended) to it. It deals with Jack’s relationships with his long dead father, his very pregnant wife and his Mother.

While diving Jack starts to see things and a doctor tells him to take time off, which thrills his wife as she is due in the next month. Of course that means anytime at all as my daughter Gwen can attest to with my new grandson Henry 2 plus week early arrival. Jack can’t shake the feeling that there is more to it than that and he believes his visions have meaning. As Jack explores this we find out Jack was well educated and did not have to return to this small town and be a diver. His Dad was a diver, but he dove to find objects and then sold them in his pawn shop. His Dad and Mother were estranged and Jack only spent one day a week with his Dad. He loved his father but his father keeps disappointing him and his mother with his drinking and his lack of responsibility. Still you knew that he loved his son and cared about him.

The story then opens up with Jack and his wife arguing about Jack’s remoteness and how he appears to be pulling away from the family. Jack goes off and does another dive to find out what he saw and this time he comes back to an empty ghost town and confronts his past. It has a Twilight Zone feel to it when Jack returns to an empty town.

I don’t want to do a detailed plot summary, suffice to say the emotional content of the story rings true and you find yourself hoping Jack gets home and figures it all out.

Jeff Lemire is a brilliant story teller. His art is deceptively simple looking, but the emotion that comes out of his art is nothing short of extraordinary. On top of that the way he designs and structures the look of the book makes it a great read. One final point is Jeff has the story transition from adult Jack to young Jack many times and it is a great story telling tool.

Art and story go hand in hand and Jeff has written what maybe one of his best stories ever and he has some great ones on his resume already. I loved the little homage to Sweet Tooth that he snuck into the book.
The Underwater Welder is a book you should read, it is graphic story telling at its finest and a creator at the pinnacle of his ability.
Posted by Jim at Wednesday, October 31, 2012