With a huge focus on the big two I often forget how many different publishers are out there and most of them have some good series. 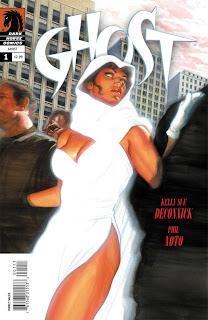 Dark Horse has Ghost #1 by Kelly Sue DeConnick and Phil Noto. Since I have not re-read the old Ghost series I have no clue if she is building off the original concept or if this is a total reimagining of the old series. Kelly has done a terrific job in setting up the premise. Even without reading the zero issue this first issue tells you everything you need to know about the book. Ghost is a woman who has been brought into this world by two guys who stumbled into some stolen technology and accidently activated it. Now they are on the run with her as they try and determine who she is, where did she come from and just what the heck is going on. We are also given some additional back story about what maybe her origin and it appears to involve the devil. The two guys who are on the road with Ghost are going to be in way over their heads. Noto’s art is certainly up to the task and does a good job with the book. He is not a good girl artist, but he can draw a pretty girl and does fantastic work with expressions. I have not read a lot by Ms. DeConnick and this is the first series where I have been very impressed. In one issue she sets the premise, gives us a decent size cast and advances the plot. Very few writers can pack in so much without crippling the flow of the story. This was a very promising start.

Image brings Invincible #96 by Robert Kirkman, Ryan Ottley and Cory Walker. The main story has been about Robot and Monster Girl with Mark Grayson and the new Invincible being supporting players. You might think that would hurt the book, but it didn’t. The story about Robot and Monster Girl was great with so many twists; gender bending, betrayal and surprises that I almost forget about the title character. Not only do we get a wrap up of that story, but we get some cool surprises with Invincible’s parents learning about his super heroics and we see Mark trying to come to terms with being normal and not succeeding particular well.  Kirkman has this series set to build to issue #100 and beyond. One of the best things is that you know we are not going to just get some re-set of the character, what happens matters.

IDW has Cobra # 18 by Mike Costa and Antonio Fuso. Since the book has gone back to being about covert ops it has been a lot of fun. I still think the sparse artwork by Fuso is the weak point of the book. Don’t get me wrong, it conveys the story and does all the basics, but it is the story itself that drives the book. The introduction of a Russian group that is GI Joes’ opposite number and also fighting Cobra was a nice addition. This is just a well done series and I’m no fan of the GI Joe stuff, but I’m a fan of this book.

Dynamite has the Shadow #6 by Garth Ennis and Aaron Campbell. The good news is the first arc of this book was just incredible. The Shadow is every inch the manipulative mysterious hero that plays by his own rules. Campbell’s artwork is very good and Ennis’ story got better and better the deeper we got into the arc. In fact this book will read better as a trade. The bad news is that next issue brings us a whole new creative team. Hopefully it will build on what has come before and keep the Shadow in the late 30’s where I feel he works best.

DC via its Vertigo label brings us Fables #122 by Bill Willingham and Gene Ha. This issue we get part 1 of a two part story about Bigby Wolf from times past. In this story Bigby is always the wolf and not nearly as sophisticated as he is today. Willingham has a great touch with this material and while it was built on the Fables it feels like that Willingham has made it all his own. Gene Ha’s art looks great as always. It is nice that a series on its 122 issue is still as strong and well done as it has ever been.

Marvel’s entry is Punisher War Zone #1 (of 5) by Greg Rucka and Carmine Di Giandomenico. The book is an extension of the Punisher series that ended last month. I’m not sure of what the point was to launch this ending of the series as a separate mini-series, except as a sales gimmick. Frank runs into Spider-Man and Spider-Man goes after Frank and gets beaten by him. Spider-Man enlists the Avengers in capturing Frank once and for all. The reactions of the Avengers into being recruited to fight the Punisher were interesting and then Wolverine going behind their back to warn Frank was even better. The Punisher vs the Avengers is pretty much a damn hard concept to make work even in with the suspension of disbelief one brings into a comic book setting, but Rucka should be able to pull it off.

Quality stories and qualities series are the function of the writer, artist and character. Put the right mix together and you can generate an entertaining series. It is not publisher specific per se, but obviously with certain characters it can only be from one publisher. Find that right mix and it doesn't matter who publishes the book, it will be good and possible great. These six series are all at the very least good.