After a 2 year, 4 month run, iZombie reached its end.  Wisely, this appears to have been a planned end, telling one coherent story with a well developed cast and a complete beginning, middle and end.  Then again, it's not a superhero tale, so there's a better chance of that sort of cogent story telling.

For those not in the know, iZombie was created by Chris Roberson and Michael Allred, with Roberson doing all the writing and Allred doing most of the art.  There were guest art issues by Gilbert Hernandez (issue 12), Jay Stephens (issue 18), J. Bone (issue 21), and Jim Rugg (issue 24).  I've enjoyed Allred's Pop Art style for a little while now, and this series didn't disappoint.  Great lines.  Great work on facial expressions.  Just a hint of comedy in a horror/mystery story.  And Laura Allred's colors on all 28 issues was spot on for the art.  She uses a palette the evokes a sunny disposition, which makes an interesting contrast to the story.  There's no losing anything drawn here in dark inks, though.  And that's good.  Too common a thing in horror tales is having a muddled, dark mess.

On to the story.  Gwen Dylan is our heroine.  She's a zombie.  A zombie who still posses her mental faculties, though her memory has some gaps so far as her life before she died.  When the book starts it looks like it's going to be a mystery/detective book.  Gwen eats the brains of the recently deceased because it helps keep her from losing her own memories.  Aside from the horrible taste, the eating of brains causes her to be subject to the memories of the deceased, who often want her to do something to resolve something left hanging before dying.  The first guy's mystery is who killed him, but it soon becomes more relevant that he was a killer in his own right. 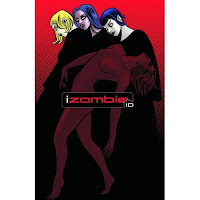 Soon, though, Roberson and Allred go all in for horror story and there are no more mystery solution stories after the first year of the book.  Gwen, her ghost friend Ellie, and were-terrier friend Scott (Spot) go from being the Scooby gang to preventing the end of the world.  Along the way Gwen falls for Horatio, who's a Fossor (monster hunters), Spot falls for Gavin (Gwen's brother), and Ellie falls for Francisco (a reassembled corpse).  There are vampires, brainless zombies, poltergeists, a mummy, a bride of Frankenstein, and a few unexplained things, too.  And those are the monsters who can go either way as good guys or bad guys.  Oh, and a dead grandfather whose soul inhabits a chimp, ironically, as it turns out.

Souls are the modus operandi of the books theology.  Amon, a mummy, lays it out to Gwen early on in the book.  There are over souls and under souls.  Ghosts are over souls without a body.  Poltergeists are under souls without a body.  Brainless zombies are under souls with a body.  Vampires are over souls in a body.  Were-creatures are the soul of a dead animal trying to inhabit a human.  The grampa chimp is an oversoul and undersoul inhabiting a chimp, I  think.  That crept up later without explanation.  It's a very interesting proposition and cosmology that Roberson and Allred created to explain the various beings in the book.

The big bad is Xitalu, a force from outside time and space that travels from planet to planet, draining all life.  Amon has defeated him on a few other occasions, the most recent time being during the Conquistador era.  When she was alive, he met Gwen and eventually convinced her to kill herself so she could come back as an intelligent zombie, a revenant.  Once she came back he was to train her to fight Xitalu.

Several things go wrong with the plan.  For one, Gwen doesn't remember it.  When she comes back she just goes about unliving, working as a gravedigger and living in a tomb with Ellie to keep her company.  For another, Xitalu's coming back a lot sooner than Amon had thought.  There ends up a rush for Amon to convince Gwen of the need for her training and then the training itself.

All this takes place in Eugene, OR, which is a nice change of locale.  I can't think of another story I've read set there.  The University of Oregon is a prominent player, too, and the track team even makes an appearance.  Spectral attacks at the Prefontaine Classic (it doesn't say it's the classic, but I'm going to pretend it is) are not something I've seen at the annual event.  Might make for some record times for those trying to escape.

Three of the four issues where Allred isn't the artist features a back story on one of the characters.  In issue 12 it's Ellie.  Issue 18 is Diogenes (another Fossor).  Kennedy (a zombie/cyborg Dead President, agents of the US government under the command of zombie Abraham Lincoln) is examined in issue 24.  Only issue 21 by J. Bone is a standard issue story of what's going on with Gwen and the gangs' travails.

There's a lot of pop culture touched on, from the Cold War remenants to the plight of voice over artists.  It's a broad scope of culture related through a well developed cast of characters.  Even a group of vampire girls running a paint ball facility to lure in young men for some judicious blood sucking is fleshed out so that there are memorable moments and significant events to move the story in important directions.

It's something of a maudlin end for Gwen.  Not quite happy, not quite sad.  Xitalu is defeated with finality, so it's a happy ending for the Earth and its residents.

My only quibble with the story that it seemed to me that the method Gwen used to defeat Xitalu could have been easily discovered by Amon and utilized centuries ago.  Perhaps he did know it and chose not to because he wasn't willing to make the sacrifice Gwen made.  I suppose I'm taking what Amon says at too much of its surface value, as he proclaimed that his plan was the only way to defeat Xitalu, but he had been shown to be less than candid about other things previously.

In any case, it's well worth buying, whether in singles, trades or, someday, HC.
Posted by Thomm at Thursday, October 18, 2012