Indies Previews for December Part 2 of 3 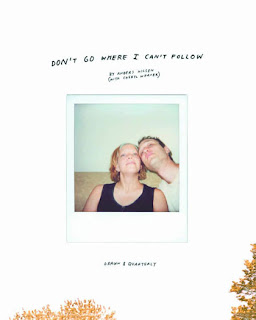 Drawn And Quarterly Don't Go Where I Can't Follow HC by (w/a/c) Anders Nilsen
In this collection of letters, drawings, and photos, Anders Nilsen chronicles a six-year relationship and the illness that brought it to an end. Don't Go Where I Can't Follow is an eloquent appreciation of the time the author shared with his fiancée, Cheryl Weaver. The story is told using artifacts of the couple's life together, including early love notes, simple and poetic postcards, tales of their travels in written and comics form, journal entries, and drawings done in the hospital in her final days. Don't Go Where I Can't Follow is a deeply personal romance, and a universal reminder of our mortality and the significance of the relationships we build. 96 pgs, FC, 6x10, $19.95
Lee: And I dub this the months best depression fest.  I think it's great that Nilsen did this but I can't help but feel it's gonna be sad.  It's worth checking out if you like real life stuff.
Thomm: Depression is obviously a central element to this book. Can Nilsen make it more than just a tear-jerker? I would hope so, but I don’t know enough about him or his work to say.

5 more below the break.  Many of which are happier than the last book! 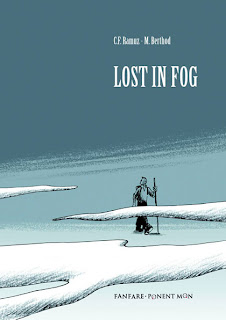 Fanfare / Ponent Mon
Lost in Fog GN by (w) C.F. Ramuz (a/c) M. Berthod
Ramuz is a giant of both Swiss and French literature. His face appears on the 200 Swiss Franc note and he also wrote the libretto for Stravinksy's A Soldier's Story. Matthieu Berthod was snowbound in his family's chalet in the Swiss Alps and began reading some of the books in his grandfather's library. From these adverse conditions came this delightful collection of adapted stories in a fierce woodcup style. 80 pgs, B-W, 7x10, $18.95 Preview images here.
Thomm: It’s a bit pricey for the page count. On the plus side, it looks good and has a solid literary basis. I might take a flyer on it down the road.Lee: I'm not really sure who Ramuz is but, like Thomm, I am a sucker for a solid literary story.  The art looks really nice too. 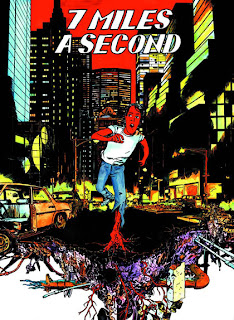 Fantagraphics Books
7 Miles a Second HC by (w) David Wojnarowicz (a/c) James Romberger
Originally published as a comic book in 1996 by DC's Vertigo Comics, 7 Miles a Second was an instant critical success and has become a cult classic amongst fans of literary and art comics. Now fully restored and expanded, 7 Miles a Second blends the gritty naturalism of Lower East Side street life with hallucinatory, psychedelic images that takes perfect advantage of the comics medium. 68 pgs, FC, 9 x 11.75, $19.99
Thomm: Oh, wait, we talked about this amongst ourselves recently. I think the emphasis is on psychedelic. If that’s your cup of tea (or tea with some added ingredients) then jump right in. Another one that’s a bit pricey, though.Lee: Actually, we starting talking about this because '96 was some of my peak buying.  Because of that I was surprised that I didn't recognize a Vertigo title.  Turns out this is the autobiographical story of a former male prostitute (Romberger) who manages to escape that life and becomes a celebrated artist.  Unfortunately he also catches AIDS.  I believe this was one of the first comics associated with aids but I could be wrong. 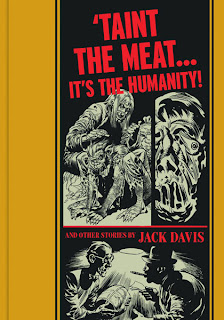 EC Jack Davis: Taint The Meat... It's The Humanity! and Other Stories HC by (w/a/c) Jack Davis
Fantagraphics is presenting classic EC material in reader friendly, artist-and-genre-centric packages and 'Taint the Meat... collects every one of Jack Davis' 24 Tales From The Crypt stories in one convenient, goredrenched package for the first time. 'Taint the Meat will also include extensive story notes by the acclaimed painter and cartoonist William Stout. 240 pgs, B-W, 7x10, $28.99
Lee: Not alot to say here other than it's a book full of classic reprints.  Davis's art is just stunning so it's worth it for that reason alone.
Thomm: If you’re into the classic horror, this is a good way to collect a single creator’s entire work. Lots and lots of pages for your money and some good, old-timey scary. 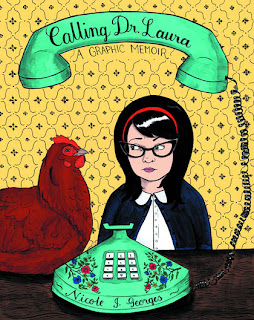 Mariner Books
Calling Dr. Laura Graphic Memoir GN by (w/a/c) Nicole J. Georges
When Nicole was two years old, her mother told her that her father was dead. When she was 23, a psychic told her he was alive. Her half-sister admits that the psychic is right and that the whole family has conspired to keep him a secret. Sent into a tailspin about her identity, Nicole turns to radio talk-show host Dr. Laura Schlessinger for advice. Calling Dr. Laura tells the story of what happens to you when you are raised in a family of secrets, and what happens to your brain (and heart) when you learn the truth from an unlikely source. 288 pgs, B-W, 7x10, $16.95
Thomm: Man, you’re some kind of damaged if you’re looking to Dr Laura for advice. This is why we need universal healthcare, so people get actual care instead of entertain-o-care. The book sounds very interesting, as damaged people often are.Lee: Without a doubt this will be entertaining.  Who thinks calling Dr. Laura is ever a good idea? 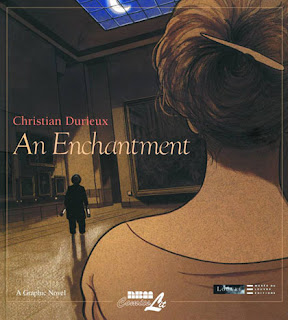 NBM
Louvre Collection: An Enchantment HC by (w/a/c) Christian Durieux
Those two, they never should have met. In the night, in a long corridor pinned with ancient dreams, they make of this encounter a party. Those two, they must have a gift. The next remarkable graphic novel in the Louvre collection tells the tale of the retiring museum director on a fugue from his retirement dinner through the vast halls of the museum, eloping with a muse. 72 pgs, FC, 10.5x11, $19.99  Preview image here.
Lee: These have been great books. Excellent comic art with images of painted masterpieces all over the place. Great way to expose the kids to art.
Thomm: Now that’s a teaser blurb. It’s nearly poetic and nearly makes no sense, but in an entertaining way. Lots and lots of good art to see, too.

The last bit tomorrow
Posted by Lee at Thursday, October 25, 2012