What I’m Getting October 10 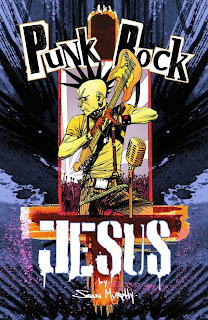 Crap, I’m starting to see a creep back upward in the number of books I’m getting. It is a constant battle for me to keep the list down. I have an attention span that needs to be measured in nanoseconds at times. I want to read everything, but having to earn a living and having other interests creates a time problem. The “Death of a Family” bat cross-over has me buying some extra books and the last run of Bendis on Avengers and Marvel Now has caused me to also add some books. Plus the independent publishers are always adding some title that I want to try our. Maybe next week and week 5 will be smaller. If you want to see everything coming out next week just click on October 10 books. This week I linked to Midtown Comics. I love and have my books shipped from Cosmic Comix, but Midtown’s listing gives you a lot more information on each title. 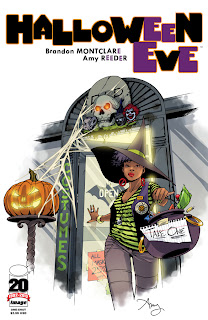 The first few books that scream at me are Punk Rock Jesus #4 (of 6), Uncanny Avengers #1, Halloween Eve One Shot, Stumptown #2 and Stuff of Legend Toy Collector #1 (of 5). Punk Rock has been excellent. Sean Murphy is packing more story per page then anyone else right now with a wonderful picture of a crazed future where a clone of Jesus is our central character. Uncanny Avengers is Rick Remender being given the Captain’s chair at Marvel. I mean the guy has been knocking us dead with his dark pictures in Fear Agent, Frankencastle, Uncanny X-Force and Secret Avengers, let’s see how he does with being the new Marvel super star writer. Halloween Eve is not even a book I’m buying as I backed the Kickstarter project that got the book published, so I get one mailed to me. The art is by Amy Reeder and that is enough for me. Here is a link about the book. Stumptown was gone too long and I’m thrilled to have this series back again. Issue #1 was great; who knew finding a guitar could be so much trouble. Finally Stuff of Legend is a series of mini-series about a dark world of lost toys and a captured boy. I originally thought this would be a completed story in one mini-series, but now I don’t care how long it goes on. The art by C. Paul Wilson is great and the story is equal to the art.

Then there are the books I allow myself to be sucked into for no rational reason like Batgirl #13 (a prelude to Death in the Family), Avengers #31 (starting the last arc by Bendis on Avengers). AvX Consequences #1 (of 5) (the main one being it cost me $48 retail to read all 12 issues), Haunted Horror #1 (which is a reprint of some old comic stories from the fifties) and Damsels #2 (I haven’t had a chance to read #1 yet). Haunted Horror may work out because I have a lot of that material but may read more of it in this format. The Death in the Family cross-over is about the Joker making his first appearance in the new DCU, but a prelude is often not related at all. This is one disadvantage of not being able to decide at the store while perusing the books.

Dark Horse has a good week with The Creep #2, Massive #5 and Conan The Barbarian #9. I hope Conan has a new artist as the last issue was poor art for my taste. Sadly I believe the artist has one last issue for the arc. The Creep has already been a great private eye series. I think John Arcudi is an underrated writer. He has written some great books chief among them the graphic novel “A God Somewhere”. Heck he did Major Bummer; some great JLA stories (Super Power, Destiny) and is the co-writer for much of the Mignolaverse books. Since Mike Mignola’s name is on all the books I think the strength of Arcudi’s contributions is often overlooked. Anyway read The Creep.

Image and Valiant bring us Hoax Hunters #4, Point of Impact #1 (of 4), Think Tank #3, Archer and Armstrong #3 and Bloodshoot #4. Point of Impact looks to be very, very good. Jay Faerber has done a lot of good work (Dynamo 5, Near Death) but has yet to hit it big. Heck most of the artists who work with him seem to be gobbled up by DC. Point of Impact could change that as the premise sounds great: A gripping, provocative four-part crime series from acclaimed writer JAY FAERBER and stunning new artist KORAY KURANEL begins with one woman's murder and branches out to follow the investigation by three people with personal connections to her: her husband, an investigative reporter; her lover, an ex-soldier; and her friend, a homicide detective. Her death will change all of their lives. Check out the preview here, it just feels like it could be a great story.

The Marvel stuff is Red She Hulk #58, Secret Avengers #32, X-Men #37 and Marvel Masterworks Sgt. Fury Volume 4 (Variant #187). I actually want to see Sgt. Fury much deeper into its run when John Serverin was inking over Dick Ayers. It was Dick’s layouts, but was 100% Severin’s style. It added so much to the book and the book got grittier. Stan Lee wrote it like a super hero book. Once other writers took it over it was better. Red She Hulk is labeled a Marvel Now book, which is a cheat in my mind, but it goes to my point on why isn’t this new series. Secret Avengers is another Rick Remender book which I believe ends when his story ends.

The rest is everything else from DC which is Batman #13, Batman and Robin #13, Before Watchmen Dr. Manhattan #2 (of 4),  Demon Knights #13, Frankenstein Agent of Shade #13, Green Lantern Corps #13, Phantom Stranger #1, Suicide Squad #13 and Team 7 #1. The zero month I’m sure was a great sales gimmick, but it really knocked the flow of many of these books. Batman is setting up for “Death of the Family” and Snyder’s work is always a good read. Before Watchmen Dr. Manhattan was a little disappointing in issue #1 as Adam Hughes work felt rather less then what he brings to covers. The story by JMS is playing with Manhattan being able to manipulate his history, which is time travel and that always gets convoluted. Demon Knights is on the edge of being canned, we will see with this issue. Heck Phantom Stranger is already late one week and that does not bode well, but since Didio is forcing himself into the mix, who can tell him no. Plus they plan to have “important” reveals in this series; I’m already planning to drop this book. I smile every time a new Frankenstein book hits the stands because Matt Kindt is writing it. I enjoy seeing DC use some great indy type talent.

Damn I got a little wordy this week. That’s what I’m getting; did I miss a great book coming out?