Jim: A bit of news, my daughter Gwen used to do these with me, but work and real life has taken her away from being able to do anything with the blog for awhile. One of those “things” was the birth of her and her husband’s son on October 7. So I now have the task of making sure Henry is a comic book fan also.
Lee:  Stepping up to take Gwen's place is... none other than... drum roll please... me!  I haven't done DC in a long, long time so this will be interesting.
Onto the DC preview review. One important question how long does it get to be the “New 52”? Is that still going to be the cover blurb forever? 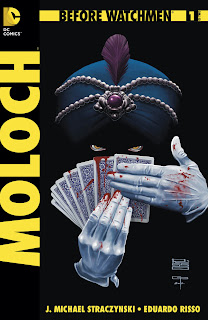 BEFORE WATCHMEN: MOLOCH #2
Written by J. MICHAEL STRACZYNSKI
Art and cover by EDUARDO RISSO
Backup story written and illustrated by JOHN HIGGINS
1:25 Variant cover by OLLY MOSS
On sale DECEMBER 19 • 32 pg, FC, 2 of 2, $3.99 US
Combo pack edition: $4.99 US • MATURE READERS
Retailers: This issue will ship with three covers. Please see the order form for more information.
“We are doing great things here, Edgar. Amazing things.”
And don’t miss the latest chapter of the “Crimson Corsair” backup feature from writer/artist JOHN HIGGINS!
Jim: Not sure why they needed an additional two books in the Before Watchmen group and oddly JMS’ work has been looking like the weakest of the books. A pretty good set of books when JMS’ stuff is the weakest. While I look forward to JMS’ work I know he has misses as well as hits in his stuff. Risso on art is an exciting addition. All in all I think for all the hand wringing by people over the BW stuff, it has been well done and entertaining. I think, heck ’s work was derivative and built on other people’s work, so what if someone builds on his stuff. And…. Watchmen was not the greatest comic of all time (I can hear the cries of heretic now.).
Lee:  I think you are giving this group of mini-series way to much credit.  Silk Spectre is very good but after that... ummm, it's ok superheroes.  It can be argued if Watchmen was the greatest ever, but it's is still one of the greatest.  I think you judging by today's standards and forget what it was like at the time. 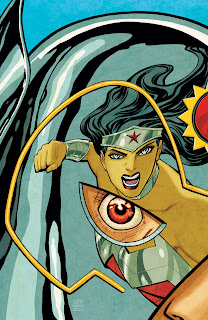 WONDER WOMAN #15
Written by BRIAN AZZARELLO
Art and cover by CLIFF CHIANG1:25 Variant cover by CLIFF CHIANG
On sale DECEMBER 19 • 32 pg, FC, $2.99 US • RATED T
• Who is Orion — and what are the New Gods?!
• Massive changes are coming for Wonder Woman and the entire DC Universe!
• Get ready for round 1 of Wonder Woman vs. Orion!
Jim: Azzarello is in the midst of his best super hero work ever. For all the things I think are wrong with the new DCU, this book is great. It is a truly fresh take on Wonder Woman and the first time I’m always looking forward to the next issue of a WW book. Also Chiang’s artwork is great. He has such clean lines and lays out a book so well, that even with Azzarello writing it reads easy. Plus “The New Gods” are coming back.
Lee:  I haven't picked WW up yet mostly because of Girl.  She loves all things WW and from what I have read there is just a weee bit to much adult stuff in it for her.  I stopped hiding books under my bed years ago and I am not about to start again.  So this is a wait for me.  But I am very, very curious to see the relaunched New Gods. 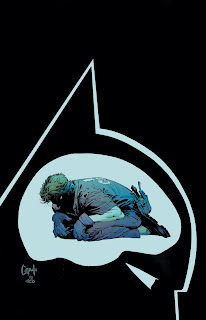 BATMAN #15
Written by SCOTT SNYDER
Backup story written by SCOTT SNYDER and JAMES TYNION IV
Art by GREG CAPULLO and JONATHAN GLAPION
Backup story art by JOCKCover by GREG CAPULLO
Variant cover by GREG CAPULLO
1:100 B&W Variant cover by GREG CAPULLO
On sale DECEMBER 12 • 40 pg, FC, $3.99 US • RATED T
Combo pack edition: $4.99 US
Retailers: This issue will ship with four covers. Please see the order form for more information.
• “DEATH OF THE FAMILY” continues here!
• The Joker’s attacks have taken their toll on Batman and his allies, and now they have to face the impossible.
• The final madness of The Joker’s plan revealed here! Why is he more dangerous now than ever before?
• Plus: In the backup feature, witness The Joker’s confrontation with the Riddler as the horror of The Joker’s plan is revealed.
This issue is also offered as a combo pack edition with a redemption code for a digital download of this issue.
Jim: Batman is a very good, at times excellent book, under the pen of Scott Snyder. Greg Capullo is certainly doing a terrific job with the art. I have some reservations with the changes that have been made to the Batman mythos, but my real issue is the multiple covers. The retailer note says it ships with four covers and I think a few Bat books have four covers this month. Uncanny Avengers had almost 20 covers. My store has sales on the variants and it is in long boxes because so many books have variants. It will never stop as long as idiots keep buying the variants, but it just annoys me for some reason.
Lee: Ok, insulting Watchman requires some type of... correction shall we call it.  Snyder's Batman isn't nearly as good as you keep saying.  Capullo's art is!  But Snyder's writing has suffered somewhat.  His best stuff is when he isn't dealing with Batman.  Don't get me wrong, it's still better than average superheroes but it's not the best ever. 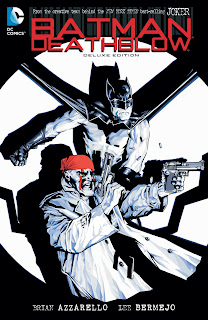 BATMAN/DEATHBLOW DELUXE EDITION HC
Written by BRIAN AZZARELLO
Art by LEE BERMEJO and TIM BRADSTREET
Cover by LEE On sale FEBRUARY 20 • 168 pg, FC, 7.0625” x 10.875”, $22.99 US
• One is the World’s Greatest Detective. The other is a black-ops killer. What happens when the two meet? We’ll never know because Michael Cray, code name Deathblow, is dead. The Dark Knight faces the daunting task of finishing a job that someone else started, but for unknown reasons refused to finish. That someone was Michael Cray.
• Collects BATMAN/DEATHBLOW: AFTER THE FIRE #1-3.
Jim: The new way DC handles their books mean very few new titles on a monthly basis. Every 4 to 6 months it appears 4 get cut and four new books come in. One for each week I guess. That is all well and good, but the collected edition side of DC has been boring also. They have a huge library of great old science –fiction stuff, Charlton heroes, Captain Comet and all sorts of great stuff. You could do “best of” formats and grab Alex Toth, Joe Kubert, and many others and publish some fantastic collections. Instead, we get this.
Lee:  Yeah, I have to agree with Jim on this.  I've complained many times to him about the lack of a coherent plan in DC's trade publishing schedule.  And while this is fine, there is a whole lot better out there that would be better. 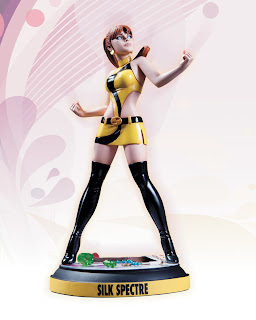 BEFORE WATCHMEN: SILK SPECTRE STATUE
Sculpted by Tim MillerAfter begrudgingly assuming her mother’s heroic mantle, Laurie Jupiter stands ready to fight crime as the Silk Spectre! Straight from the pages of BEFORE WATCHMEN as designed by Amanda Conner, this statue is a lovely addition to any WATCHMEN fan’s collection.
Statue approximately measures 10.5” high x 5.5" wide x 5" deep
$149.95 US• On sale January, 2012
*Allocations May Occur
Jim: This cracks me up. I have loved this mini-series, but a four issue mini-series generated a $150 statue? I can’t imagine too many people are lining up to buy this one.
Lee:  I think the margin is so high on this stuff that they don't need to sell alot. Not to mention I am sure the production run is quite, quite small.  And why are you surprised?  They made a Watchmen toaster for goodness sakes.

Jim: Well all in all another hum drum month from DC since they only roll out new series in groups anymore.
Posted by Jim at Wednesday, October 17, 2012