A little something I picked up at half price at the Baltimore ComiCon.  And how can I resist?  Joe Kubert writing and art?  No brainer. 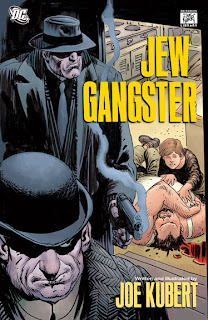 I was pleasantly surprised in that I expected a grand tale of a guy running a gang.  Instead, this is a story of a young guy trying to break into running a gang.

Ruby's a high school student in New York during the Great Depression.  He and his friends watch the local gang leader, Monk Greenberg (or Shapiro) kill a guy who's not paying what he owes, as a lesson to anyone else who owes money.  Ruby thinks school is a dead end, to the dismay of his immigrant parents.  They work long hours in a garment shop and a restaurant but the family lives hand to mouth.

Ruby starts hanging out at the pool hall where Monk bases his operation, doing deliveries at first but working his way in with Monk and getting paid a lot of money.  A couple of his friends run some errands from time to time but stay in school.  Ruby drops out and moves out from his parents' apartment.

Monk has a hot wife named Molly, which eventually leads to a big problem.  Molly starts shagging Ruby.  Monk figures it out.  Monk rapes Ruby's sister and tries to beat Ruby to death, but Ruby jams a broken cue stick into Monks eye.

All the while leading up to this Ruby never met Monk's boss.  After killing Monk, though, Ruby is brought to the boss.  While all the Jews in Monks gang were clearly secular, the boss appears to be Orthodox.  he sports a beard.  He wears a yarmulke.  Nonetheless, he's a gangster.  He makes it clear to Ruby that killing Monk was not acceptable and treatens Ruby's family, including Ruby's sister, who's been taken to the meeting.  Ruby stands up to the boss and makes clear that he's willing to work for the boss but isn't taking any punishment for for killing Monk.  The boss likes his chutzpah and doesn't punish him.

It ends with Ruby still working his way up the gang.  It's a great small scale, slice of life story.  It's not an epic.  It's one young man's start down a path.  The extreme poverty of New York's Depression era immigrants and the lure of high paying work in illegal occupations is obvious.  Kubert, of course, captures it all excellently in both his words and art.  His rough style works just as well capturing poverty as it did capturing the rigors and travails of combat in Sgt Rock and other works.

Now all I need to do is pick up a copy of Yossel April 19, 1943 and some Sgt Rock collections.

And, be sure to come back later today for Part 2 of the Indies Review where I continue to be amazed at the books Lee picks.
Posted by Thomm at Thursday, October 25, 2012