This week the books that I got ended up dictating no cohesive approaching to separating out into groups. I could have gone with some standard breakdown but I decided to just highlight 3 books I thought were excellent and then do more parts in a semi-random matter.

Of course before we jump into the books let’s give out the detailed link for next week’s books and the simple clean link for next week’s books. A five Wednesday month means DC only ships a late book out of the 52 and then has everything else, making the week a grab book of sorts from them. The books that I’m anxious to read for next week are Happy #2, Rachael Rising #12, Joe Kubert Presents #1, and Lot 13. Of course I also have Absolute Final Crisis coming out but that is not a story I will re-read immediately. 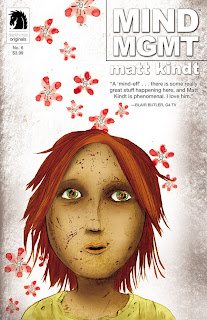 First up is Mind Mgmt #6 by Matt Kindt. I no longer look up sales charts and what not to know if a book is doing well enough to continue or not, but I sure hope this series is doing well. It is well written, has a fantastic story, is layered with a lot of material and it is a book that makes you think about what is and what is not real. Phillip K. Dick was great with making you wonder about what is real and what is not real and this book makes you at least think about those types of concepts. Matt’s art is deceptively simple, because on the surface it is very loose pencil art and much of the definition comes from the coloring, which is a water color palette. On first blush you may think he is lacking in ability, but as you read the story and look at the artwork you start to understand that he is masterful storyteller. His page design is excellent and the flow of the book is also very strong. Also all the characters are distinctive and his use of expressions and coloring convey all the emotions and feelings. This issue we wrap up the first story arc and find out that Henry Lyme is a fugitive from the federal government and from the Immortals. Surprisingly we learn that Mind Mgmt has supposedly been disbanded but many agents are still out in the world. We find out the Meru, the one person who survived Henry’s meltdown has been down this road before looking for answers and finding Henry. This time, according to Henry, something has changed and Meru is now different. One of the best things about this series is how Matt has laid out a ton of information and pulled back the veil of mystery surrounding Mind Mgmt as he gives us new questions and mysteries. So many stories goes go for the mystery and never answer the questions, this series answers a question and poses new ones. This series is an intelligent well thought out series that I’m guessing has a back story that fills a bookshelf. Matt has crafted what is his best work to date and his work has always been top notch. 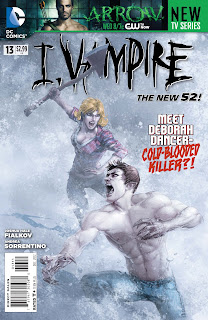 The second of the three books is I,Vampire #13 by Joshua Hale Fialkov and Andrea Sorrentino. First off the art has a Jae Lee type feel to it but Andrea actually has cleaner layouts and a stronger narrative flow to his work. In fact the further we go in the series the more I feel like his work is his own style at this point. The darker coloring enhances the feeling his work evokes. The story itself has been great. In the new 52 way too many of the writers crafted year long stories (or longer) and the books often had that middle chapter feel. Joshua is giving us one long continued story but is building in endpoints to an arc as he goes along. This has allowed him to start off the book with Andrew vs Mary, Queen of the Vampires, have an adventure with Batman, a cross-over with Justice League Dark, a battle with a Zombie Army and has now moved onto a story of Mary vs Andrew. From hero to villain and shades of grey built into the entire story. He deftly weaved in the DCU but never so integrated as to be a super hero book. Joshua has hit a home run and the art is matching the tone and feeling perfectly. I heard a rumor that the sales were hurting the chances for this books survival, but that maybe its trade paperback sales have saved it as it was a surprise hit for DC. I hope the book survives and that this creative team stays together for the long haul. 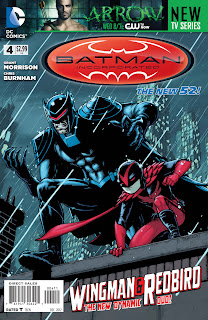 The third book is Batman Inc #4 by Grant Morrison and Chris Burnham. This story by Morrison is encompassing all of his work from the original Batman Inc. storyline and has morphed it slightly to deal with the re-set of the DCU. In this issue Batman and all of his crew (which is a huge cast) fight against the League of Assassins. Talia wants Damian back and Batman is fighting against it. Grant builds in a lot of surprises, great fight scenes and one heck of an ending. Chris Burnham’s art is stunning. His layouts and storytelling are superb and his art style is amazing. It reminds me a little of Frank Quietly’s style, but has so much detail and flair that it is truly Burnham’s style. On occasion Grant has been paired with lower grade talent, it is a treat to see this level of artist doing what is one of Grant’s better story lines. When Grant’s super hero work fires on all cylinders it reminds me of stories from the sixties by Lee and Kirby. He throws out ideas that are used for a page or two and you can see the potential in them to be expanded into some great story arcs. This issue the throw away of Jason Todd as Wingman was just a great idea. Hell Damian has injected a ton of life into the Batman mythology and has been one of the great additions in many years.

All three are great books and great series.

Check back later for Part 2 around 4PM US East Coast Time.
Posted by Jim at Monday, October 29, 2012