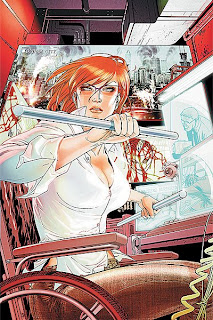 Another title under the Battle for the Cowl banner and is acting as a replacement for the Birds of Prey book I guess, but it is 100% focused on Barbra Gordon which is alright by me as I love Babs.

This issue is all set up, but with a three issue series it almost has to be set-up, crisis and resolution as you have very little time to do much else. The sub-title: The Cure could refer to many things, but the fact is that Babs is focused this issue on what happened to her legs, so the obvious indication is that she may end up no longer being in a wheel chair.

I know I’m going on an assumption and as much as the idea of her being out of the wheel chair and being free to being a masked crime fighter again sounds appealing, I think I’m against the idea. As Oracle and as a person in a wheel chair she has been a real inspiration and a guiding light showing that no one is defined by their disability. My father lost his right arm at around 22 and was right handed. I never knew my Dad when he had both arms and I never even realized that my father was considered handicapped by the rest of the world. When I was about 12 years old I was kidding my Dad and said that he was handicapped. With no malice he responded with a light laugh and asked me if I could tie my shoe with one hand, if I could put on a tie with one hand, could I put on my watch with one hand and then he said “Who’s handicapped”? At 89 my Dad is still not handicapped. Babs has played a bigger role as Oracle and has shown that while she can’t walk, she is not handicapped. Again the cure maybe about Wendy and not Babs, but we shall see.

The story shows Babs getting re-established in Gotham and she is tracking down the anti-life equation (not sure why). We see that she has moved into less then stellar accommodations, but still hooks up enough equipment to be Oracle. The whole being in a normal apartment building thing just rang false for me. At the same time Oracle is doing this the Calculator is visiting his daughter Wendy (the Wendy mauled by Wonder Dog in Teen Titans and now in a coma) and he is also pursuing the anti-life equation. Caught in the middle of this is a hacker who is helping Oracle. In an online game she has a meeting with the calculator and her avatar gets her head blown off and the same thing happens to her behind her computer.

The battle is joined as Oracle and Calculator continue their long running battle with the goal appearing to be the anti-life equation and obviously a cure for Wendy or Babs.

One final comment, the entire Battle for the Cowl is acknowledged as to what is happening in the city, but is part of the background of the story. It could even be argued that this feels to be an Oracle mini-series and is not a true tie-in.

The artwork is strong and Babs is shown as both smart and sexy. It is a limited action issue, but still the artwork manages to keep the book moving and the flow of the story is well done. The coloring has to jump from light to dark, to serious, to semi-comical (when in the role playing game) and manages to do a great job throughout.

Also this has to be my favorite cover for the week, so sue me I’m a guy.

I’m trying to a review or two every Wednesday, but will post each one individually.
Posted by Jim at Wednesday, March 25, 2009