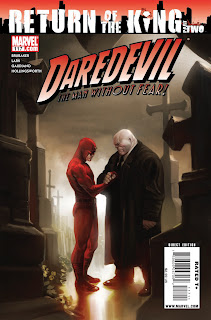 The second chapter (or first if last issue is the prologue) of “Return of the King” (not Elvis) and it appears that this will be Ed Brubaker’s swan song on the book. If it is his swan song he is going out on a high note as so far this has been a fantastic ark.

Part of me is still bothered by the fact that in 20 plus years no one has been able to take the character to any other place then what Frank Miller did for Daredevil. I love this story, but I also recognize the inherent weakness in a character that is becoming stuck in an endless loop.

This issue works its way through the Kingpin returning to New York and Daredevil’s fight against all that has gone wrong in his life and the meeting between the two of them that sets the stage for the rest of the arc.

The Kingpin has come back to New York and immediately finds Turk. Wilson goes out to let the underworld know that he is back in town and things are going to get bloody.

Daredevil is attacking a private eye that photographed him and Dakota, is fighting with Master Izo about the Hand, fighting with Milla’s parents about custody of her and watching Dakota (who maybe the best match ever for Matt) walk out of his life. The Hand wants Matt as their leader and his inability to control himself and the collapse of his world is leaving Matt looking lost and hostile.

Turk shows up and gets the message to Daredevil to meet the Kingpin and they meet. The Hand had set the Kingpin to go up against Daredevil, but Wilson Fisk has other plans. He tells Daredevil what happened to him overseas and proposes an alliance against the Hand, where he and Daredevil will look to take them down forever. Matt wonders what happens to their alliance after their battle with the Hand is over. Fisk delivers a great line to end the book when he says “I wouldn’t worry about after, Murdock…I wasn’t planning to survive..” Wow, can’t wait for the next issue.

The regular art team is back and Lark, Gaudiano and Hollingsworth are like a well oiled machine. Daredevil is blessed to have such a talented crew. Lark has great design, Gaudiano is the glue that always keeps this book having a consistent look and Hollingsworth keeps the book a total “noir” feeling without losing the artwork. The emotion of the story is conveyed well as is the action. The story telling is great as you are never lost reading this book.

Overall Grade A – Stuck in the past – but even a twice told story can be a treasure if told well and this crew is gold.
Posted by Jim at Thursday, March 26, 2009