A Welcome Cross Over Failure 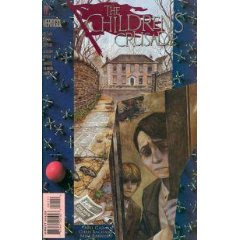 Back when Vertigo was new many of its titles were transfers from the DCU. Titles like Animal Man, Swamp Thing, and Doom Patrol were originally DC but were turned into Vertigo titles when they took to less superhero themed stories and went off into more existential plots. So an attempt to do a cross over event probably didn't seem terribly outlandish in '93-'94 when Vertigo put out The Children's Crusade. With the current Vertigo titles being unrelated to one another, in terms of shared universe, a cross over seems like a foreign idea, but it was a vestige of the DCU origins of those early titles.

The Children's Crusade was 2 issues. Two long issues of 58 and 59 pages each. In addition, elements of the story ran through Balck Orchid Annual 1, Animal Man Annual 1, Swamp Thing Annual 7, Doom Patrol Annual 2, and Aracana Annual 1, but I'm only going to look at the two issues that begin and end the story because I've found that all you need to know about the story is in just those two issues.

Written largely by Neil Gaiman with some assists by Alisa Kwitney and Jamie Delano, the first issue was drawn by Chris Bachalo and the second by Peter Snejbjerg. The impetus for the story is the disappearance of all the children of a small English village. The one child who didn't go missing, because she was in London at the time, returns to London to hire detectives to find the her little brother. She doesn't care about the rest of the children, and really doesn't want her brother back, either, but her mother's sad without him. She ends up hiring The Dead Boy Detectives, Edwin Payne and Charles Rowland, who had previously appeared in an issue of The Sandman and their own limited series.

Paine and Rowland really have no idea what they're doing. All their knowledge of sluething comes from 19th century and early 20th century serials or novels, in the case of Paine, and noir movies in the case of Rowland. They go to the village by train, even though they're ghosts. They find the more direct forms of travel available to ghosts to be frightening and try to avoid them. 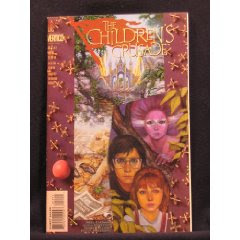 After much stumbling around they end up following Tim Hunter, of Books of Magic fame, to Free Country. Free Country is another dimension that's a sort of haven for abused children from throughout the centuries. Several are the pitiful remains of the actual Children's Crusade of centuries past, while others come from more recent times. One of the leaders is a kid named Wat who had a hand cut off for stealing. Needless to say, they're all bitter about the treatment they received from adults in the real world. Unknown to them, a Cockney kid named Junkin' Buckley and a talking rabbit named Jack Rabbit are manipulating them to bring over every child in the real world to Free Country so that Jack Rabbit, who is really the same evil monk that lead the original Children's Crusaders into slavery, can once again gain control over large numbers of children to sell to various buyers.

The Free Country leaders have already brought over a lot of children, not just the missing kids from the English village, but the numbers are somehow taxing Free Country's ability to sustain them all. That's the plot thread that brings in the children from the various Annual stories. Each of them has powers of some kind that can sustain Free Country, even if they're not still there. The main hope, though, is that Hunter's great potential magical abilities will stabilize the place indefinitely.

The telling of the story has some nice touches. There's the usual bits of humor in the ineptitude of the Dead Boy Detectives and some additional humor in the Free Country ruling committee arguing about how to welcome Tim Hunter while failing to recoginize him when he tries to introduce himself. A bit of farce in those points, but at other points there's some real poignancy, particularly in the story of the survivors of the original Children's Crusade. Told in a first person narrative, the horrific need to sacrifice one of their own to escape their captors is as effecting as any story you'll read.

This story has a hard edged look at childhood. As bad as the abuses of the adults are, the kids don't behave much better. On the lesser side of ill behavior, Tim Hunter is his usually disaffected self, Maxine (Animal Man's daughter) is simplisticly animal centric like her father, the girl who hires Paine and Rowland is petty and spiteful, her little brother is fat and nasty, and Suzy, of Black Orchid, is totally flightly and insubstantial. More maliciously, Buckley is purely greedy without conscience, Wat is single minded without thought of collateral damage, and the boy who survived the original Children's Crusade is blinded by that experience. Only the ghostly Paine and Rowland maintain any sort of childlike wonder or innocence, which is sort of surprising because they were both killed by abusive schoolmates at the same English private school.

It's something of a stretch to include all the other child characters from the other books Vertigo was publishing at the time. I think it would have worked just as well with just Hunter and Maxine, leaving out Tefe from Swamp Thing, Suzy from Black Orchid and some girl from Doom Patrol who's name escapes me. From what I've read the series wasn't very popular and shortly thereafter Vertigo gave up on the idea of cross stories between the universes of its titles. So, even though this was a good story, it was better for Vertigo that it wasn't a success. The proliferation of cross over events in Marvel and DC is a real drag on the ability of writers to tell good stories. By this happy coincidence of failure, or at least lesser results than hoped, the Vertigo line went in a different direction, away from DC, and now has such wonders as Scalped, Unknown Soldier, Haunted Tank, and Fables. Why, two of those even have DC origins, but without the burden of hewing to the DC history are being told in entirely new and exceptional ways. 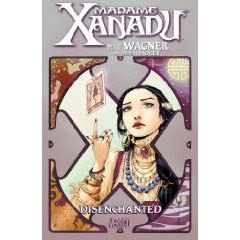 As a last tangentially related bit, I want to give a shout out to Vertigo's Madam Xanadu which had a sexual encounter depicted with actual nudity and not just forced, artfully placed bed sheets. I don't know about you and yours, but when I've had sex with my wife, we don't carefully place the sheets to cover ourselves when we're done, nor when we're in the midst. Hopefully other titles aimed at adult readers will follow in these foot steps, especially such graphically violent titles as Invincible, Gemini, and Proof. I should also acknowledge that Scalped crossed this bridge awhile ago, but Madam Xanadu brought it more to mind for me because the 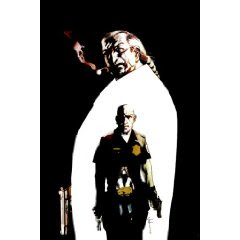 nudity involved the lead character, although, come to think of it, Dash Badhorse was naked in Scalped, too. So, my apology to Jason Aaron and Scalped for not giving them the appropriate shout out earlier.
Posted by Thomm at Sunday, March 29, 2009