Leaving Batman for awhile. Not that there aren't plenty of other Batman stories to talk about. Aside from the estimable Dark Knight Returns, there's the just purchased Faces and Batman/Grendel, both by Matt Wagner. Still, I'll save those for another time. No need to turn this into the Batman corner.

Instead, we'll visit another corner of the Comics Cabinet. The magic stuff. I've always been ambivelent about the magic stories, partly because of the difficulty of having inalienable rules in magic stories. As great as The Lord of the Rings is, what's to say Gandolf couldn't have just magicked the whole thing into a happy outcome? Other than the fact that it would have been a dull story. However, Fables is one of my favorites and is all about magic, just showing that you shouldn't rule something out just because of its genre.

Oddly, I don't really think of The Sandman as stories involving magic. They're more of an elemental quality involving core aspects of humanity, embodied in goth humanoids. Which is how 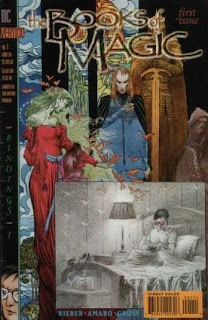 I ended up reading The Books of Magic. The limited series written by Neil Gaiman was a given, but a more surprisingly well liked line of stories was the ongoing series written by John Ney Rieber. The lead off arc in the first 4 issues was mostly drawn by Gary Amaro and inked by Peter Gross, except for the 4th issue, where Gross did some of the pencils as well as the inks.

The story fleshed out the minimally known character of Timothy Hunter that had been introduced in the limited series, which largely served as a device for touring the magical aspects of the DCU. Tim's lower economic existence in London, living with his one armed father and the memory of his late mother is pretty bleak, despite the general economic successes of its 1994 setting (and publication). School is along the model of Pink Floyd's The Wall, and Tim's largley friendless. His father wallows in his own misery and ignores Tim. Tim's highly self critical nature isn't likely to endear him to anyone, either.

Meanwhile, in Faerie, the land is dying, though that's cloaked by the magics of Queen Titania. Her one time lover and current Falconer, who can transform into a falcon, is a centuries old human named Tamlin. Tamlin can no longer live with the deception and exposes the truth of the decayed state of Faerie before fleeing Titania's wrath to earth to try to awaken Tim's magical abilities, which might save Faerie. 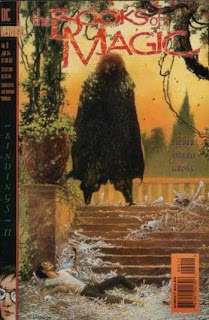 Before Tamlin can explain much or test Tim much, he's forced to return to Faerie to save Tim from being killed by a faerie. Once he's gone back, an apparently homeless but magical old man lets Tim know that Tamlin is Tim's actual father. Tim then tries to go to Faerie to help Tamlin but ends up in the dwelling of the Manticore.

The Manticore has used the fact that Titania had cut ties between Faerie and earth to slowly poison and take over Faerie. He's the cause of the decay and iminent death of Faerie. He also likes to obtain young humans and rare creatures to play with before eventually killing and consuming them, then turning them into additions to his menagerie. Tim doesn't play along with the word games, so the Manticore moves right into the hunt, but his home is designed to leave the prey with no place to hide or mount a defense. At the last, Tim manages to revive a unicorn, which slays the Manticore. 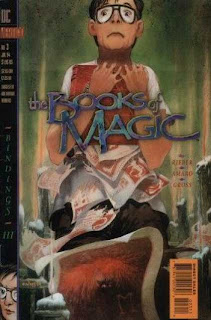 However, two important things have occurred during this sequence. Tim is scratched by the Manticore, which puts an extremely deadly toxin into his system, and the Manticore's magics that had blocked Titania's attempts to re-establish ties with earth are removed, thus reviving Faerie. The former, though, causes Tamlin to use a spell to substitute himself for Tim, causing Tamlin to die and Tim to live. Titania, being a woman of more passion than reason, blames Tim for Tamlin's death and swears vengenance on Tim, no matter than she had shortly before been seeking Tamlin's death herself.

This was an excellent piece of work. Better, I think, that the DCU magical tour that Gaiman had done in the limited series. Tim's character was considerably more developed and important ongoing story elements were established, such as Tamlin being his father and Titania possibly being his mother, as well as his difficult relationship with Faerie as a whole. One element that 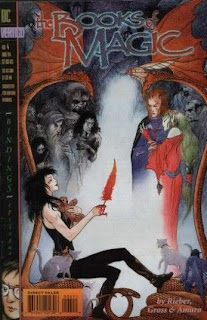 would be a huge force in the character throughout subsequent stories was his first girlfriend, Molly, but she would be introduced in the one and done story of the 5th issue (drawn and inked by Peter Snejbjerg). And the 5th issue also introduced the demon Barbatos, who would play a long running part in the stories, quite often amusingly. Bonus, Death makes a substantial appearance in the 4th issue. Always like Death, even when not portrayed as a hot goth chick.

The art, too, was well suited to the story. Amaro, Gross and Snejbjerg all employed a realistic style. No overly voluptuous women or steroidal men here. No abstract representational, minimalist lines, either. Tim looks like a 13 year old dork, and he is. Titania is appropriate glamorous, if green, but she doesn't have a gravity defying rack, though if anyone logically could, I suppose the Queen of Faerie would certainly qualify. The inks showcase the pencils, neither drowning them nor elevating them beyond what they are. They blend well, as do the colors.

The story still has the problem of me not knowing what the parameters are on the use of magic, and Tim in particulary is something of a cypher in that regard. There are hints that he could re-work the entire world with his magic, once it's reached its full potential, but I don't really know what that means in terms of what rules there are limiting that. Magic stories never involve a 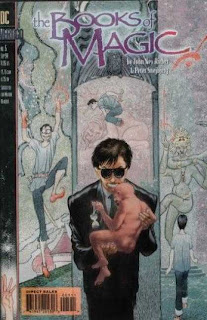 magician who is all powerful, as that would make him/her a deity rather than a human. Deity stories can be good, too, as both the Bible and the myriad mythology stories of old attest, but deities are removed from humans, not human.

Things like why the Manticore's magic can stop Titania's magic aren't known. The mechanics of any magic are an unknown, so a mere statement that it's so is all that's needed. This is the opposite of science fiction, which spends a lot of time trying to justify how things work in accordance with known laws of physics. There are no known laws of magic because in our world there simply is no such thing. Not verifiably so, anyway.

This, though, is a criticism of magic stories generally, not of Rieber's stories. Rieber's stories are excellent. I most definitely recommend picking up back issues or trades, if they exist. Rieber captures the irritation of adolesence, both to the child and those around him, perfectly. Tim's a pain in the ass to himself and to others quite often, subject to the mood swings of his age and hormones. He lashes out frequently, but is aware enough to recognize his mistakes and attempt to correct them. He has depth and the reader cares about him, even if he's not entirely likable all the time.
Posted by Thomm at Sunday, March 22, 2009