I think the malaise has hit full force on comics and I found out Saturday it was not just me. On Saturday I was out with a follow comic fan to lose money to the state of Maryland (also called playing Keno) and watch the Maryland game (also called a slaughter). The names will go unmentioned; by I will call my friend Mr. Negative. He was shredding every book that I could mention. What was worse is he pointed out some flaws in books that on my reading I had liked more, but many of his points were valid and therefore my opinion shifted on a couple of books. Bad news it was a rough week for comics, good news it was an east week to write-up.
THE BEST 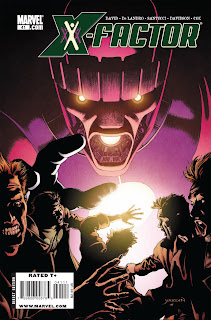 X-Factor #41 – Writer Peter David, Pencils Valentine De Landro & Marco Santucci, Inks Pat Davidson & Marco Santucci, Colors Jeromy Cox. X-Factor is such a great read. It picks up immediately from where last issue ended as Jamie and Layla are reunited. Layla tells Jamie she will explain everything later and tell’s him that he needs to take her hand as she drags Jamie back to her in what appears to be the future. We also catch up with the rest of the group and forward the plot developments that are going on with them. We are engaged with Jamie, Layla, Monet, Guido, Darwin, Siryn, and the rest of the cast. We have a few great twists in the story line and another strong cliff hanger which has you just begging for the next issue yet again. I’m being vague about what is going on because I want you to read the comic and find out, but at least convey the fact that you are caught up in all the plot elements going on and thoroughly entertain with both humor and drama deftly interwoven.Peter David is at the absolute top of his game again and I can only hope Marvel leaves this book alone and let Peter work his magic in this little corner of the Marvel Universe. I’m even almost liking Longshot. The artwork is well done also. Although we have two pencil artists credited and I can see some stylistic differences the differences are minimal and do not impact the flow of the story at all. The coloring also is well done and certainly has to be a challenge as we are shifting scenes many times in this story.
Invincible #60 – Writer Robert Kirkman, Pencils Ryan Ottley, Inks Cliff Rathburn, Colors FCO 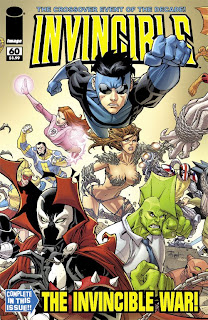 Plascencia. I almost did not put this on the list, but the ending made it. This is why creator owned books are more exciting to me. The end point after the “Invincible War” is that the world is pretty well shattered and Atom Eve looks to be seriously injured. Shoving all the other Image super heroes in the book called in to fight all the Invincibles had its moments, but was too much about making sure all the characters got included then really anything needed for the story. Angstrom makes a great main nemesis for Invincible and regardless of the fact the creatures he escaped to at the end of this issue said he works for them now, we have to see Angstrom again someday. Of course a group of the bad “Invincibles” is still stranded in another dimension and certainly could be brought in again. The devastation caused by the battle will also have repercussions and they actually threw in a plot point that will effect Astounding Wolf-Man’s book (always easy to do if you writer both books). Now Mark has to pick up the pieces of his shattered life.

Lillim #1 (of 5) – This was a book doing a story of the Norse Gods and was all over the place. It was often in Asgard, that what appears to be today and was tough to follow. The story never grabbed me and I actually barely finished reading the book. The art was okay, but was off on occasion and was too slick. Cancelled.

Stingers #1 (of 5) – Very generic, weak art, stereotype characters and possibly plagiarism with the Hawk character and a story that did not pull me in fast enough. Cancelled.

This was an off week for comics for me. It was made especially odd that the best book I read I read on Wednesday and it was downhill from there. Oh there were a couple other books that almost made the grade (Potter’s Field Stone Cold and Hotwire #2) and Rawbone almost did not make it to issue #2, but is was just an off week. Hope next week I’m more excited about comics.
Posted by Jim at Tuesday, March 24, 2009