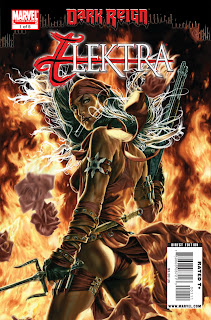 This is another Dark Reign mini-series and another 22 page comic for $4 from Marvel. Still I was curious to see what was going on with Electra as I had always enjoyed the character that Frank Miller had introduced, but feel she was overused and become too convoluted due to that overuse. I no longer felt a connection with the character. As much as I hated Secret Invasion, the fast and loose nature of the time line has given Marvel the ability to re-set Electra at a new ground zero. Add to that Zeb Wells as the writer (who has shown some good work here and there) and my curiosity in seeing Clay Mann with an inker other then DD’s inker Stefano (who turns any artist into a noir story teller) and it made it an easy decision to check this book out.

The first issue was good enough to have me coming back for more. We start the book with Electra coming back from the Skrull planet. For unknown reasons they had experimented on her and had left her battered from apparent torture or whatever. Iron Man tells his men to help her as he refuses to let anyone die who has just escaped the skrulls.

We then skip over months and first SHEILD holds her to try and help her heal and it is unclear why she can’t heal. Then HAMMER takes over from SHEILD and she is held captive and still appears beaten up and weak. We have hints and mysteries being thrown about, but nothing concrete.

Then Paladin shows up with a contract for a ridiculous amount of $82 million dollars to kill her. After Paladin hits her and knocks loose a tooth, she uses the tooth to attack Paladin by spitting into his throat. She fight Paladin and then starts to dress in her more normal fashion as a bunch of HAMMER troops burst into the door. Some over the top stuff in issue #1 and some decent fight scenes.

Electra says nothing the entire book and for a mini-series that should focus on her, I’m getting a lot of mysteries and very little cold hard facts on the character and what has happened to her. Still it pulls off a good enough effort to pull me back for issue #2.

Clay Mann and Mark Pennington with Matt Hollingsworth deserve a lot credit in producing a solid art job that effectively told the story and did a great job with the action scenes.