Indies Preview Review for May Part 3 of 3

You Have Killed Me HC by (W) Jaime S. Rich (A) Joelle Jones
Things just can't get any worse for Antonio Mercer. A private eye by trade, a dame from his past has resurfaced in his life as a client - along with all of the emotional baggage he thought he"d left behind forever. Of course, this unusual client doesn't have just any case; her family is mixed up with seriously dangerous people, and the body count is just starting to pile up! $19.95 Visit Jones here
Lee: Oni has published a lot of good crime comics in the past and this looks to follow in that trend. And, the art looks really good too! I’m sold.
Jim: Yeah, I have to agree. I missed out on Queen and Country and Whiteout when they first came out, I'm jumping on this bandwagon early. 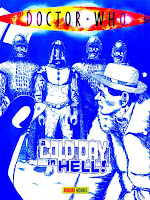 Doctor Who: Cold Day in Hell SC by (W/A) Various
The enigmatic Seventh Doctor's comic strip adventures are collected for this first time in this volume that reprints 11 classic stories from the pages of Doctor Who Magazine! The famous Time Lord encounter Death's Head, heat vampires, the Ice Warriors, and even himself. The original black-and-white strips have been digitally remastered and are collected for the first time ever. Writers include Grant Morrison (Final Crisis), Simon Furman (Transformers), Dan Abnett (Warhammer), and Alan Grant (Batman), with art from Bryan Hitch (Fantastic Four), John Higgins, Dave Hine, and more. $23.99
Lee: What are the odds there would be not one, but two, Dr. Who books in the same month? I’m not sure which Dr this is but that’s a talented group of writers/artists attached to this collection. I’m sure it’ll be nice to read and look at, but I’m not sure I’m going to buy it.
Jim: Pass. Dr. Who is just not my cup of tea. I think it is more of a Brit thing, then an America thing (not that he does not have a hard core fanbase here, there are 300 million people plus here, so if even 1% of 1% of the population would buy it these guys would be giddy). 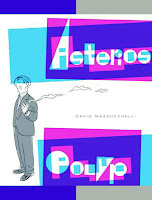 Asterios Polyp GN by (W/A) David Mazzucchelli
Meet Asterios Polyp: middle-aged, architect and teacher, aesthete and womanizer, whose life is upended when his New York City apartment goes up in flames. He leaves the city and relocates to a small town in the American heartland. But what is this "escape" really about? As the story shifts from present to past, the pieces of Polyp's life come together and we meet Hana: a sweet, smart, first-generation Japanese American artist with whom he had made a blissful life. But now she's gone; what has happened to her? Mazzucchelli's extraordinarily imagined world of brilliantly conceived eccentrics, sharply observed social mores, and deftly depicted asides on everything from design theory to the nature of human perception becomes a masterpiece: a great American graphic novel. 344 pages. $29.95
Lee: That’s a lot of pages for not a lot of money. Mazzucchelli has come a long way from his roots as a superhero artist. He’s quote the indie artist and storyteller. Pantheon has been publishing some really good alternative material lately too, so I’ll probably take a chance on this.
Jim: Mazz is a talent and the premise sounds great and I have certainly blown $30 on a lot of material that was not worth recycling as toilet paper, so I think I'm taking a chance also.

Classics Illustrated Vol. 05: Hamlet HC by (W) William Shakespeare, Steven Grant (A) Tom Mandrake
William Shakespeare's Hamlet is one of the most revered and best-loved plays of all time. The story of a young man who strives to avenge his father's death has been performed and read constantly since it debuted at London's Globe Theatre over four hundred years ago. Madness, family, and revenge are only a handful of the universal themes found in this tale. Tom Mandrake's art combined with Steven Grant's adaptation truly realizes the dark nature of this story. $9.95
Lee: Classic Mandrake with an outstanding script by Grant. I really, really like these Papercutz reprints.
Jim: I can't do it. Classics Illustrated was okay when I was a child (back in the Stone Age), but now I have no interest.

Cholly and Flytrap: Center City HC by (W/A) Arthur Suydam
The classic noire action-adventure from comics superstar Arthur Suydam (Marvel Zombies), now collected for the first time, with new, hand-painted colors from the creator himself! Center City remains the belly-button lint of surviving society, a final human outpost oozing crime and racial tension between man and machine. Enter Cholly and Flytrap, who get caught in the crossfire between the city's two power brokers: the Siamese-twin Hobbs Brothers and paranoid paraplegic millionaire Amiel Luvitz. When sumo-master Flytrap is mistakenly shanghaied and forced into slavery in a secret fight world, his partner Cholly's odyssey to rescue him from certain doom begins. A ground-breaking and compelling epic told by an ultimate storyteller, now in a deluxe hardcover edition. $19.95
Lee: If I remember correctly, this was originally published in Marvel’s Epic magazine back in the early 80’s. It was a fun little story with great art by Suydam. It’s very Heavy Metalesque.
Jim: I'm a little surprised to see Radical go down the reprint road, but I think often a publisher woes a creator by doing a "beauty" project for them.

Seaweed Vol. 01 HC by (W/A) Ben Balistreri
Emmy Award-winning designer Ben Balisteri, designer for Cartoon Network's Foster's Home for Imaginary Friends, releases his first self-published graphic novel. Mildew the bat doesn't have long to live, but he holds a mysterious map to the White Library, where eternal life and cures for any affliction can be found. He entices Seaweed and Poisson to take him in their boat on an incredible high sea adventure with the map as their guide. The volume also includes a bonus making-of segment detailing the artist's process for creating his lush animated-film style from thumbnail to finished product. $29.95 Visit Ben at his blog here
Lee: I’m always up for a good adventure tale. And this looks like a doozy of a tall tale. The cover does a great job of selling this as equal parts humor and adventure. It doesn’t hurt that Balistreri has lots of animation experience so it should read well!
Jim: Way too pricey and way too cartoony for my taste. When I want this type of material I want to watch it as a cartoon. 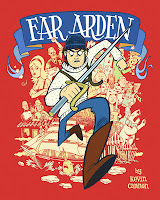 Far Arden HC by (W/A) Kevin Cannon
Meet Army Shanks, crusty old sea dog and legendary brawler of the high Arctic seas! He's got just one mission: to find the mythical island paradise known as Far Arden, which lies hidden, so they say, in the wintry oceans of the far North. But there's more than just water standing between Shanks and his goal: he'll have to contend with circus performers, adorable orphans, heinous villains, bitter ex-lovers, well-meaning undergraduates, and the full might of the Royan Canadian Arctic Navy! Not to mention he's not so sure how to get to Far Arden in the first place! Far Arden is an epic journey through a world not quite our own, written and drawn with strokes bold and swift. Thrilling, eccentric, lusty, genuinely moving, and often hilarious, this may be the best adventure comic you'll read all year. $19.95 Visit Kevin here and read the book here
Lee: Another web comic makes it to the printed page. Month after month there are more books like this. I read the first chapter and I enjoyed it. A humorous romp with fun, cartoony art which looks nothing like the cover. But, this is to much fun to pass up.
Jim: I do love that web comics are making it to the printed page more and more often. I think we are starting to see that the business model for webcomics is heavy upfront investment of time and talent and then build a fanbase and get published. A huge gamble, but with some decent upside potential. I guess the advice is, do the webcomic, but keep your day job. 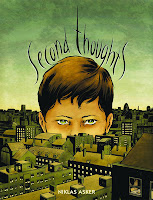 Second Thoughts GN by (W/A) Niklas Asker
Jess is a writer living in London. Andrew is a photographer on his way to New York. They do not fall in love - not exactly - but their brief encounter in Stansted Airport will impact both of their lives more than they can imagine. In Second Thoughts, the clean, emotional ink-work of Swedish newcomer Niklas Asker guides two characters through modern city life and love, as they struggle separately yet somehow together. Past and present, reality and fiction overlap in this sweet, haunting, and ultimately inspiring graphic novel. $9.95 Visit Asker here, and the gn’s official webpage here
Lee: I’ve always liked the diversity of Top Shelf’s offerings. This is as different from ‘Far Arden’ as any book can be. There are many reasons to try this. One, Asker’s art looks good. Two, the story sounds interesting. Three, Top Shelf publishes some of the best real life comics out there. And, that’s good enough for me.
Jim: And the price point is reasonable. When a regular comic often cost $4. $10 for this sounds like a bargain.


Lee: A very good month indeed. Just when I get bored and wonder where comics are going, along comes a great month like this.
Jim: All in all a very good month, which means it will cost me a lot of money. But not really when you consider the bang for the buck the indies are ahead of the curve compared to the big two (most of the time).
Posted by Lee at Friday, March 27, 2009