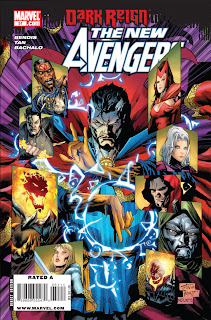 Okay I really want to try to hang onto reading New Avengers and Dark Avengers as they are key books to being involved in the Marvel Universe and if I drop these series than I have to basically drop a bunch of other Marvel books. Small confession: I enjoy comics and I like having a fairly decent size stack of books to read every week (hell I owned a store at one point), but this type of tripe with a $4 cover price makes it very hard to hang in there.

This issue was essentially two stories which intersect at the end.

One story is about who will be the new Sorcerer Supreme as apparently Dr. Strange broke so heretofore unknown rule and now is still a magician, but can’t be THE MAN anymore. And for the record I hate this idea as I have been waiting for a billion years for someone to come into Marvel and write Dr. Strange as an ongoing series again and this just marginalizes the character!!!!!!!

The Hood is told by Dormammu (the dreaded one) that if he kills Dr. Strange he gets to be the Sorcerer Supreme.

Dr. Strange is roaming around the world interviewing potential people who he thinks maybe the new SS and is talking this issue to some Young Avenger clown that I did not even know exists. After the Dr. and the young mage share a cup of coffee and do the “Bendis talking heads” (patent pending). The Dr. walks out and runs into the Hood.

Meanwhile: The undark Avengers are trying to deal with being a real group and sit around a table in a kitchen trying to decide who will be the leader and do the “Bendis talking heads”. Hawk – er Ronin is determined by default to be the leader and their first action is to bully Spider-Man into revealing his newly secret identity to him (as it was all Mephistoed fixed after the big reveal a couple of years ago). Peter wussies out tells them his secret identity.

Just then a knock on the door (knock, knock) and a f**ked up Dr. Strange drops on their doorstep.

I mean $4 for a regular size comic and I get this!

Overall Grade D – For I’m a dumbass for buying this book or is that dumas?