The Best and the Rest of Last Week

It has been a quiet couple of weeks to start off the New Year and when you add into the mix no books really shipped the last week of 2009 we have had three weeks of relative calm. I know Marvel started the Siege, but as with many of the event type of books it was more about set-up then getting the story going. Plus I think there is very little mystery as to where we are going with this story since Marvel is trying to move to the heroic age. Now quiet week or not we had some great books this week and one book that I putting into the Worst category. Finally I have decided on the last category to be called Other Books of Interest and have Thomm to thank in finding that titling. 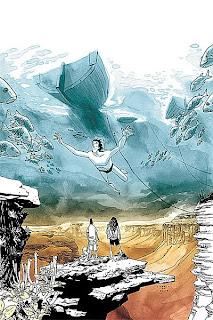 Daytripper #2 (of 10) – Writers/Artists Fabio Moon & Gabriel Ba, Colors Dave Stewart. If I said I know where this story is going I would be a liar. Brás de Oliva Domingos who was apparently killed at the end of last issue is again our central character. This time we seem to be back at an earlier point in Brás’ life as he and a friend are traveling around their native country of Brazil and are in Salvador. Brás meets a beautiful woman Olinda. She is mysterious and beautiful and Brás is quite taken with her. After a passionate night of sex he goes to find her amidst the celebration of Iemanja’s Day and dies as a drowning victim while offering gifts to the Queen of the Seas. In some ways when you peel back the story you almost wonder why you are so taken with the story. It is deceptive in how simplistic it is and yet how utterly charming and engaging it is at the same time. Are these dreams, hallucinations, or wishes for what he would have wanted his life to be? Perhaps it is a story of slices of life inter-cut with fantasy, a different way of looking at a life and as a chapter ends it is like a death? Why I don’t know where we are going I do know I want to be onboard for the journey. Of course the simple explanation is Brás is an obituary writer and these maybe just him inserting himself as the person who died and embellishing what occurred. 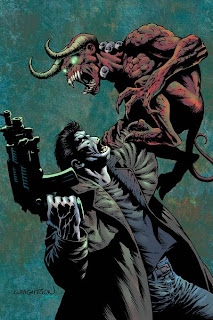 Ghoul #2 – Writer Steve Niles, Art Bernie Wrightson, Colors Tom Smith. I have a huge crush on the work that Niles and Wrightson have been doing lately. From the Dark Horse story, to Dead She Said to the Ghoul each series has gotten progressively better. If the Ghoul is over in three issues and we never see the Ghoul again I may breakdown and cry. This character is so much fun and Klimpt as the LA Detective being pulled into Ghoul’s world is a great point of view character. This issue we learn the Ghoul’s name is Kevin, that you can use big guns to kill demons in our world, we meet Doc Macabre and more. Each page reveals more about the Ghoul and we see Detective Klimpt slowly accept all of the insanity that he is being drawn into. Now we are only getting 16 pages of story and art, but the spot illustrated text piece in the back is giving us tons of backstory on The Ghoul and is an excellent second story. The horror/monster/private eye noir category may only have one true entry, but they win the genre prize as well as the prize for great story telling and great art. The fantastic seems real and the characters are people we would want to meet.

Invincible Iron Man #22 – Okay so Marvel is pulling together Cap, Iron Man and Thor to usher in the new Heroic Age, but boy are they treading water with this title and while it tries to be good this story is falling apart for me. Last issue ends with Thor hitting Cap’s shield to restart Tony and this issue we find it does not work. All the heroes disappear and all of a sudden it is like we are in a hotel that is the hospital they have been doing all of these procedures to bring Tony back to life. The Ghost shows up and Maria Hill is getting people to carry Tony Stark who is comatose and Pepper who is recovering from heart surgery into a stairwell. Cap brings back Dr. Strange, (who now seems to be pretty good with his hands and magic regardless of all the build up in Dr. Voodoo and his own mini-series showing him to be a shell of his former self) in order to revive Tony. Dr. Strange goes into Tony’s dream world that we have been seeing flashes of for the last three issues as some sort of allegory for what is happening in the real world. On top of that we see Cap (Steve Rogers) floating around with the shield. This is a problem since Marvel made a huge deal about the shield and it was going to Bucky and that book seems to have only been read by the fans as the writers have ignored it totally. On top of that the Iron Man title has been an exercise in treading water to keep Tony off stage until the proper time. That idea is okay because they are trying to keep tight continuity but it goes off the rails with what they are doing with Cap and Dr. Strange. I’m barely hanging onto this series.

OTHER BOOKS I WANTED TO MENTION

Batgirl #6 - This book is really doing well. Every issue is building on the one before and all the characters are being developed well. I was really hesitant about Stephanie being Batgirl, but now she is fast becoming a great character. The art by Lee Garbett and Trevor Scott doesn’t hurt at all. When they have enough time to give it their all Garbett and Scott are a top flight art team and one to watch for in the future.

Catwoman #83 – The Blackest Night book is another revived title for one more issue. I liked this book a lot. Tony Bedard took the story point of Catwoman killing Black Mask and made it into one heck of a story. On top of that he tied it into Gotham Sirens and added a nice twist with Selina’s sister escaping the asylum she was in and setting her up as enemy of Catwoman. This was a heck of lot to do in what could have been a total throw away issue.

Power of Shazam #48 – A very good book. Eric Wallace (writer) did a great job using Osiris’ rebirth as a Black Lantern to advance and recapture the history of the Marvel Family and the Black Adam family. I found the story to be a great read and so far I have to applaud DC with these Blackest Night issues that have been very well done and not just throw away books like I thought all of them would be, only Weird Western Tales has fell into that category. Don Kramer appears to be experimenting with his art style and I thought it was a little too heavy and dark at times, but fit the story itself very well. Kramer is another rising art star in the DC stable of artists.

Sadly the Ravens were beaten by the Colts, but under our sophomore season coach, quarterback, offensive coordinator and running back we have made it to the playoffs two years in a row. Now I want a Super Bowl win, but it is important to establish a solid foundation to put the team in line to be in the playoffs year after year. The Ravens have a great young core and will one day have to learn to play without Ray Lewis, but we look ready to do that. One big thing we have not done is get a decent wide receiver corps and maybe next year we can fix that problem.