The Siege #1 - Another Review

James is a fellow comic fan and also has been another panelist on Cosmic Comix Conversations, so we have had debates for years on the merits of various books. He felt that I may have missed the boat with my review of Siege and offered up this counter point review. Thanks James. I love different viewpoints as often I'm swayed by someone showing me what I may have over looked or missed or why I'm flat out wrong. 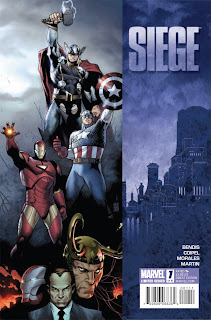 
I wanted to make a counter view point to why I enjoyed Siege #1. I get why you had issues with it but I think I can logically give you a reasoning as to the story beats.

Volstagg was a bit of an odd choice but if you reread JMS’s Thor run you’ll see that one of the big problems facing the Asgardians was boredom. They didn’t like Oklahoma, Hogun is seen hunting boar in Texas, Thor had to discipline the whole kingdom after a playful fight killed one of the gods. Boredom was one of the reasons why Balder agreed to move the gods to Latveria. So Volstagg setting out on a quest didn’t bother me too much. He is a warrior by nature and is acting like his quasi-role model Thor. Thor gets to have adventures in Midgard, so why not emulate his actions. Volstagg might like food, wine and women but what better way to have all three then journeying across the country and fighting bravely, wooing women and being rewarded with a Five Guys Burger or 9. His inexperience in Midgard is just an extension of why the Asgardians shouldn’t be on Earth. This brings us to Osborn’s deal with Loki.

Osborn doesn’t see Asgard as a new problem, just one he had on the back burner until he could consolidate enough power to take it head on. Since he took over, Osborn has been systematically trying to fix what he sees wrong with the Marvel Universe, i.e. Dark Avengers and The List series. The first arc of Dark Avengers had them fighting to help Doom keep Latveria. It was part of the deal with the Cabal. Everyone in the inner circle gets to help each other out but will receive something in return. Osborn was just doing Doom a solid in return for a favor later. Much the same way Loki would keep the Asgardians, specifically Thor, out of Osborns way while Norman gained power. Loki has always wanted to supplant Thor, he caused his banishment in JMS’s run for killing his grandfather. He also wants to rule Asgard, he was doing a nice job of it by using Balder as a puppet. Once all of that came into play, and then subsequently came crashing down, his next move was to take Asgard, hence needing Osborn to assault it.

If you look at what Osborn has access to it’s not surprising how large a force he can call upon. Osborn at this point has Hammer, The Initiative(50 states worth of superhero teams) and the Hood’s forces, not to mention any registered super hero that joined him because of loyalty to the US and it’s laws. He has consolidated his power base, he is insane enough to not feel the need for Presidential approval and feels justified in his actions after seeing Soldier Field wiped off the map. His manipulation of events can clearly be seen, while Loki’s manipulation of both Osborn and Balder shows he is the master manipulator.

We have a book that moves at a brisk pace and wastes no time in getting to what every fan wants to see, the assault on Asgard. It’s refreshing to have an event like this that is only a four issue mini series. Thor and his fellow gods are actually seen to be in some trouble fighting Osborn’s forces. They even give us a brief idea as to where the current storyline running in the Iron Man book fits in.

The appearance by Steve Rogers is meant to show that he is about to rally the superhero community together to aid his friend. I understand taking exception to Steve watching TV in costume but it would have looked worse if he was hanging out in a flannel shirt and a pair of jeans, kicking back and drinking a beer. However, this way he is easily identifiable for the reader and ready to gather the troops next issue to take on Osborn. It’s a criticism that could have easily been fixed if they had shown a quarter panel of various heroes reacting to Thor being beat down and a red glove reaching for the familiar shield.

The back up by Quesada of how everything was supposed to be interconnected was a nice way of showing how the Marvel Universe got to this point. I realize it was framed as a “We had this all planned out” but if just casually read it creates a nice backdrop to how we went from Avengers Dissassembled to Siege. The Marvel Universe has always been about having tighter continuity then DC, this feature further illustrated that.

I found the book enjoyable, it gave me what I wanted and surprised me with the speed in which it moved the story along. If the Avengers are reformed under the traditional grouping, I’ll be the first in line to buy it. No one complained when Grant Morrison reunited the Big 7 at DC for JLA, I can’t see anyone really not liking Marvel getting back to their main Avengers roster. Also doesn’t hurt when all three characters of Cap, Thor and Iron Man are set for movies within the next 3 years.
Posted by Jim at Thursday, January 07, 2010