Smart, Even with the Balloon Distractions

On to the last of the trades I re-read while I was laid up after my surgery in October. Of course, at this point, I have to refresh my memory again, but what the hell.

Birds of Prey: Between Dark & Dawn collects issues 69-75. Another of my purchases resulting from Pops's glowing recommendations, this is Gail Simone writing with Ed Benes, Ron Adrian, Jim Fern, Eduardo Barreto, and Eric Battle on pencils. Perhaps it's a product of how well Simone's writing carries the story, but the changes in penciller are largely unnoticeable. The style remains consistent throughout.
At this point in the story the Birds of Prey are Oracle, of course, Huntress, Vixen and Black Canary. The opening arc is about Vixen and Huntress infiltrating a cult that appears to only attract teens and young adults. They're on the radar because several of the cultists, children of wealthy and powerful people,recently have commmitted suicide while dressed as de 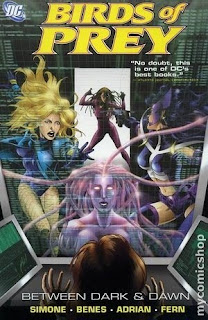 ad superheroes. In fact Vixen is already in the group, but Oracle has lost contact. Huntress is sent in and almost loses her own identity, too, as it turns out the leader has some mind control abilities. He, in turn, is being controlled by Brainiac. Refreshingly, the religion of this cult is superheroes, not the usual take on misguided Christianity.
The cult has a bunch of super powered sorts in the basement, under the control of Brainiac, via the cult. Other than Plasmus and Geo-Force, I don't really know most of them. The captured metas are set on Vixen and Huntress while Black Canary is back in Gotham trying to prevent more kids from killing themselves and Oracle is being taken over by Brainiac. There's a fittingly epic struggle to overcome the odds for Vixen and Huntress, while Black Canary helps Oracle defeat Brainiac's attempt to take over her mind and build himself a new body, as he appears to be stuck in the ether at the time.
It's the peronalities and the characterization that are most fun and make the book worth the reading. The art falls into the category of not being distracting, mostly. It's clean and all, but the unrealistic body proportions of the four protaganists is sometimes a contradiction to the strength of character brought to them in the writing. It's like we're trying to have paragons of sexual objectification while imbuing them with intelligence and individual personality. I can't decide if it's trying to have your cake and eat it too or a clever play against type. Maybe it's both.
While the characterizations are strong in this opening arc, they're somewhat subsumed to the story. In the last two issues collected there are just one and done stories that focus on a particular character. In the first, Black Canary, with the assistance of Huntress, sets up a one on one confrontation in a cage sort of situation with a guy called Savant. Savant's now working with the Birds of Prey but had previously fought them and abused Black Canary badly. The fight itself isn't really the centerpiece as much as how Black Canary arranges it and how she ends it without crossing her own moral line while still not forgiving Savant, despite his apology. The lead to the arrangement of the fight is particularly amusing with Black Canary and Huntress infiltrating a meeting of henchmen, muscle and molls who have been abused by their super villain employers. Seems they're trying to unionize.
The last issue is post some cross catastrophic even in the Bat titles in which Oracles's tower has been blown to bits. The Birds of Prey are looking to re-locate from Gotham to another city. Before they go, though, Huntress, Black Canary and Oracle do a mission in which Oracle is the bait. She gets to kick some ass from her wheelchair, which is cool. The last part is most interesting, though. Lady Blackhawk is apparently joining the team. Her back story is laid out and the prejudices of her day are set forth, but she doesn't hold onto them with any bitterness, instead seizing her curent opportunities. It's less than half the issue, but her story is told so well and so succintly, it almost pushed from my mind the Oracle kicking ass from her wheelchair part.
This was the first, and so far only, Birds of Prey I've read, so I was coming into the middle of things, but it was so well constructed that I didn't have any trouble getting right into it.
I've been reading Simone's Secret Six since it started. This isn't as good as that, in my opinion, but it's not far off.
Posted by Thomm at Sunday, January 10, 2010