What I’m Getting Wednesday January 6

So after taking perhaps my longest break from doing posts for the blog, I’m back and ready to start a New Year. I won’t say I’m refreshed 100% as my real world job is still too darn busy, but it was a nice break. I got to see both of my daughters and their fiancées. As I have stated before Gwen is now engaged and my other daughter Jamie got engaged earlier in 2009 and is getting married in August to a great guy named Dallas. It was nice to see both couples and it makes me feel a little older realizing that at 29 I’m having two daughters who are making wedding plans.

Okay back to comics and what is coming out this week. January is DC’s skip month as they elected to take a break with Blackest Night #7 to give Ivan Reis a chance to keep up with the workload. I will never understand why almost no major series ever gives the artist enough lead time, but at least this should ensure that Ivan is able to do all the pencils on all the issues.

To keep us warm during the long cold winter month in January (at least here in Maryland) DC has given us a bunch of old cancelled titles that have been brought back to life for one issue. I thought it was a fun idea and I’m curious to see what these books will bring. I’m sure some will be great, some will be good solid fun and some will be what were they thinking. This week we get Suicide Squad #67 which was a natural and one I thought was an odd choice with Weird Western Tales #71. To round out the Blackest Night books we also get Blackest Night Wonder Woman #2 (of 3). The add on mini-series have been highly entertaining and to date are not mandatory to understanding the main story at all. Also they avoid forcing Blackest Night from interrupting the flow of the regular series.

It is a big week for books published by DC that are not under the DCU banner with Authority #18 leading the pack. Both Authority and Wildcats are being brought together and then split apart as each group tries to see if they can solve the problems of the world. It is maintaining the continuity from what has gone before but trying to stir the pot once again. While not a best book, these series have been entertaining. From Vertigo we have House of Mystery #21, Cinderella from Fabletown with Love #3 (of 6), the wonderful new series Sweet Tooth #5 and the newest crime novel from Vertigo The Chill. DC’s describes it this way “It's summer in New York, but a "chill" has settled over the city – a serial killer is on the loose, and the ritualized murders are becoming increasingly sadistic. The NYPD and the FBI have a suspect: a gorgeous young woman named Arlana. The only problem is that every witness provides a different description of her. None of it makes any sense to anyone except Martin Cleary, a beaten-down Irish cop from Boston with a whopper of a secret in his past – and a past that may go back a century or two.” This sounds very cool to me and I’m looking forward to it. Rounding out the non-DCU books is the last issue of The Mighty #12, a very good series for the most part and well worth your time to pick up in the inevitable trade.

The Batman and Superman corners are lightly represented with Batman Confidential #40, Red Robin #8 and Superman New World of Krypton #11 (of 12). With all the announcements from DC I think we can expect that the Superman corner, which has been good stuff but not dynamic is about to heat up. It’s about time.

Rounding out my DC books this week we have Doom Patrol #6, Great Ten #3 (of 10), Jonah Hex #51, JSA All Stars #2 and Warlord #10. I had given up on Warlord, but I like Mike Grell’s work and it appears that he is drawing the book again as it probably heads back into cancellation.

Marvel has a small week for with only Seige #1 (of 4), Marvel Boy Uranian #1 (of 3), Spider-Man Noir Eyes Without a Face #2 (of 4) and Timely Annuals 70th Anniversary Collection HC. Three of the books have my interest with Seige hopefully being the end of Dark Reign. If this is leading into another mini-series I will be ticked off as this book is one of the reasons JMS left Thor. We also have Marvel Boy Uranian #1 and it makes me laugh as Agents of Atlas are everywhere now that their own series got cancelled. Since I love that group seeing them in Hercules, Thunderbolts and a couple of mini-series is great. Who needs a regular series to follow them when Jeff Parker is guiding their destiny in various places. It is a little harder to follow, but worth the effort. Finally the Timely Annuals was a great project and I’m glad to add this material to my bookcase.

The other category is dominated by two releases in my mind, although all are good books. Stumptown #2 is a book that I have been highly anticipating. I have put this book up into the Scalped and Criminal class of great crime noir work and hope to see #2 continue the excellence that we saw in the first issue. Next up is BPRD King of Fear #1 (of 5). This series is advertised as the one that is bringing the main story line that has been ongoing since the series started to a conclusion. BPRD has been as good and at times the better then Hellboy in the Mignolverse. 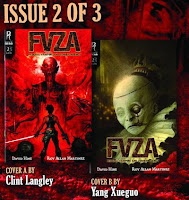 Now my high praise and excitement for those books should not diminish the other great indies coming out this week with Echo #18, Gigantic #5 (of 5) (finally), FVZA #2 (of 3) – the first issue was very cool, Grimjack The Manx Cat #6 (of 6), Proof #25 and Atom Eve Rex Plode #3 (of 3).
Looks to be a solid week to begin 2010 and hopefully portends a good year to come.
A quick note the post for tomorrow will not be a Best and Worst as last week was a skip week for all intents and purposes.
Posted by Jim at Monday, January 04, 2010