Jim: So I have to say that I’m enjoying the switch to highlighting IDW. No slam against Image, just nice to see a company like IDW thriving so well. They rely heavy on the license work, but then produce other great work to go along with it. Personally I’m thankful for the hard cover Bloom County stuff and hope they do the series all the way to the Opus Sunday strip.
Lee: I got the Bloom County book over Christmas and loved it. And, having peeked at the Image previews… we sooo made the right decision. On to the books. 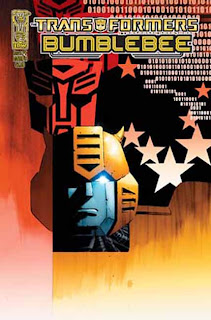 TRANSFORMERS: BUMBLEBEE #4
Written by Zander Cannon, art by Chee, covers by Guido Guidi and Chee.
When BUMBLEBEE has a change of heart and goes back to help a little girl whom he had used to discover her father's secrets, he finds himself pursued by the terrifying and unstoppable SKYWARP! BUMBLEBEE's big adventure as leader of the AUTOBOTS comes to an explosive and thrilling conclusion! 32 pages, $3.99. 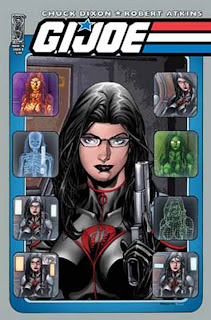 G.I. JOE #16
Written by Chuck Dixon, art by Robert Atkins, covers by David Williams and Atkins.
The Baroness is having a really bad day at the top of the world. The M.A.S.S. Device is malfunctioning. Destro's causing problems. Cobra Commander is demanding results. And to add to her troubles, a hit team of master snipers has her in the crosshairs. Not a lot of job security in COBRA. 32 pages, $3.99.
Jim: Now personally I ignore all the Transformers and most of the GI Joe stuff as these toys were well after my day as a kid and none of the movies have grabbed my interest. I picked these books for a couple of reasons. First, to show how strong the license material must be to support doing as many titles as they do and second that the talent involved is so strong. Both Zander Cannon, known for his Top Ten work, and Chuck Dixon are writers who always produce high quality and entertaining material. Not to forget, Chee is a very good artist and did a lot of work for Boom Studios.
Lee: I’ve ignored these titles but with the likes of Cannon and Chee on board, it’s getting harder and harder to not be interested. And, a true sign of IDW’s growing strength is their ability to hire proven talent. 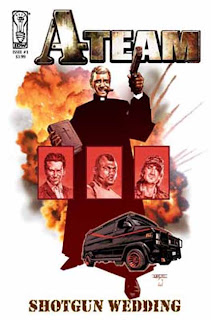 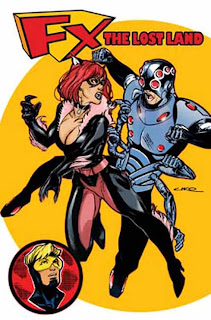 FX 2: THE LOST LAND #1
Written by Wayne Osborne, art by Uko Smith, covers by Smith and Mike Ploog.
Picking up where the last minseries ended, Wayne Osborne and new artist Uko Smith begin a six-issue miniseries that will take FX and the gang on an adventure to the center of the Earth and then beyond. But first, our heroes must confront the mysterious Arachnoid. Is he friend or foe? 32 pages, $3.99.
Jim: This is a pass for me, but I heard an ugly rumor that this book was only being published as the writer was paying for the art and paying to have it published. If true I would say hats off to him for putting his money where his heart must be with this story. If not true, a series that was a miss for me when I read FX 1.
Lee: That’s no rumor. That’s completely true. And good for him. He’s got enough money to live the dream which is more than me. And, there’s nothing wrong with paying for the art. It’s better than most of the small indie publishers who pay (sometimes) after the work is on the stands. 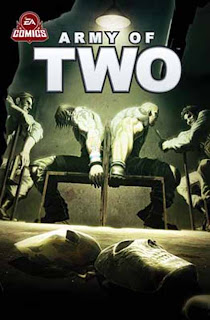 ARMY OF TWO #3
Written by Peter Milligan, art by Dexter Soy, covers by Chester Ocampo.
"Across the Border: Part 3." Tyson Rios and Elliot Salem have been framed for smuggling cocaine. These tough soldiers might have faced just about every danger in the world but will it prepare them for the hell that waits in the Mexican Jail, where they must fight for their lives against corrupt guards as well as the sadistic criminals locked in with them? Meanwhile, Jaime tightens his bloodthirsty grip on the local underworld. 32 pages, $3.99.
Jim: Somehow I missed this book before which is odd because I usually check out Peter Milligan’s new work for an issue or two. This story sounds very un-Milligan like, which is intriguing.
Lee: This does sound very un-Milligan like but I’m interested to see it. Then again Mexican prison references remind me of other famous by-lines.. “Jimmy, have you ever been in a... in a Turkish prison?” 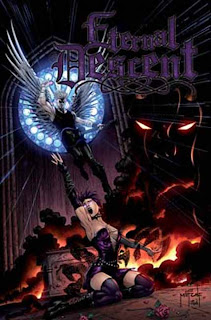 ETERNAL DESCENT #1
Written by Llexi Leon, art and cover by Jason Metcalf.
Welcome to a city where lost souls lurk in every shadow and darkness veils sinister designs, where heavy metal could be the key to salvation...or the gateway to destruction. A fallen hero, a twisted demon, one gorgeous succubus, and an army of chart-topping guitar heroes: the pieces are in place. The Descent begins. Written by Llexi Leon and illustrated by Jason Metcalf. Incentive Cover by Syzmond Kudranski & Svee Wheeler. Created in conjunction with ESP Guitars and Marshall Amplification. 32 pages, $3.99.
Lee: Ok, now I’ve just about seen it all. It was one thing when every new comic was tied into a video game but guitars? Seriously, this book is created in conjunction with ESP Guitars and Marshall Amplification. What exact interest does a guitar manufacturer have with comic books???? I’m sorry but it makes no sense.
Jim: Yet you picked it, but I agree, it is very odd. 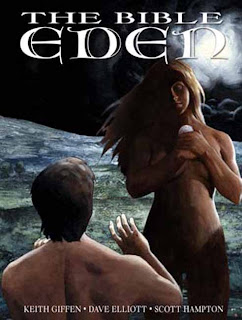 THE BIBLE: EDEN
Written by Keith Giffen, Dave Elliott, art and cover by Scott Hampton.
With Dave Elliott and Keith Giffen scripting, award-winning creator Scott Hampton produced this beautifully painted, visually stunning adaptation of the original tale of innocence, temptation and lust for the pages of Penthouse magazine. Collected here in TPB form for the first time, The Bible: Eden brings to vivid full-color life one of the world's classic stories. This TPB features a never-before-seen 8-page bonus tale of Daniel by Hampton, too! 112 pages, $17.99.
Lee: Now this is certainly one of the feel good stories of the IDW previews. I’m not the most God fearing of sorts but I do think that it’s good to variety in the publishing market. And, a collection of bible stories originally published in PENTHOUSE… WHOA DOGGIE!!!! What the??? Penthouse does Bible stories??? Uuummm, I mean, I knew that. I’ve read many of the articles and stories associated with the Bible in Penthouse and not just stared at the pictures.
Jim: I have the feeling that this story of Adam and Eve will get down into the nitty gritty of boy meets girl. Not sure this is an Adam and Eve story that was ever read in church as I ‘m sure Penthouse was shooting for a different audience. Odd I don’t remember the articles on the bible in Penthouse that Lee refers too.
Lee: Maybe you and I were reading different Penthouse books. 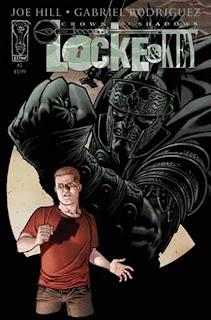 LOCKE & KEY: CROWN OF SHADOWS #5
Written by Joe Hill, art and cover by Gabriel Rodriguez.
Written byChapter 5: Light of Day. Four words: "Giants hitting each other." Don't miss the most smash-tastic fight issue of the year! 32 pages, $3.99.
Jim: Without a doubt one of the top ten series on the stands. The characters are so real and the art just matches a great story.
Lee: Ok. Sounds good to me. Everyone out there go buy a copy! Or, since this is the 5th issue and not the best jumping on point, wait for the trade like me. WAIT FOR THE TRADE PEOPLE AND BUY THAT!.... dammit! 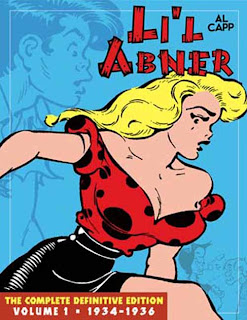 L'IL ABNER, VOL. 1
Written, art and cover by Al Capp.
Volume 1 of The Complete L'il Abner contains Al Capp's comedy masterpiece from 1934-1936, including full-color Sunday pages never before collected in book form. Li'l Abner moves to New York to live with his rich aunt and has to dodge both kidnappers and grasping socialites! Then it's a classic case of mistaken identity when Li'l Abner's evil twin, the ruthless criminal Gat Garson, comes to town. 288 pages, $49.99.
Lee: I really, really love that IDW is reprinting classic American strips. Between Dick Tracy, Terry & the Pirates, and now this, these are excellent, excellent books. Al Capp’s art is fantastic, but my only concern is the material. I’m sure it will be funny, but Capp loaded the strips with topical references. The chances of me understanding references to, or recognizing, famous people of the 30’s is pretty slim.
Jim: I never liked little Abner when it was in the Sunday papers when I was a kid and that was long after Al Capp had left the strip. I think this is a strip that has aged too much to be of historical interest to anyone. I do appreciate that IDW has jumped into publishing this type of material and will support strips that I love. 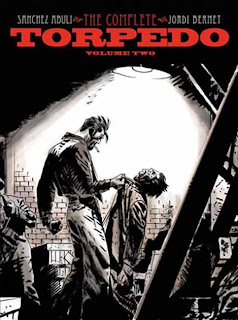 TORPEDO VOL. 2
Written by Enrique Abuli, art and cover by Jodi Bernet.
The continued adventures of Luca Torelli, a cold-hearted gangster in the 1930s, and those in his merciless orbit. Abuli portrays the characters with humor and poignancy, and Jimmy Palmiotti's translations provide a true sense of New York in the 1930s. Jordi Bernet's art, of course, is lovely, but Torpedo is Bernet's masterpiece‹the closest the graphic novel medium has ever come to The Godfather. 160 pages, black and white, $24.99.
Jim: Okay I have been sold on this material via Lee, but what the heck happened to Volume 1 which was suppose to be out months ago!
Lee: Yeah, where is the first book???? I’ll get this too but I really want the first one… well first.

Jim: What I found interesting is that I noticed that IDW is working with EA comics and ComicMix and is publishing their material. It reminds me of the old days when a publisher was just the end packager of various studios creating books. It is a good model, but each publisher has to be careful with what they publish or they will ruin their brand name. Image has damaged their reputation by publishing a lot of series that never get finished. It makes the average fan less welling to gamble on issue #1 if he is unsure if issue #2 will ever come out.
Lee: Sorry, I was thinking about Bible stories. Ummmm Bible stories. Oh yeah, conclusion… what Jim said.
Posted by Jim at Thursday, January 07, 2010