Jim: DC has some nice offerings that include the Atomic Knights. DC has some many quirky features from the fifties and the sixties that I’m glad to see this stuff see the light of day. Next up the Star Rovers or Space Cabbie! Maybe we can get Rex the Wonder Dog as Lee showed me just how much that damn dog could do and it was amazing.
Lee: DC always has solid offering on monthly books but I have to question the Atomic Knights hc. Yeah, DC has lots of quirky stuff but a lot of it’s bad too. It might sell to you and I but it’s a really tough sell to Gwen’s generation.
Gwen: It's true, I have little to no interest in Atomic Knights. 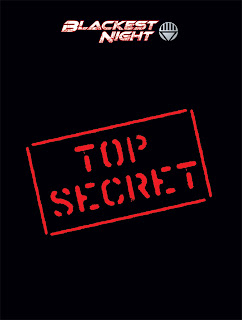 BLACKEST NIGHT #8
On sale MARCH 31 • 8 of 8 • 40 pg, FC, $3.99 US
Written by GEOFF JOHNS
Art and cover by IVAN REIS, OCLAIR ALBERT & JOE PRADO
The extra-sized conclusion to the most talked-about event in comics is here, and the results will change the course of the DC Universe for years to come. Earth has become the final battleground for life versus death, but how will our heroes fight back against the darkness of sentient space itself? And what does the future hold for Green Lantern, The Flash and the rest of the world’s greatest heroes and villains? Find out here as the stage is set for the next epic era of DC Comics!
Jim: I know DC has to make all of this stuff secret to keep it exciting for fans and I have been enjoying this mega event, but I never believe the hype about changing stuff forever until it happens and it happens very, very rarely.
Lee: It’s true that change is never lasting but when you have 40+ years of comic reading like you do, then there’s gotta be a certain amount of “been there, done that.” The series was a huge success and should launch several new series in the coming months.
Gwen: I'll be interested to see how it all plays out. I'm just happy the Geoff Johns brought Kyle back as until then Mr. Johns was dead to me =/ Kyle has been my favorite GL for a long time and I'm glad to see he wasn't shunted to the sidelines. 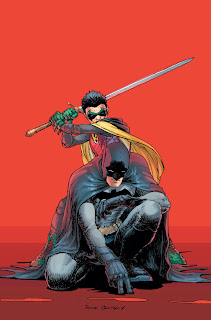 BATMAN AND ROBIN #10
On sale MARCH 10 • 32 pg, FC, $2.99 US
Written by GRANT MORRISON
Art by ANDY CLARKE & SCOTT HANNA
Cover by FRANK QUITELY
Art sensation Andy Clarke (R.E.B.E.L.S., BATMAN CONFIDENTIAL) joins writer Grant Morrison for an exciting three-issue arc titled “Batman vs. Robin”! Why would Talia al Ghul manipulate her son Damian into taking action against Batman? Will Damian do as Mother says…or stay loyal to Dick Grayson? Plus, more on the Domino Killer, Oberon Sexton, and the menace of El Penitente’s drug cartel! Is this already the end for the new Dynamic Duo?
Jim: Robin versus Batman, are you kidding me. This stuff is so great that I can only pray that DC leaves Dick and Damian as the Dynamic Duo for at least five years. I love Batman more then ever and I was a huge fan before the changing of the guard.
Lee: I didn’t think Morrison could do it but this is certainly one of the better Batman runs in recent memory.
Gwen: Even I like this run and I'm not a Morrison fan. 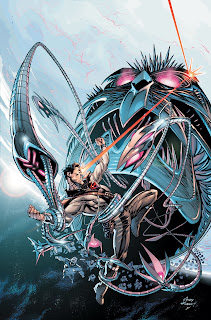 SUPERMAN: LAST STAND OF NEW KRYPTON #1
On sale MARCH 10 • 1 of 3, 32 pg, FC, $2.99 US
Written by JAMES ROBINSON & STERLING GATES
Art by PETE WOODS
Cover by ANDY KUBERT
The new Superman crossover event “Brainiac & The Legion of Super-Heroes” begins here, in this first issue of a 3-part miniseries! It’s New Krypton’s worst nightmare as Brainiac attacks the planet, determined to recapture the city of Kandor! But General Zod has been waiting for this moment since Brainiac first attacked Old Krypton – he has a plan to save his people, but at the cost of Earth and the future as we know it! So it’s up to Superman, Supergirl, Superboy and the Legion of Super-Heroes to stop the two madmen before they destroy everything!
Jim: So the big 2010 Superman event gets started in earnest with this book I guess. I’m not that excited about this event yet, but I appreciate that it is more along the lines of a mini-event and is not showing any signs of massive spillage into other books yet!
Lee: Mini-events are the wave of the future. Let’s just hope this one is good.
Gwen: Anything with the Legion of Superheroes is good in my book :) 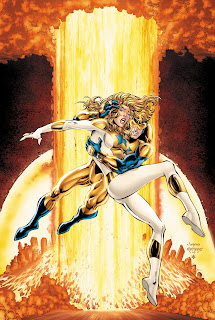 BOOSTER GOLD #30
On sale MARCH 17 • 32 pg, FC, $2.99 US
Written by DAN JURGENS
Art and cover by DAN JURGENS & NORM RAPMUND
When Booster Gold rescues his sister from the timestream – saving her from imminent death – he soon realizes that the sister he saved is not the same girl he remembers. Will the two be reunited as Booster Gold and Goldstar – or will Michele disappear into the timestream forever? And what will become of Rip Hunter? Be here to find out!
DOOM PATROL #8
On sale MARCH 10 • 32 pg, FC, $2.99 US
Written by KEITH GIFFEN
Art by MATTHEW CLARK
Cover by JUSTINIANO
A pandimensional wrecking crew has come to Oolong Island looking for something specific, and the Doom Patrol had better find it while there’s still an island left!
Jim: I picked these two books as it appears DC has abandoned the back up feature idea on many of their books and just gone back to making the books $3. While I enjoyed some of the back up series I prefer a book to live or die on its own merits.
Lee: Well, that didn’t last long. Just about as long as the 100 page giants in the 70’s.
Gwen: I like the backup stories. I miss Blue Beetle as a monthly series though. It was kind of nice to get a comic and a half in some of the books. 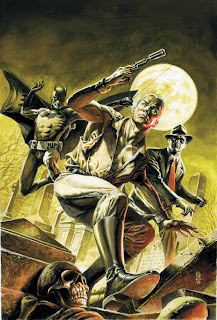 FIRST WAVE #1
On sale MARCH 3 • 1 of 6 • 40 pg, FC, $3.99 US
Written by BRIAN AZZARELLO
Art by RAGS MORALES
Cover by J.G. JONES
1:10 Variant cover by NEAL ADAMS
DC’s shocking new pulp universe is finally unveiled! In the shadows of the War, the roots of the Golden Tree cabal grew deep into the heart of a fallen world… and the leaders at the heart of this secret organization see no place in their utopia for heroism. Doc Savage, struggling with the loss of his father, has been blind to their advance – until now. Central City’s mysterious Spirit has caught wind of their plans as well. But whose side have the Blackhawks chosen? What is the Red Right Hand? And where is the Batman? Eisner Award winner Brian Azzarello (100 BULLETS, JOKER) and superstar Rags Morales (IDENTITY CRISIS) craft a DC universe like you’ve never seen before! It’s a world with no supermen, only mortal men… Death can come at any moment, and adventure can still be found at every corner of the map! Will Doc Savage be the first to lead the coming world or the last to be crushed under its heel?
Jim: I loved the Doc Savage / Batman Special that launched the First Wave and I’m really looking forward to this book. I just wish they would give us the Neal Adams cover and forgot all this variant crap.
Lee: I wonder how this will compare to Marvel’s Noir Universe. They seem to be very similar in nature.
Gwen: I enjoyed the special and I'm looking forward to see how this universe plays out. 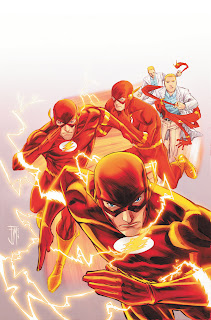 THE FLASH: SECRET FILES AND ORIGINS 2010 #1
On sale MARCH 24 • 48 pg, FC, $3.99 US
Written by GEOFF JOHNS
Art by SCOTT KOLINS, FRANCIS MANAPUL & OTHERS
Cover by FRANCIS MANAPUL
Flash Facts! In the aftermath of BLACKEST NIGHT and THE FLASH: REBIRTH comes the beginning of a new era for Barry Allen and the deadly Rogues! As Barry readjusts to life again, strange happenings explode across Central City that will lead to one of the most bizarre murder mysteries Barry will ever face in the upcoming THE FLASH #1! Plus, don’t miss Wally West, Kid Flash, Gorilla Grodd and a cold case that will send The Flash down a path unlike any other. Run – don’t walk – to pick it up!
Jim: For the fastest man alive it is taking a really long time to get his series up and running. Sorry the puns just write themselves, but really how can you be excited about Barry’s return when we have seen more of him in Blackest Night then we have in the actual series chronicling his Rebirth.
Lee: I’m sorry but I really don’t care about Barry Allen Flash anymore. I wish he would go away.
Gwen: I wish they would stop trying to relaunch old, dead characters. Barry was a great character and had a great death. Death just loses meaning when characters come back all the time. 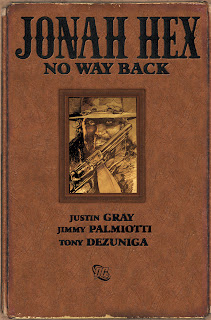 JONAH HEX: NO WAY BACK HC
On sale MAY 5 • 136 pg, FC, $19.99 US
Written by JUSTIN GRAY & JIMMY PALMIOTTI
Art and cover by TONY DEZUNIGA
Discover how Jonah Hex’s rough family life transformed him into the justice-thirsty vigilante he became. Legendary Hex artist Tony DeZuniga returns to illustrate a new, archetypal epic written by the acclaimed HEX team of Jimmy Palmiotti and Justin Gray. This heartbreaking, brutal original graphic novel is set against the unforgiving landscape of the Wild West and delves into Hex’s painful past, revealing for the first time how his difficult upbringing made him that era’s most feared bounty hunter. Along the way, Hex must come to terms with the death of a loved one, long thought lost, battle El Papagayo and his gang of bandits, and attempt to make peace with his own past.
Jim: Jonah Hex with Tony DeZungia doing the art, SOLD! Tony was the artist who defined the character back during Jonah’s first comic book series. As a side note, I wonder if DC will ever republish the unfortunate series when Jonah was sent into the far future and was a futuristic bad a**.
Lee: I’m sold on DeZungia art too but Gray and Palmiotti’s stories are way to hit/miss for me to invest. As for the Hex series (that was the title)… it was awful. Really, truly awful so I doubt we’ll see it for a long, long time. Correction, I hope we don’t see it for a long, long time.
Gwen: I never got into the Jonah Hex stuff.