What I’m Getting Wednesday January 13

I’m fishing to find a new columnist to give us a Saturday post. After working on the blog for so long I think it can always benefit from different voices. Thomm was our latest addition and I think his Sunday columns have been great. Gwen maybe coming back and taking over Friday and I have been trying to recruit my other daughter Jamie and/or James McGuinn to join us. I will entertain other people if anyone has a mind to do it. If we are able to do that it would also allow for me and Lee to do a few additional posts here and there and give those posts a little more polish before publishing. I like the idea of having more then seven posts a week, but one new post a day minimum has been my goal since day one and I don’t believe we have missed a day. 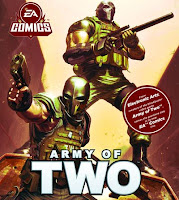 This week I have to lead off with the independents. Lee and I have switched to giving IDW more focus and therefore I have started to pay attention a little more to what they are publishing. Now I’m not a fan of video games made into comics and EA games and IDW have a deal to produce material so Army of Two #1 would normally be a skip, but Peter Milligan is the writer and I have to try that out. Milligan writing this type of book is not a natural fit in my mind but a skilled writer can do different genres. Ghoul #2 is also coming out this week from IDW and I love the Steve Niles / Bernie Wrightson combination. The first issue was great as we have an intelligent hulking type creature and a LA detective teamed up to solve a mystery and for the Ghoul a chance to kill some demons.

Next up from IDW is a book I have been anxiously awaiting and we are finally getting Torpedo Volume 1 HC, which is collecting the series that became the most famous work of Spanish artist Jordi Bernet. I have heard nothing but praise for this gangster series and I’m looking forward to IDW’s English collection of this series. Last and far from least is Weekly World News #1. I loved this concept so much that it seems like a natural and I’m now surprised why no one ever thought of it before. Weekly World News made stories up, plain and simple and they were always bluntly honest about it, but they were so far fetched and ridiculous that it became entertainment in and of itself. Now writer Chris Ryall is bringing us the stories as graphic fiction in what looks to be a great mini-series. 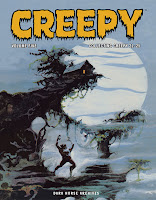 To round out the indies we have Creepy Archives Volume 5 and I will never understand why reprint volumes publishing schedules get so messed up as I believe this was due months ago. Farscape Dargo’s Quest #2 (of 4), although I know Dargo is dead in current continuity I’m really enjoying learning of his solo adventures. The last book from the other category is Absolution #6 (of 6); Christos Gage great examination of a super hero doing what he believes is right regardless of its legality. If you missed this, get the trade down the road as the ethics apply whether someone is super or not.

Marvel is a lighter week with Strange #3 (of 4), Marvel Projects #5 (of 8), Iron Man #22, Realm of Kings Imperial Guard #3 (of 5) and the very dark and twisted PunisherMax #3. Jason Aaron is focusing on creating a Wilson Fisk for the Max Universe and he is allowing him to be as twisted nasty and horrible as you can imagine and then take it down one or two steps further. This hardcore and brutal man needs to go down and I just hope Jason does not fall too in love with his creation to allow it to die, as ultimately Frank Castle cannot let this man stand and be true to what he is.

DC is still dealing with the no Blackest Night issue coming out in January, which I think will kill their percentage of the market in January, but we have Catwoman #83, Power of Shazam #48 and Secret Six #17 all being Blackest Night tie-ins. Catwoman should be a natural with her dealing with the original Black Mask, who she killed, coming back as a Black Lantern. Secret Six is always a good book and Simone smartly made this part of the Suicide Squad book from last week.

We also have Action Comics #885, Adventure Comics #6, Booster Gold #28 (always on the verge of being canceled by me), The Shield #5 (which is well done, but I fear it will not last long), Batgirl #6, Batman #695 (oddly the Bat book I probably care least about right now), Rebels #12 and Green Arrow Black Canary #28. Batman has fallen in stature because Tony Daniel is over reaching in his writing and even his art at times. I feel Tony is

a talented creator but needs some help to get his ideas on the page better. This plot has too many elements and needs a better writer to keep it all straight. Also Tony on occasion has some page designs that appear as if he is trying to do something a little different but at times impact a smooth flow of the story. Over time I can see Tony becoming a big star in the comic world with a strong editorial hand helping him. I keep thinking this industry misses people like Archie Goodwin who helped a lot of people become better story tellers. Green Arrow / Black Canary are back on my list as I see that JT Krul is coming onboard soon with a big story involving GA, Red Arrow & the JLA. I sometimes like to jump back into a title early just to get into the rhythm of a book again.

Vertigo has one offering that I’m getting this week and it is Daytripper #2 (of 10). The first issue was great and brothers Gabriel Ba and Fabio Moon have grabbed my interest. The story focuses on an obituary writer, Brás de Oliva Domingos, and his relationship with friends, family and life. The first issue ended with a desperate man holding a gun at Brás and then we pulled back and heard the gunshot. I assume our main character is still alive, but who knows in a Vertigo book. Pick this up as it feels like it could be one hell of a ride.

It some ways it appears like 2010 is starting off slowly, but I also hope the lighter lists are a reflection of my idea of adding less mini-series and therefore the attrition in my list is a little more organic in nature. Of course Lee and I have upped our focus on IDW and it has caused me to want to try out more of their stuff then ever before.
Posted by Jim at Monday, January 11, 2010