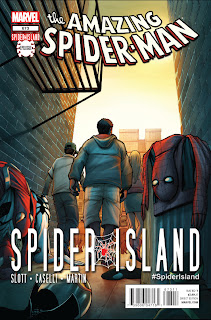 Finishing well is better than starting well and it can even help all the problems along the way to be forgotten or at least they become less important. (It reminds me of Ezekiel 18:21-23.) Spider-Island had both its strong points and it’s weak points, but for the most part it ended well. This good vibe started toward the end of last issue, where Peter saves the city using millions of tiny Octobots to cure everyone from their monstrously mutated spider forms (a VERY weak point). Our friend Shawn expounded on this in his review for our local comic shop and I agree with him that this positive turnaround can be attributed primarily to one person: Mary Jane.

Let’s face it. We all want Peter and Mary Jane to get back together. There’s a reason why the virginal Gwen Stacy (I’m IGNORING JMS’ Sins Past character assassinating storyline) was killed off, instead of MJ. Mary Jane and Peter have so much more chemistry and MJ was always a much more complex and interesting character. One of my favorite issues of ASM (#259 by the great Tom DeFalco and Ron Frenz) featured the aftermath of her bombshell that she knew Peter was Spider-Man and where we learn more of her personal backstory. This of course was the beginning of their deeper friendship, which ultimately led to their marriage. (I’m beyond disgusted that Marvel took their loving lifelong commitment to one another and retconned it with “simple” cohabitation – NOT the same thing.) So seeing her back front and center in ASM is a great improvement and makes me hopeful for their future. 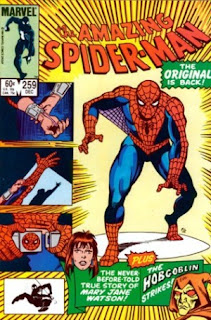 This issue ties up a lot of loose ends and basically resets the book for the upcoming 50th anniversary celebration [Spoilers Follow]. Damage Control is cleaning up the gigantic deceased Queen spider-creature (another weak point) and the city of New York is all waking up naked in the streets. The Jackal is still alive and plotting new schemes against Peter. Kaine has survived (looking better than ever and keeping the Big Time stealth suit) and off to launch his own Scarlet Spider series. Eddie Brock is no longer Anti-Venom (he was instrumental in curing everyone too). Aunt May has finally moved to Boston. Madame Web continues to predict dire warnings of loss for Peter. Peter cures MJ of her spider-powers before she grows six legs (she’s still having fun at this point and isn’t too eager to loose them yet.) Doctor Strange’s secret identity spell no longer works, because Peter partially revealed himself on the Internet. Oh, and one other important change which I’ll mention a little later…

The art in this issue by Stefano Caselli is exceptional and very polished with beautiful figure work. He has a very realistic take on Spider-Man’s costume. I like the way he draws the eye lenses and the little wrinkle on the back of his neck. It’s one of the best versions of Spidey’s costume since the Electric Company. The color art by Frank Martin is extraordinary too. There is so much going on in the color art these days that’s more than just filling in between the lines. The inks (or scanned pencils) are colored too. The sequence with Doctor Strange’s astral form is particularly awesome.

Slott’s script continues to have some humorous moments (one of the strong points of the whole arc). I also like the scene with the clean-up worker on the George Washington Bridge and the fact that the city now knows that Spider-Man is just a regular guy like them (who just happens to have super powers). The page with Robbie and Jonah was also great and a perfect in character moment, leading up to the outstanding ending with Peter, MJ and the Empire State Building (Check it out yourself. I’m not going to give everything away!).

Now that we’ve gone over the praiseworthy parts, it’s time to focus on the things that bothered me. As much as I enjoyed Peter’s saving the city moment, I continue to be disturbed by his arrogance and pride. Mark my words it’s going to come back on him someday. His response to Madame Web’s warning was particularly juvenile and over the top (more so than normal). I also was very unhappy with his treatment of Carlie.

That big important change I mentioned above is that their relationship is over. I know I should be overjoyed as this means the path back to life with MJ is now free and clear, but I thought the breakup scene was too quick and Peter was a royal JERK (more so than normal). Once human again, Carlie quickly surmised that Peter was Spider-Man (thanks to the nullification of Strange’s spell) and realized that yet another loved one had been lying to her. Having been hanging out with MJ, he totally forgot about Carlie (shows you how much he really “loved” her) and is totally surprised when he sees her in the apartment, not even noticing that she’s moving her things out. She calls him on his deception, makes him admit it, and declares that they’re finished as a couple. Even while she’s pouring her heart out, Peter is more concerned about how she found out than her feelings. He feigns some concern over her leaving, but you can tell it’s hollow. Even when he tells MJ about it, he doesn’t seem too broken up. That’s understandable on some level, because their relationship was contrived. There wasn’t any chemistry or need for them to be together – it was just a plot device, just another notch on his bed.

This is what really ticks me off. You get rid of the marriage, so Peter can be single. Presumably so he can have sex with lots of different women (Black Cat, Carlie, his old roommate after getting drunk, etc.), but you KNOW that he’s going to end up with MJ again. So, what’s the point?! How could he even think to be intimate with her without revealing his secret? Talk about disrespectful. Carlie nailed him when she said she’d shared everything with him and all he showed her was lies. (She had an interesting take that Peter is the “suit” and Spidey is the real person.) Even when they were planning on “doing it” the first time, it seemed so forced and artificial – passionless. Forget the fact that Carlie and Peter didn’t make a good couple, imagine if she were a real person. She was USED man! I have no sympathy at all for Peter in this. He was never that emotionally involved with Carlie, because he always maintained his (best) friendship with MJ! His “oh well – let’s move on” reaction to the breakup is proof of this.

It’ll never happen, but you know, I really, really hope Carlie is pregnant with Peter’s child. I’d like to see her deliberate over her hard choices and choose to have the baby. What will Peter do with his responsibilities then? You can’t just have the fun sex without the consequences. There needs to be some more follow-up on her…She shouldn’t just disappear from the book all of a sudden. Knowing Marvel, they’re more likely to turn her into a super villain and she’ll come back and kick Peter’s butt.

My favorite part of Spider-Island: The first two issues of the Cloak and Dagger mini-series.
Posted by Matthew at Saturday, November 05, 2011