Intellectually, I knew the Baltimore County Public Library had a selection of the glorified comic book known as a graphic novel, but I never got around to checking out what they had until recently. I had taken my daughter to the library to work on some research for a Language Arts (formerly known as English) assignment. About half of the selection at the Reisterstown branch is manga, which isn't my thing, but I still found a few things of interest.

Among those is Incognegro. I remember Vertigo's ads for the book and seeing it at Cards, Comics and Collectibles, but hadn't gone so far as to puchase it. This was a perfect opportunity to have a look at it. 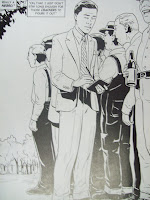 it appears to be the Jazz Age in Harlem), it tells the story of a writer for the New Holland Herald. The Herald is a black owned and operated 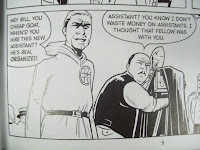 newspaper out of New York. The writer is Zane Pinchback, who writes under the name Incognegro because he looks white and can go around the south to expose lynchings. Not that he doesn't have some near misses of being caught and found out to be a black man masquerading as a white man in Jim Crow times.

When the story opens he's had enough of his undercover work and wants to just write a column for the paper. His editor sends him out on one last story as Incognegro, convincing him only because the accused who's looking at a lynching is Alonzo Pinchback, Zane's older twin brother who can't pass as white on his appearance. 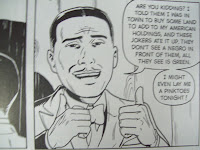 Zane's friend Carl, something of a hustler and dandy in Harlem, comes along, being able to pass as white as well.

Alonzo is accused of killing a white woman who was moonshining, though everyone in the community is pretty sure she was killed by some white guys to whom she owed substantial debts. That or some John, as she's also a local hooker. 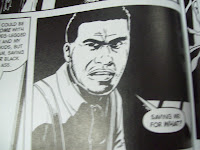 Turns out she was actually Alonzo's lover, and they were planning on making a big score on moonshine and getting out of town. 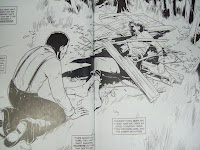 Much of the story is unsurprising if you have any knowledge of how things were under Jim Crow. Blacks are oppressed both by the law and vigilantes like the Klan. Lynchings are an exra-legal intimidation and celebratory event for many whites in the community. Guilt or innocence is of no consequence. Humiliation and intimidation are the modus operandi to keep whites in a superior position in society, though the majority of poor whites aren't able to recognize that the same system that oppresses blacks oppresses them as well, so that only a minority of whites enjoys any prosperity, let alone wealth.

Author Mat Johnson makes some twists and turns in the narrative 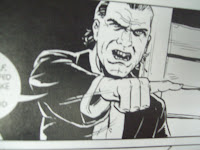 of his particular story. The victim isn't who she's thought to be at the beginning. There's a sect of mountain dwelling whites who are outright crazy, seeking to have themselves appointed the leaders for the coming black revolution they believe is coming, because blacks will revolt like Nat Turner and kill all the whites (except them), but need white people to lead them, so they're volunteering. All kinds of crazy, and a bit of a different take.

But the mystery in the story isn't all that deep. It's not hard to figure what happened and who's actually dead. The section with the crazy mountain clan doesn't advance the story at all and could easily have been removed. It's something of a gratuitous slap and the inbreeding of some white people. 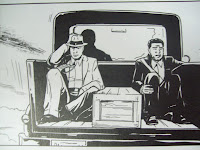 The tragic death of one of the players loses some of its tragedy when nothing is mentioned about the death shortly after it occurs, other than taking the body back to New York. The comeuppance of the Klan representative chasing Zane isn't surprising, and I'm not sure of its believability, either. The paranoia of the Klan is certainly believable, but the willingness of the citizenry, most of who wouldn't have been Klan, to be just as paranoid doesn't quite wash. 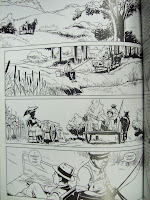 The art by Warren Pleece is black and white. It's a sparse style, yet quite beautiful. It's not aiming for literal realism. No photo referencing here. One of my favorite moments in the book is when Zane is riding in a wagon with a local black man who has helped him. Zane takes in the beauty of the nature around him, remembering that this land where he grew up is a beautiful land, not reflective of the oppression that governs it. Pleece does an excellent job of conveying the beauty which Zane perceives. 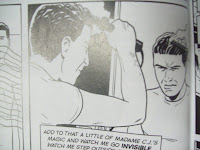 who could not, even within the same family. It's not often twin brothers, but it's been told. Of course, I have some personal interest because my own kids are both black and white, but to most people's perception, appear white. That's not much of a concern to them because they live in a community of black, white, Ukrainian, Kenyan, Uzbek, Indian, Pakistani, Gautemalan, Cuban, Honduran, Filipino, Jewish, and a host of other nationalities. Everyone's family is from somewhere and quite varied. Their sects tend to be based on personality and interest, such as dance for my daughter and video games for my son.

The book shows how much change there has been in the US since the '20s. Maryland wasn't so violently segregated as the deep south where this book is set, but it was segregated all the same. It makes me wonder about the choices for quotes about the book that appear on the cover. Walter Mosley and Paul Theroux's quotes are about the quality of the work. George Pelecanos talks about the times in which it's set, referring to it as a piece of tarnished America. All that's fine by me. I'd hardly disagree that the Jim Crow era was tarnished. 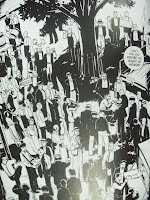 But then there's the quote from Cornel West, who talks about the book as probing the complex dynamics of white supremacy in America as though it's set in the present. Not that there isn't racism in 2011 America. It's just that it's not this racism. Of course, I'm familiar with Cornell West and his mission. I just wouldn't have chosen him for a jacket quote because it's disingenuous.

I recommend the book as good reading and an excellent exploration of a time and place in the US. It's not a stellar mystery. It is a star for its perspective on a story.
Posted by Thomm at Sunday, November 27, 2011