Lee: Now this is rarity, there isn’t much for me from IDW this month. Usually I love everything but it’s very light this month.
Thomm: I can do light. Of course, if you’re into the licensed stuff, IDW always has plenty of that. 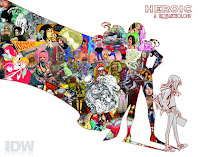 Womanthology Heroic HC
Annie Nocenti, Anya Martin, Barbara Kesel, Kimberly Komatsu, Gail Simone, Trina Robbins, Samantha Newark, and many more (w) Camille dErrico, Renae DeLiz, Ming Doyle, Colleen Doran, Fiona Staples, Stephanie Buscema, and more (a) various (c)
Womanthology is a large-scale anthology showcasing the works of women in comics. It is created entirely by over 140 women of all experience levels, from young girls who love to create comics all the way up to top industry professionals. All of the short stories will center around our theme for this volume; Heroic. There will also be features, such as Professional How-Tos, a Kids/Teens section showcasing their works and giving tips, as well as a section dedicated to some Iconic female comic creators of the past, such as Nell Brinkley, and much more. Profits of this book will go towards the Charities of GlobalGiving.org. $50.00
Lee: I think this is a great idea but wow-oh-wow is this expensive. At half this price I would have jumped at this if only to buy it for Girl. But at $50, I have to hesitate. I think it will be good but I am not sure I am going to make the investment.
Thomm: Sure seems like it’s being priced out of its intended market. It’s not like young girls interested in comics are noted for their deep pockets. That’s middle aged men, and it looks like it’s too much for even a spendthrift like you. By the way, “Womanthology”? Really? It’s not like the root is “Manthology”. It’s “anthology”, a word that comes from a Greek word meaning gathering of flowers. It has nothing to do with gender. Cutesy at the expense of sense.

There's more after the break... 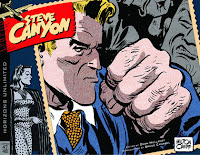 Steve Canyon Vol. 01: 1947-1948 HC
Milton Caniff (w & a & c)
Steve Canyon like you've never seen it before-reproduced directly from Milton Caniff's personal set of syndicate proofs! For the first time: the definitive edition of the Steve Canyon newspaper strip by Milton Caniff featuring every Sunday in color and the daily strips in their original, uncropped versions. Caniff quit Terry and the Pirates in 1946 to begin Steve Canyon and it became his biggest-selling work. Forever known as the Rembrandt of the Comic Strip, Caniff is at the absolute peak of his artistic prowess in these strips. Your passport is stamped for Adventure, Intrigue, and Danger on your expedition to exotic locales with your pilot, the one and only Steve Canyon! The Caniff women are also on display, as Steve Canyon Volume 1 features steely yet sexy Copper Calhoun; the beautiful schemer, Delta; that modern-day Mata Hari, Madame Lynx; Dr. Deen Wilderness, who is as capable as she is lovely; plus Captain Shark, Convoy, and the footloose Fancy. Edited and designed by Dean Mullaney, with historical essays by Bruce Canwell, Steve Canyon is presented in a matching hardcover set to the Library of American Comics's Eisner Award-winning Terry and the Pirates. $49.99
Lee: Ok, this is really expensive too but I know this will be good. Caniff was one of the masters of the adventure strip and this was one of the best. Forget what you read in today’s paper, or even the stuff you read as a kid. This is the original material the built a strip that would run for over 40 years!
Thomm: That’s a really big fist. I know it’s closer to the viewer than Steve’s head, but that’s a really big fist. Anyway, I’d have to read some of this before considering buying. I never have read any Steve Canyon, or maybe just a bit towards the end of its run. Reminds me a bit of the Spirit, but that’s probably just the names of the women.

Mark Twain: Tales of Mystery HC
Mark Twain (w) Menton3 (a & c)
Sherlock Holmes in America? Mark Twain a character in his own stories? Can it be true? True indeed, dear reader, as Mark Twain makes his mark on the mystery genre with this collection of short stories by the grand master himself. Including A Double Barreled Detective Story, Tom Sawyer, Detective, A Murder, a Mystery, and a Marriage, and The Stolen White Elephant, delight as Twain breaks convention and bends cherished characters to tell stories that are wholly his own. Illustrations provided by Menton3 (The Lovecraft Library, Classics Multilated, Monocyte). $16.99
Thomm: So these appear to be stories actually written by Mark Twain. I’ve read a lot of Twain and never heard of any of these, let alone Twain writing a story that included Sherlock Holmes. This may be the best thing to check out this month from IDW.
Lee: I'm not sure what to make of this but I'm always up for a good bit of historical fiction.  It's worth investigating at least.

Eternal Descent Vol. 2 #2 of 6
(W) Shaun McLaughlin (A/C) Jason Metcalf
The battle rages on at the center of the universe! As Loki schemes to pull the plug on the Music of the Spheres, Sirian and his friends-including Gus G.-make a final, desperate bid to save our reality. Can Loki be stopped, and at what cost?! Also features COBALT: Prescription Perception, Part 2. $3.99
Lee: Let’s end this on a high note… it’s some random dude fighting some random demon with… get this A FLAMING GUITAR! I can’t decide is this is super cool or super clichéd! It will look pretty on the stands, that’s for sure.
Thomm: Pretty’s not what came to my mind. James Hetfield, but not pretty. Does anyone still play those ‘70s looking guitars?

Lee: Well, that was certainly ‘eh’. The only one I really want is the Steve Canyon but that’s really expensive too. I might not be getting anything from IDW this month.
Thomm: Mark Twain is the most interesting thing for me. Steve Canyon’s probably good, too, but more money than I’ll spend, especially on something I haven’t read already to know if I’ll like it. Sure, it’s legendary, but that doesn’t mean I’ll like it. Stupid “Womanthology” title… Messing with my kef.
Posted by Lee at Tuesday, November 15, 2011