This has been an enormous catch up week for me. Not only have I had some extra time at my real job I have somehow managed to catch up on almost all of my new comic reading. So I’m not limiting myself to what came out last week but to some of the books I enjoyed the most that I read this week regardless of timing. Also I decided to review and comment on some stuff that is off the radar. 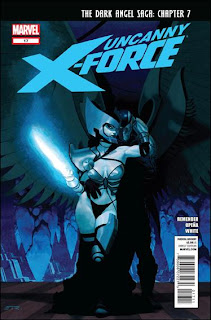 Rick Remender is writing one of the best comic books on the market with Uncanny X-Force and issue #17 is just another example. Jerome Opena on art and Dean White on colors seal the deal. Since the first issue this series has been basically one long story about Warren Worthington becoming the new Apocalpyse and the rest of the group’s battle to take him down. I have almost totally sworn off hard cover collections until I pare down what I have, but when they do the Omnibus on this baby, it will be one I will need to own. Often you can see a run on a comic coming together as a definitive or seminal run; like Scott Snyder did with Detective recently and here we have Remender giving us an X-saga for the ages. Not since Grant Morrison’s run on the X-Men has anything out of the X-verse had such power and dynamic story telling. It ties in a covert ops team with Apocalypse, the Age of Apocalypse and Fantomex’s world. Rick is using concepts created by previous writers and blending it together with various artists to create one of the best stories on the stands. I have no clue if everyone is getting out alive or not, but I know one thing, I’m here for the whole saga, which is set to conclude next issue. 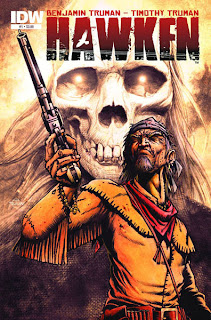 Hawken #1 is from IDW and is by Benjamin Truman and Timothy Truman. Tim is doing the art and I have always loved his work, which is proven by the two pages of artwork I own by him. It was even more enjoyable as I had the chance to actually buy the art from Tim himself. Tim is an amazing artist and one of the underappreciated talents in the industry. The book is black and white and actually color does not do Tim’s work any favors as his work looks beautiful in black and white. The story is by Tim and his son Benjamin and the script is Benjamin’s work. If you like hard violent westerns like Jonah Hex, then do not miss out on this book. We jump right into the middle of the story as Hawken rides into a small Mexican village being terrorized by gunman. He saves the town only to shoot the priest because the priest was who he was hunting. The only reason I have as much background on the characters as I do is from the tag line at the end that states Kitchell Hawken was scalped, tortured and left for dead and is not back looking for vengeance. I figured out from the story he was a man on a mission and since he sees ghosts of people he has killed before we know he is not the nicest guy in the world. All in all a very cool western tale that is as hard core in its violence and uncompromising in its nature as you could want. 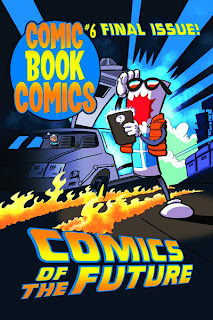 Comic Book Comics #6 (of 6) is once again just a wonderful presentation of the history of comic books. Fred Van Lente is the writer and researcher and Ryan Dunlavey provides all the pictures. If you have any interest in the background of comic you owe it to yourself to read this series and I’m sure a collected edition will be put together in short order. These are the same guys who gave us Action Philosophers which is required reading. What they are doing is giving us a rich history of comic books and presenting it in the medium that we love. It even mixes a little opinion piece in with the history, but presents it in such a way that the reader can draw their own conclusions. This book wraps up the series and takes us right up to today with the advent of digital comics finally coming into their own and leaves us with the question of what will come tomorrow. This material proves that learning can be fun. 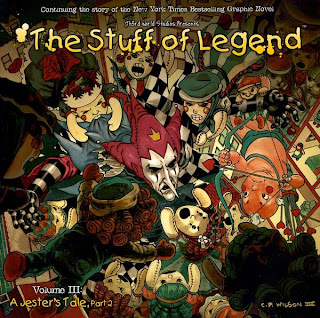 The Stuff of Legend Volume 3 – The Jester’s Tale #2 by Mike Raicht & Brian Smith, illustrated by Charles P. Wilson III was another excellent chapter in this saga. What I thought at one time was to be a short four or five issue mini-series is actually an epic story that is taking many twists and turns as a young boy’s toys try to save him from the bogey man in a world where the toys are real and children are considered the toys. Charles Paul Wilson III is a phenomenal artist and his work stand out even more in the muted colors that are just a notch above black and white. The story about the Jester and his quest to try and save the Indian Princess is interwoven with the boy and his friend trying to escape this land and the occasional checking in on out other characters. The erratic publishing schedule of this book actually caused my store to miss ordering this issue and would have not done so without my asking about the book. In fact I have had this issue for a few weeks and just got around to reading it. That is my major concern for this book that it could be forgotten by too many people and then the sales will deteriorate to the point that the story does not continue. Smaller publishers always face an uphill battle and your support actually matters to a company of this size. Check out this link for more on Stuff of Legend. I just have to try and keep an eye out for when the next issue is coming out. 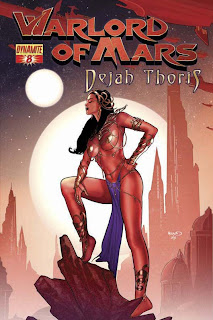 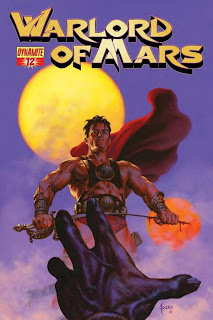 I read the Warlord of Mars #12 and Dejah Thoris #8 this week from Dynamite publishing. I don’t think I ever mention these books. I dropped the Marvel stuff because it was all about Disney’s movie on John Carter more than anything else, but this material has the ring of being written for the sheer love of the character. I get the feeling Avrid Nelson (writer) has read and loved these characters and is doing his level best to remain true to the work while adding some additional elements to flesh out the characters and their histories. Stephen Sadowski’s work looks great and I have missed seeing his work since his time back on the JSA book that Johns and Goyer wrote. The Dejah Thoris book, also by Avrid Nelson,  is giving her some adventures long (like 400 years) ago before John Carter showed up and it is a fun read and gives artist Carlos Rafael a chance to draw scantily clad woman with huge tracts of land. Some books I get for just entertainment and both books are telling entertaining stories in a setting that I love. Not everything needs to be a literary masterwork and if you love ERB’s Mars books you should check out these books. 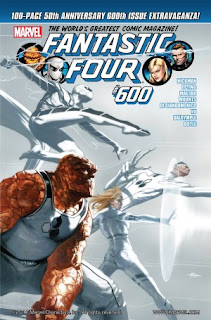 I’d also like to give a quick mention to Fantastic Four #600, written by Jonathan Hickman and illustrated by many artists as we got 100 pages of new material (or so I have been told, I didn’t count it). The bang for the buck was there and the inevitable return of Johnny Storm was well done. I wasn’t shocked as it was a foregone conclusion they were bringing him back. The one thing I still have a gripe about, even with the size and scope of this issue Jonathan is still moving this story forward at a glacial pace. The Fantastic Four has some cool concepts and neat stuff happening but I like stories that have endpoints and that is what is missing here. Worse it will now be two books with FF and the Fantastic Four as ongoing books. I know this is Marvel’s goal to have all the main books have multiple titles, but for me it means too much of something is not always a good thing. At least with Captain America and some of the Avenger titles, each book is their own thing.
In general a good week, with books like Scalped, I Vampire and others it is hard to not have found some good stuff.  Added to my canceled DCU books is Justice League International which I just saw as too much of a generic super hero group book. I have mixed emotions about the new DCU but this was so old school as to not hold my interest. OMAC is also being chopped off my list, it is just too frenetic and I have no clue where the series is going. Neither were books I read, but in looking at December 7 books that are due I realized I had no desire to read either book. I may give Blue Beetle #4 a chance if the commenter from the last post gives me some insight as to why he claims to know where this book is going. Finally I dropped Spawn. The book is too long form and probably reads great as a trade but I’m 12 issues in and the story has barely moved forward.
Due to DC basically ignoring the fifth week next week’s list is small but pricey due to 2 hard covers. The list is The Definitive Flash Gordon / Jungle Jim Collection, X-9 Secret Agent Corrigan Volume 3, Mouse Guard Black Axe, Cobra, Near Death, Warlord Fall of Barsoom, Thunder Agents, Spacemen, Fables, Legion Secret Origins, Batman Odyssey (an almost unreadable travesty that is tarnishing Neal Adam’s legendary status),  Fables, Daredevil, FF, Red Skull, Thunderbolts, Ultimates and Uncanny X-Men.
That’s a wrap, see ya next week.
Posted by Jim at Monday, November 28, 2011